Looks like de Havilland is off the hook for this one. I spoke to a guy on the ramp whose girlfriend works in the tower, and it turns out the gear didn't collapse at all. They just forgot to put it down. The airplane in the picture is partly supported by a now-mangled radar dome on its belly. He also confirmed that no one was injured.

I taxied by it today but didn't get a good shot, as clearance delivery called me back with my transponder code right at that moment. The props, as you could see if I had a cleaner side window, are pretty chewed up, but the fuselage appears to have been somewhat "protected" by the ridiculously expensive radar dome, the wreckage of which must have been removed. I couldn't see wing damage from my vantage point.

Poor pilots. I was thinking as I watched it being swarmed by firetrucks yesterday that that was going to entail a painful amount of paperwork. According the the controller's boyfriend, the tower shares responsibility for the gear up landing. The controllers are supposed to identify extended landing gear and have standard calls to make if they can't see it. I'm not sure I believe him. Long ago Canadian controllers made a "check gear" call to retractable types, and the pilot would acknowledge with "down and locked" or "three green," or the like. The standard joke when the controller accidentally issued that challenge to a fixed gear pilot was "gear down and welded." They stopped doing it officially years ago, but some controllers continued until quite recently, when I believe it was actually banned. Nav Canada, the new tower agency was concerned about liability issues if a pilot thought he could rely on that reminder. I've never heard a "check gear" challenge from a US controller.

I can understand that a controller might feel responsible if an airplane landed gear up on his watch. "I should have seen it!" he might think. But will the FAA controller in question seriously be found at fault for not reminding the pilot to move the wheel-shaped switch to the down position before the flare?

In other news, the airplane I fly is now bigger than a commercial jet, assuming the commercial jet is the one pictured below, a Dayjet Eclipse 500. It has a greater range than I do, but a smaller cabin, smaller payload and smaller engines. (Okay, maybe I'm cheating a bit on the engines. They are physically smaller, though). Hey I wonder if it has a toilet. 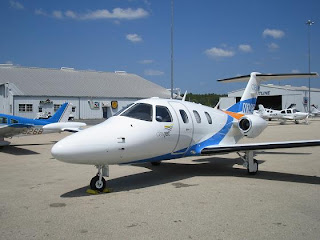 I can imagine the passengers squealing, "oh my god, it's so small." Passengers say that about anything. I once overheard someone emphasizing the tininess of a B737 with, "It only has one aisle!" Meh, whatever. My hotel room is huge. It's a suite. I think if you took out the dividing walls you could park my airplane in here. The Eclipse 500, easliy.

There are some airports in the US where the tower will do a gear-check on landing clearance; the only ones I've observed were airfields with a military presence, and military ATC. This was the case where I learned to fly (KLMT). Landing clearance usually just came with a reminder "check wheels down, runway xx cleared to land".

As for the Dash.. I don't know what it will take to get it airworthy again, but my aircraft was landed gear-up by a previous owner. In fact, when I was airplane shopping most of the retracts I saw which were 30+ years old had been gear-upped at least once. Repair of this particular incident came to the tune of about $20K, in year 2000 USD, including new prop ($8K) and engine tear-down inspection. Damage to the aircraft itself was surprisingly minimal: New nose gear doors were necessary, and a couple of belly skins were damaged, which were simply replaced... of course this was for a ~2500-pound Mooney that touches down at ~60mph, and not a Dash 8 with considerably kinetic energy and mass.

I've seen a few gear-ups, but this sets a record for the largest airplane I have seen do so.

A controller was honored for noticing that a 747 was about to land with its gear up.

Military controllers are required to provide gear checks to military aircraft. At joint use airdromes the tower is often a mix of FAA (or private ATC) and military controllers. Thus it was likely the controller was required to issue the landing clearance "Check gear/wheels down, cleared to land". Under normal conditions they would not do the same for a civil aircraft.

When you have the big guns, you get to decide how things are done ;-)

Yes, you can order your Eclipse 500 with a potty. About $1.8m the last time I played with the "Configure My Plane" feature on their web site.

Not fully certified, though. I think it can't do single pilot IFR at night, or something. Or maybe you can't FLUSH the potty. Dunno.

fy: Awwwww. Screw the big guns. Shouldn't those who are entitled to operate the big guns be the ones who are wise, quick and sharp-minded?

Imagine a military dude who does not question anything in place of the commercial pilot in this situation.

In Martinsburg WV (KMRB) there's a controller who reminds *every* airplane to put their gear down. Even a self-identified Cessna 172.

At some airfields in the US, the controller staffing is partly military, and partly civilian. And some civilian controllers are former military controllers. And some have seen gear-up landings. So, there are reminders some places with some controllers.

I fly often into Fort Huachuca (colloquially known as Fort Sneeze - pronounced "Wachooka") which is also Sierra Vista Municipal Airport. Since the tower is manned by the military, they always give "N12345, check gear down, cleared to land".