California is a rich state, and a left-leaning state. A lot of public money is spent looking after people, protecting them from the ills of the world. We saw this during the fires, in earthquake preparedness, in excellent highways and in the crazy labels on pretty much every business alerting me to the presence of carcinogens within. The hotels have an interesting feature which I'm sure is part of the California building code.

To begin with, emergency exit signs are green, not red as they are where I'm from. That makes sense, because in case of fire, you don't want people crawling towards the red glow. Many US exit signs are green, and I think I may have seen some in Canada, too, but certainly not all. But the part that caught my attention today was that the exit signs are on the floor. This makes sense too, because in case of fire you're supposed to be crawling along with a wet towel over your face, down by the floor, because that's where the remaining oxygen is supposed to be. So you crawl towards the green glow of the eye-level exit sign. Not like the Florida hotel in which the stairwell door opposite mine had the word "exit" spelled out in masking tape on it, even though the unmarked glass door right next to it led directly outside.

In other news, the replacement oleo we sought yesterday was easily obtained and installed, and we're back in the sky without trailing hydraulic fluid. We didn't even fall back on plan B, to get an oleo from a screen door. (That last is of course a joke, but we joked about it a lot. Sometimes you want to just take something to a hardware store, not say the word "airplane," and find a replacement). 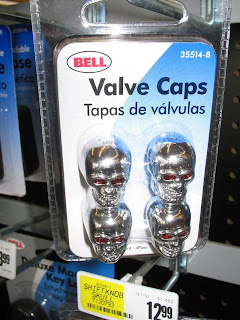 I was in a car accessories store looking for an oil funnel when I saw the item pictured above. After a a few minutes of longing to buy them, just to see the expression on my chief pilot's face when the airplane turned up at home with little chrome skulls with ruby eyes on all the tire valve caps, I realized the fundamental difference between regulations for cars and airplane maintenance.

With a car, you can install or use any part, accessory, fluid or substance that is not expressly forbidden by law. You might void the manufacturer's guarantee if you put the residue from your deep fat fryer in your crankcase, but you are perfectly within your rights to do so. You can put a skull or an 8-ball on your stick shift. You can replace all the standard switches with switches upholstered in fur. You can string lights around your tire rims, or glue plastic army guys and severed Barbie heads all over the hood. It's your car.

With an airplane it is absolutely the opposite. You may specifically not install anything that is not a certified aircraft part, and you may not remove anything that is supposed to be there. Technically I could probably get in trouble from Transport Canada for pimping my ride with a sheepskin seatcover that I bought at the Auto-Mart. I must use and record the type of aviation grade motor oil in my engines. I need government approval for any modification to the airplane: a hole, an extra battery, a different kind of seat. Most modifications aren't worth doing, because of the cost of the approvals.

Funny bits about airplane customization. I think fuzzy dice hanging from the compass would be OK but only for part91 flying.

And yet one more advantage for amateurs with EXPERIMENTAL category airplanes. ( in 1 inch letters plainly visible. ) We can do quite a bit without paperwork or even mechanics, and I feel like a test pilot every time I get in. Wait - maybe that's not a good thing.

At least in the US, a sheepskin cover would be fine, unless it were permanently attached to the seat. The old joke is that if you attach something with velcro, it's ok, but if you attach it with glue, you need approval.

Sheepskin covers, I'll bet there is some violation there simply because they might be flammable. Notwithstanding the thousands of pounds of Jet-A in the wings. Sometimes regulations are a good thing but forbidding chromie skull caps is going too far!! We need to be able to pimp our planez yo!

If you had an A&P watch and you updated the W&B would you be able to pull it off? ;) Now that's gangsta!

Yay! for a nearly Welfare State! You should def have got the skullcaps, (and installed them with gloves on)

If you attach something with velcro, it's ok, but if you attach it with glue, you need approval.

But I use velcro that attaches with really strong glue. Living right on the edge, eh?