The Wilds of Yosemite

We're wrapping up the job in the Fresno area, and the project manager gives the flight crews a day off and the use of a vehicle, so we drive to Yosemite National Park. It was right there in the airplane but our vehicle is land-based, so we have a couple of hours drive up to the park. For some reason I never think of mountains when I think of California, but this park is on top of a mountain.

We keep driving until we reach the park gate, where there is a $20 per-carload admission fee. I notice that the fee is $10 per cyclist, and can't help wondering why they charge four people on bicycles twice as much as four people in a car. I wonder what they would charge a carload of people with four bikes in a rack on the back. Were I ever to cycle up this mountain to this park, accompanied by more than one other cyclist, once I had recovered from the effort, I would ask the park ranger to please pretend we had a car, as much to make the point as to save the money.

This happened the first week of April, and the continuing road was closed due to snow. We parked just beyond the park gates, and walked up Mariposa Grove Road, over the snow drifts. It was maybe three or four kilometres up the road to the trailhead. We were impressed by the volume of snow that was packed on the road. It clearly snows a lot here. In California. It's not all Baywatch. Walking up the road I was thinking to myself, "and if I have to pee, I can just go behind a tree!" I've spent so many hours this week strapped in the cockpit that being able to pee any time I like is a notable luxury. I'm laughing at myself for this, when another crewmember mentions exactly the same thing. I remember when I added "and you don't need to go to the bathroom" to my list that defines when life is good. (The rest of the list is: food in your belly, not too hot or too cold, not in pain, contact with people who appreciate you, and a safe place to sleep).

Before we got to the end of the access road we started seeing the giant sequoia trees. They're not the same as giant redwoods; California has more than one kind of giant tree. 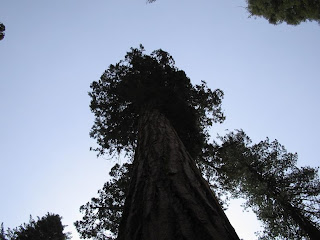 From the parking area at the top of the road there was a trail continuing through the snow among the trees. It was meticulously signed with the short distances to the various trees indicated in tenths of a mile. I get the idea there a lot of people who visit this park can't walk very far at all. It's very accommodating for the park to set it out so clearly so people with no experience reading maps or walking in the woods can choose something at their level of ability. I wouldn't recommend that someone for whom 0.3 miles is more achievable than 0.5 miles come here in this season. The snow on the trails makes it interesting, and in other places there are giant puddles that we variously skirt, leap, ford and wade right through, depending on our shoes and leg length. And obviously anyone daunted by a mile walk hasn't walked up the snowbound road. In fact, so far, no one has. We were the only ones we saw on the way in. (The closed road was only closed to cars, and we saw a number of people coming the other way on our way out, so I guess we're just early risers). 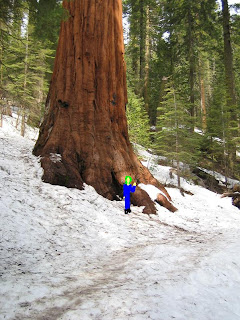 The really old trees had fences around them to protect them from people walking on the ground near them and damaging their roots. I thought that concept was a little fantastic, but we kept our distance. We could walk up to some of the younger trees. The bark was very thick and quite soft. I think I could have punched it full strength with my knuckles and not hurt myself, because of the sponginess. Most of the giant trees had fire scars on their bark. One of the reasons for their longevity is resistance to fire. In fact, the park service used to protect the trees from fire, but then researchers discovered that they needed fire in order to reproduce, so now they set controlled fires. 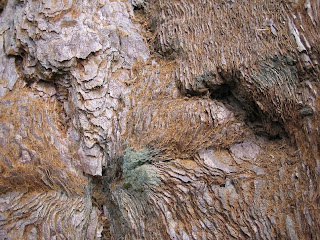 This is a somewhat superficial post, "We went to the park; we saw big trees," because the third part,"we learned interesting things about big trees" was abruptly cut off. We'd just reached the Grizzly Tree, apparently the oldest one in the forest, when someone's cellphone decided that now was the time to deliver supernatural reception. We're in a forest in a national park and there's cellphone coverage. Bah. It was a message from company. There had been a miscalculation and we were needed back at the airport. That's the way it goes in aviation.

So we all walked back down the snowy trails, back along the road, and drove down out of the mountain. We just got a tiny taste of the park. Yosemite is a huge park, mostly wilderness, with lots of opportunity to camp and hike, and actually take responsibility for yourself. The brochure said that people drown every year from swimming upstream of waterfalls. I'm not glad to know people drown, but I'm glad to know there is a wild place here where people can come and experience the real world, hazards and all. I was afraid that California had been turned entirely into a foam-padded theme park where people were completely protected from themselves.

As we drive back out of the park, everyone's cellphone comes alive with text messages. They are glad to have us reply that we are on our way because they didn't expect to be able to reach us in the park. We could have pretended they didn't, but we're responsible. We don't go swimming upstream of waterfalls, either.

This is somewhat ironic. I am right this very instant figuring out logistics to do a week-long hike from the east-side of the Sierra through Yosemite park and end down in the valley where most folks drive to.

About the earliest this can be attempted, due to snow, is mid-July... yes, we have winter here too. If you ever get the chance, I highly recommend taking some time off in the high-country of the Sierra, where the valley floors are ~10,000' and the peaks a few thousand more tower above. Its a truly different and wonderful experience, but requires several days' hike.

The week-long hike sounds fabulous. I should do more things like that, instead of you know, sitting on my butt blogging.

Yosemite is one of my favorite places. It's birthday is 1 Oct, the same as my oldest and we would try and go up every year to celebrate both their birthdays.
I love the valley and we would tent camp at a place called lower river and stand and look up towards the falls. When the 100 year flood came, it wiped out that campground and many others. We are planning on saving gas money and going up there this fall for a retreat. The motorhome needs to be aired out and go on a journey and I need to see the valley.
There was a special on the other night about a TV personality (public tv) who went on the 2 day climb up Half Dome. Now way, no how. 900 feet up using cables and wooden stanchions from the base of the back of the dome. I prefer the drive to Glacier point and the astronomy lectures. More my style.
I hope you can go back and see it when the falls are thundering and the river runs.

My father worked in Yosemite for a couple of years during the 70's. It's wonderful magical and sometimes dangerous place.

Problems happen when folks who are used to a Disney experience hike outside the Yosemite Valley Floor(which has barriers around the most deadly stuff), and wander around and over cliffs.

Glad you were able to see the big trees, amazing living things. Yes, walking on the roots can damage the older ones. If you noticed any of the toppled ones, they have a ver shallow root system for someting so large.

I was lucky enough to spend a week near Yosemite a few months back. Even with the snow I loved it.

Without personal transport I didn't get to see the big trees, so I shall have to go back sometime.

I too found the lack of guide-ropes and such unexpected in the rather litigious US, but was thankful that the wilderness was allowed to be wilderness.

Unfortunately, at least one child died while I was there, and one within the previous month (from long falls).

YVR is no Yosemite, but next time you're in the area let me know if you want to go stomp around the north shore mountains for a while. I'm always up for a bit of hiking...