One of the problems I asked to be looked at during the maintenance stop was that the right gear door was occasionally dropping down after shutdown, instead of staying closed over the opening into which the wheels would retract after takeoff. The mechanic looked at it, made a little adjustment to the oleo, and said it shouldn't happen again.

It did. Only worse. I did one day of work, back on the jobsite after maintenance, then the next morning when I came to preflight the aircraft I found the door not only open, but leaking hydraulic fluid, the lifeblood of the landing gear extension system, onto the ramp. It was a pretty steady flow, one big drop per second, and appeared to be coming from the oleo controlling that door.

First order of business was to stop my airplane from bleeding all over the ramp. I took my pocket knife to an empty one-quart oil container and cut out one of the side panels, making it into a small, flat one-quart bucket. The airfield was all neat and tidy, so I had to scrounge in a decorative garden arrangement (yes, there was a decorative garden arrangement on the apron, these California airports are fancy!) for the all-purpose northern airplane accessory: a fist sized rock. I put the rock in my improvised drip tray, to keep it from blowing away. Now I needed a spill kit for the puddle already on the apron, and someone who could apply first aid and a blood transfusion to replace what was lost. (My hydraulic fluid is red, inviting all these blood metaphors).

There was a helicopter operation on the field, and I knew that their mechanics were in early, so I walked over to see if a simple hydraulic leak was something they'd be able to cross the streams to help with. They said no, but recommended another outfit, and while I was in their hangar I got to ogle a very shiny R44. I saw a curious chart, visible through the plastic window, so I asked them about it. It seems that Vne, the "never exceed" speed on a helicopter is a function of temperature, and very much so. I don't know why, so rather than googling it and coming up with a half-baked explanation, I'll let one of my helicopter flying readers explain it. I'm guessing it has to do with air density and those long flexible airfoils called rotors.

The other maintenance unit was locked and unresponsive on the call-out number, so I cancelled the flight. I swapped places with the other pilot, because she was pushing monthly duty time limits and I wasn't, so I flew the other, functional, airplane while she sought out someone who could fix the broken one.

After work my improvised bucket was getting full, so we bought a bigger bucket at the dollar store. And, as always happens at the dollar store, because everything is only a dollar, we bought a bucket for the other airplane, and some extra brightly coloured spray bottles too. I guess my distant ancestors who eagerly sought out brightly coloured things got more tasty ripe fruit to eat than their competitors who didn't care one way or the other, and thus passed down to me an attraction to colourful objects. I blame as much as possible on prehistoric genetic selection. And as I look at my shiny new bucket, I can't help thinking about the lolrus, subject of grammatically dubious captioned photos about the search for a lost blue bucket. 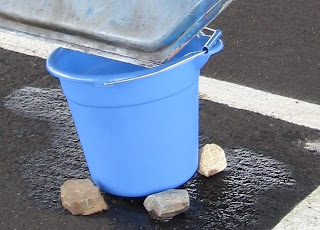 Yikes! The TSA knows you have a pocket knife.

I also have a socket wrench set, a hatchet, and several fist-sized rocks. Oh ... I have to tell you the story about the friend who had rocks in her carry-on. Fortunately rocks are not on the banned list. Hockey sticks are, though.

So the flashy new R44 that you saw with the Vne chart...

Did that happen to be a ROFLCopter?

Don't let those SBA people know you're stealing their rocks. Back in the day anarchy reigned supreme and rocks were good weapons at Isla Vista.
The R44's are made down here in TOA. Nice plant. Our "esteemed" president made an appearance there a couple of months back. Gotta appear to be with the working class ya know.
The .99¢ Store carries my favorite candy, but I stay away from the plastics. Even the colored ones. LOL.
Stay safe.

I had the original maintenance at SBA, but the bucket incident occurred elsewhere. And I washed the rocks and put them back. I wouldn't want to be arrested for rock stealing.

Your guess about VNE in helicopters is mostly right.
Remember that helicopters are unique in that while most of the machine is flying in one direction, half of the rotor is flying in the other.
The "advancing blade" obviously has an easier time producing lift than the "retreating blade", because you ADD the relative wind to blade speed on the advancing side, while subtracting it on the retreating side. Going faster in the helicopter makes the condition worse. Go fast enough in some machines and you can encounter a phenomenon called "retreating blade stall".
(The retreating blade finally reaches a critical angle of attack and can no longer produce the same lift as the advancing side.)

Now, a trick question...
On which side is the "retreating blade"?

My immediate instinct is that the rotors turn clockwise when seen from above, but I'm not sure I've paid enough attention watching them spinning down for that to not be a guess. That would put the advancing blade on the left and the retreating on the right. Unless you were going backwards.

You said it was a trick question, so I'm guessing the trick is "it depends" on which model of helicopter, much as American-built fixed wing singles tend to have clockwise rotation seen from the cockpit, but in the UK the propeller goes the other way.

How about relative wind? Which direction is the helicopter moving?

I believe I recall Ruskie and French built helos turn one way, and everybody else turns the other. Further, I think "everybody else" turns counter-clockwise, because I remember the nose tended to wander to the right as torque was increased.

...Unless you were going backwards...

Or sideways. That was my first thought on why it's a trick question.

Some helicopters have rotors that go both directions, do they not?

Right on all counts, folks.
Amazing machines, these helos.

And some copters have counter-rotating rotors, either coaxial or interdigitating...(how about the long "flying bananas", with rotor on fore and aft?).
Your bucket reminds me of what we called "the RAF's brownie sheet", a huge, shallow rolled-edge steel drip pan we would find under dripping Vulcan's at 0200hrs on their parking apron. Loved calling their commander to wake him and get the trouble fixed.

About that flying banana..yeah, Chinook, see link above about rotating in two directions.
Oh, and intermeshing rotors:

And I thought it was going to have something to do with the advancing blade going transonic... live and learn. Now that is a great bit of aviator trivia I can throw out at the next rain-day hangar flying session. Thanks!

Shockwave issues are indeed one of the things you'd eventually encounter with high speed helo flight. But a typical real-world helicopter is going to out-run its retreating blades as described here first.