I realized after I made the early morning pick up arrangement that I had been going east, so that made my pick up an hour earlier by body time, but it still gave me legal rest, so I'm glad I did it.

During the van ride up to Mount Rushmore, in beautiful sunrise light, I saw that it wasn't really tourist season yet. Many museums, campgrounds, horseback riding outfitters, and souvenir stands along the road were still closed for the season. There will be a lot to do here in a couple of months, and it's a nice, relaxing place to visit. You could seriously bring a family here for a week and have a good, albeit somewhat clichéd, vacation. Just don't come in the first week of August, during the Sturgis Motorcycle Rally. Apparently every motel, hotel, campground and condo is full for a hundred miles around.

Today the road itself was pretty much empty. I know what I'm coming to see. It's the faces of four dudes carved in the side of a mountain. I catch my first glimpse as we go around a corner, but it's no surprise. It's a much lampooned monument, kind of a piece of American kitch, but it seems worth a trip. I'm emphasizing the "well whatever" aspect of my decision to visit this tourist attraction, because it contrasts with how I really felt after visiting it.

It was definitely worth the trip. I think anyone would like to come and see this. It is, to begin with a national park. Not as big, rugged or pristine as Yosemite, but still a park. Arriving from the parking area, or in my case the van drop-off point, you walk along a straight avenue of state flags, smooth paving stones under your feet and columns at the side proclaiming the dates of entry into the union of the various states. There's a kind of portico as you enter a terraced viewing area, and from there you can see the faces clearly. They are very white. Park employees clean and seal the rock regularly to prevent erosion by ice and plant roots. 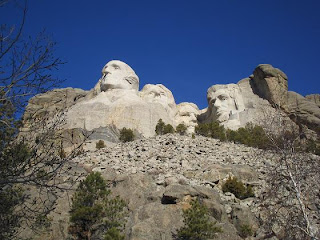 If you come here, you have to arrive like this, by seven-thirty in the morning. It's quiet. Trees, mountains, fresh air, and only the sounds of a few birds and little sticks falling from trees. No one around is around but these four memorialized presidents. You can walk down the stairs from the viewing area and reach a boardwalk. They don't let you walk on the rocks themselves at the base of the mountain. I guess that goes to show how many visitors they get. I'm amused by the very precise warning about the length and difficulty of the trail. It's a boardwalk, less than half a mile long, described as "strenuous." I envision the people who aren't here with me today, elderly or unaccustomed to walking, who have made it down the avenue to the viewing area but are incapable of making it around the boardwalk. Nevertheless they have made a pilgrimage of sorts to this national monument. Maybe they venture out and discover they can navigate such a strenuous trail. Maybe such literal small steps will lead them to venture into more rugged parks. There's something inspiring about this place. The day before yesterday I was looking at giant Sequoias in Yosemite and now I'm looking at giant presidents at Mt Rushmore. How many people get to do this in such quick succession, ever?

Even if it's not part of your culture (I had to identify Jefferson by process of elimination (Washington is the big-nosed one with the square hair, Roosevelt wears glasses, and Lincoln is the skinny, bearded one), it's worth the trip. These were visionary men who are honoured here, and whether you are happy with the state of the nation now or not, their legacy shaped it. But it's not just a patriotic monument. It's an engineering marvel built with 1930s technology. That is, mostly by hand. It's a work of art. It's a human interest story of someone who spearheaded a ridiculous project, a monument that was supposed to draw visitors to the middle of nowhere, in an era before most people owned cars, and before the freeway network was built. He must have been a little bit mad. He did envision his work outlasting his civilization, and standing like the Sphinx or Ozymandias for future generations to wonder at.

As I finished my circuit of the boardwalk (yes, I managed the strenuous trek), park employees (in Smokey-the-bear style ranger hats!) were arriving, and at eight o'clock the buildings opened giving me access to a museum of information on the project, a bookstore and a gigantic gift shop. (They sold souvenirs from every state, so theoretically you could come here and "do" the whole nation. I thought that was pretty funny.) And it's still a fine park. Deer grazed beside the parking lot and along the road with utter unconcern for anything but the spring grass.

I would go back to see it again. I probably will. Also I owe a beer to the maintenance supervisor at the West Jet FBO. If you stop there, please buy him a beer and tell him it's on behalf of the stupid Canadian chick in the pink sweatshirt, the one who needed help starting her own airplane.

My first visit to Mount Rushmore was indeed early in the morning. I was driving back from a camping trip in the Wyoming mountains with a friend, ran into nighttime darkness near the Wyoming/South Dakota border. We spent the night in a little roadside park (I slept on the bench of a picnic table), rose before the sun, and drove the rest of the way to arrive at the Mount Rushmore National Monument (it's a Monument, not a Park) right at dawn.

It was simply stunning. Cool, quiet, and massively impressive.

We waited for the gift shop to open, bought some state-shaped refrigerator magnets to bring our collection into sync with our travels, and left for home about the time everyone else was arriving.

Our first glimpses weren't quite "around a corner". Many of the roads in the area have short tunnels, and the tunnels are aligned so that the faces are framed by them as you approach. We went through one such tunnel before sunrise, and the monument was clearly visible in the pre-dawn twilight.

"needed help starting her own airplane."

Come on now, You can't say something like that without explaining the story. I eagerly await the next entry...

After reading it though, I had this hilarious image of dozens of blog-readers stopping in to a small FBO in the midwest and buying a beer for a very confused maintenance guy on behalf of "the stupid canadian chick in the pink shirt"

Why do visions of a crop duster come to mind???!!

I visited Mt. Rushmore a few years ago and came away feeling like it was the biggest piece of graffiti I'd ever seen. An insult to the natural setting.

After studying a little more of the history of the Black Hills and the Indian Massacres - even more so.

An alternative point of view...

It strikes me as strange that both the USA and Canada will head boldly off into the world to put an end to other nations' "ethnic cleansings" and "cultural genocides" while taking so little responsibility for our own sad history.

In 1992 during operation "Golden Coyote 92", a Sikorsky "Sky Crane" helo was utilized to remove much of the dump behind the monument's scultures, left there since 1941.
While I can imagine it's original sculptor, after a frustrasting day of blasting and jack hammering, chucking the occasional empty bean can or beer bottle off into the darkness "over the top" and waiting for the satisfying crash, but the debris left from 1941 apparently were pretty major to require this.

I,too am looking forward to hearing about your starting-problem. You're obviously well clued-up on the intricasies of I.C. engine operation,so this must have been something out of the ordinary.
(I had many years of motor-mechanicing and STILL get caught -out occasionally!)
So, do tell!- Pretty please!

Anyone who wants to hear what a complete idiot I was in South Dakota is welcome to buy a beer for the West Jet maintenance supervisor. I'm sure he will be happy to regale you with the tale.

I read your link, Aluwings. So the conquering nation hacked images of the faces of their leaders into someone else's sacred mountain? That is definitely desecration. I did know about the loss of life, but I didn't associate it with any site in particular. I know there was a general policy of genocide during the settlement of the American West.

I'm willing to look at the construction project itself as a product of its times, but now I'm disappointed that the present day interpretive materials said nothing on the subject.

I once knew some Supai from Arizona for a while, and much later spoke "off the tour" with one of the interpretive guides at Yosemite about "sacred ground". For the Supai kids it was a joke as to how easy it could be to get the wind up on us "long noses" with the "sacred ground" deal. When all of the earth is an expression and dwelling of your spirits, and you have been burying your people in the vicinity for a few thousand years or so, every inch IS sacred. So, anytime someone wants to put in a minimart or Interstate....I had to laugh with them. Now I'm gonna hear the backlash; oh well.

You could have also gone to the Crazy Horse Monument, just a few miles away from Mount Rushmore, where the Indians are busy doing their own "desecration" on an even larger scale.