I'm supposed to go to Toronto next. I find this out while sitting in the hotel lobby, so I fire up the laptop but while it's booting use the USA Today method to determine this will take me twelve hours. I'll make two stops, because I want the transborder leg to be short. That leaves less to go wrong on a leg that has legal implications if I don't land where I said I would.

"Don't do it all in one day," my boss says. They don't want me arriving in Toronto too soon, perhaps because it's cheaper to have me stay in a hotel somewhere in middle America than it is to put me up in the big smoke. I acknowledge that and pick some place I've never heard of for my overnight. "You can go somewhere more interesting than that!" I'm told. And finally I get it. Go have some fun. Is this not the best job in the world?

I look again at the cities on the USA Today map that could be my stopping points. Pierre, I recall, is the capital city of South Dakota. And South Dakota, according to some factoid lodged in my head, is where one finds Mount Rushmore, that mountain with the likenesses of four US presidents carved into it. That might be fun to see. I Google it and discover that it's in Rapid City, South Dakota. Rapid City it is. It has the amusing bonus of the airport identifier KRAP.

I know that I must be making many a hobby pilot cringe, or seethe or something. Here I am being paid to do what many of my private pilot readers only dream about doing. I'm flying right across the country, in no great rush. I can choose where I stop, take in the sights, have some good food, and the amazing part is that I get to do it again next month, so I can afford to choose where to stop on a whim, instead of after detailed consideration, to get the most out of what for someone else might be a once-in-a-lifetime opportunity. I'm never sure whether acknowledging good fortune like this is rubbing it in, or just showing that I don't take what I have for granted. This is every bit as fun as working on my commercial licence, all those years and hours ago. And now someone else pays the gas and hotel bills.

I check the NOTAMs and weather, sort out the oxygen, stow everything that should be stowed, and launch over the mountains. I didn't take a lot of pictures on this leg. I think it was turbulent most of the way. There are a lots of mountains on this trip. Also lots of Wyoming. And Wyoming has a lot of mountains, so those aren't mutually exclusive. I like to look out the window at the lakes and mountains and roads and then match them up on the VFR chart with their names. I see Provo, Utah, although I'm not sure I was ever overhead the state of Utah. sometimes I think civic groups should get out there and paint the borders in bright colours. 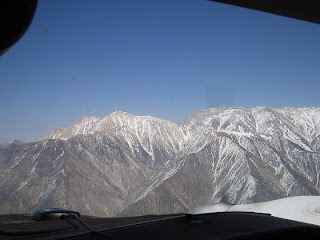 It's actually difficult to see from aviation charts which state you are overflying, because although they mark the borders, it's quite subdued, with the names of the states each side in small type by the border. You have to unfold the chart and hunt around for the nearest border, and sometimes I've missed a border, or a state has an odd shape so I'm not where I think I am. I know where I am on the map it's just that the map doesn't make a big deal of what state any particular point is in. It's like right now you know where you are, but not necessarily your local magnetic variation, or the class of airspace above you. 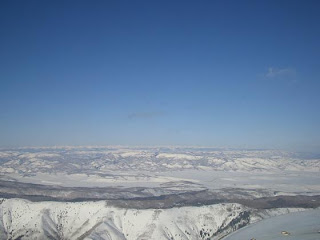 One of my GPS units shows names of states, at the right level of zoom, so when I get really curious I'll use that. With time, the mountains subside into hills and daylight fades into night. I descend into Rapid City overhead a floodlit parking area that I suspect is the famous mountain itself, but I can't see the faces from where I am, and I don't want Team America to shoot me down, so I don't try to look. I find the airport, land, roll out and park for the night at an FBO called West Jet. The apron has some construction and I had to curcle around an area of cones to get to the marshall on the ramp.

After landing I turn on my telephone and compose a text message to my flight follower about my safe arrival. Nothing as verbose as a blog entry. It's more like "Text Messaging--Compose Message--Insert Template--Landed--Send." But on this occasion the cellphone makes an unfamiliar bonging noise and reports that my text message was Not Sent. Ah, well when buying the phone I looked at cell phone coverage maps, and there was always a bit up in the top middle with no coverage. I guess this is it. But I look again at the telephone and I have four and a half bars. I telephone the flight follower instead, explaining, "They don't have text messaging in South Dakota." This doesn't sound quite right. I mean, there are teenagers in South Dakota, right?

I'll have to solve this some other time. I already have a hotel booked, and they have a shuttle, but it's not their shuttle exactly, it's just a shuttle service they pay for, for their guests. I arrange with the driver to pick me up at the hotel at 06:45, next morning not to go to the airport, but to go and see the presidents carved in the mountain.

The nice restaurants are already closed for the evening, so I eat dinner at a 'family' restaurant, that looks a bit like a Denny's. I see as I come in that they have crayons for the kids, in little wooden holders, so I ask for one of those, and write messages on postcards in crayon while I enjoy excellent service and an unexpectedly tasty meal.

And to think I am about to begin yet another desk job in another cubicle in another office.

I enjoy hiking in the Black Hills. I tend to be more of an east-coast wanderer, so any time I can go hiking in a dry climate is a treat. It felt much cooler than I expected without the sweltering humidity that most of eastern North America gets. On the other hand, it took me a while to figure out what seemed strange about the Black Hills. I finally realized that even though I was hiking through forests that looked an awful lot like my familiar Great Lakes area, there weren't many bird or insect sounds. It really was a strange feeling not too hear a cacophony of birds and cicadas in a summertime pine forest.

Oh, but you are rubbing it in. Your are rubbing in why I should invest all this time and money in taking flight lessons. Why it is worth it practising landings over and over again until your sick of it, sometimes literally, all in a time that's unhealthily early after a late night of 'dayjobbing'.

Good Choice of airports, I have not landed there but flew over Mount Rush more on the way to Spearfish South Dakota for my day Commercial X/C, I then waited until after dark and flew back to Denver CO for my night Commercial X/C good times. I particularly like the identifier nothing like going to a KRAP airport :)

Don't say it was the Happy Chef you ate at, I had every entre there in 1984 when billeted next door for a Guard training class.

The airport was small then. I was ten minutes late for my flight home and they offered to hold it at the takeoff position and drive me out (the Boeing 727 had taxied to the end of the runway but had not yet actually left the ground). Someone had bar fronted geese in a big dog carrier in the way in. Never forget it.

My brother was stationed at Ellsworth AFB for 4 years guarding missles and then got married there and stayed a few more years. I flew in/out a couple of times. Mt Rushmore was awesome, I was there in the winter and it was so quiet and peaceful. Went to Deadwood and saw Wild Bill and Calamity Janes graves at the Mt Moriah cemetary. Don't waste your money on Crazy Horse. JMHO. Glad you are taking your time.
amulbunny

If you flew in there from the west, you probably also got close to Hole In The Wall (Butch Cassidy & the Sundance Kid) and Devil's Tower (Close Encounters of the Third Kind). You can't really see Hole in the Wall, but you get a really good view of Devil's Tower from down low. I have picked it out going by at FL350.

Now - re your concern about how lucky you are to be doing - that - really , you deserve it . Surely you worked long hours studying and more in tuition - tisn't easy is it ? You sacrificed - you probably mortgaged yourself - you EARNED all this - YOU made it happen -(Lucky Bugger )