We walk out to where our airplanes are parked side by side and the gear door on the 'repaired' airplane is open again. Ack. My co-worker will investigate, as she's the one scheduled to command it today. We keep swapping planes, which is making the expense records a mess.

My mission takes me to an airfield where there isn't much to see at all, just a narrow runway and a cracked apron, but there is an interesting wind direction indicator. Usually an aerodrome is equipped with a windsock, like the one on the right side of the picture. The sock is on a swivel so as the wind blows it makes the sock stream out , pulling it around so the opening faces the wind. The wind fills the sock so that the pointy end indicates where the wind is going and the open end where it is coming from. Takeoffs and landings should be made towards the pointy end.

At night, if an aerodrome is to be used at night, the windsock is supposed to be lighted. The bulb is somehow wired inside the sock. I'm not sure how they do this without getting the wire twisted to death as the sock turns, but the result is that the wide end of the sock is illuminated, but, especially depending on the angle from which you are viewing it, it can be tricky to determine the wind direction at night. 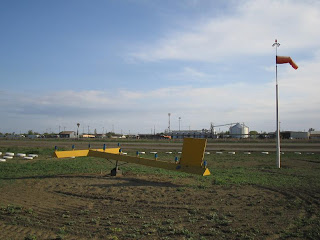 The giant yellow thing in the picture is also a wind direction indicator, called a wind-T. You can see it's built a little bit like an airplane, with a big vertical tail at the end opposite the "wings" of the T. When the wind blows, the T weathervanes around so that the wings are facing towards the wind. The blue lights on the T make it easy to see. There must be some kind of electrical swivel connection to make the lights keep working.

If you like, you can use this picture and previous information to to figure out where this wind-T is located. I have another picture taken at this aerodrome that I can show you once you've worked it out.

When I return to base, I'm told we need another oleo for the airplane. "But didn't you just get one?" It turns out that there's a very short range of allowable adjustment: get it too long and the door will droop after shutdown. Make it too short and the oleo will cut its own seal and cause a leak. Three different mechanics--i.e. the one who worked on the airplane before I got it, the one who adjusted it too short at the most recent scheduled maintenance and the one here who got it first too long and then too short--have been trapped by this irritating design. We'll get another oleo and try again.

"Takeoffs and landings should be made towards the pointy end."

Actually, since the pointy end points downwind, takeoffs and landings should be made towards the *open* end. The saying is that you should "eat the carrot", going from the smaller end to the bigger end.

I used to skydive, and I learned to appreciate the windsock a lot more than when flying in an aircraft.

There is no error in what I posted, which was not "in the direction the pointy end is pointing" but "towards the pointy end," i.e. as if to impale oneself on it. It's the same terminology as landing towards the wind.

Not everyone eats carrots, or pizza, from the pointy end. And any flight instructor who told me to eat the carrot would have got his jaw broken.

Based on your previous report of the Alarus aircraft putting you in the area of Atwater; I would venture to guess that the airport is Madera Municipal. It is also the only one I know of with a yellow wind tee. The others I know if in California are usually orange.

I've used Madera, but the photograph is not taken there.

I'm guessing that an oleo is a variety of gas or hydraulic strut like the ones found on the back of hatchback cars which support the boot lid when in its upright position. Somehow I don't think the definition I found is accurate...

I think the wind-t is a far superior tool than the wind sock.. Heres why:

A lot easier to see from the air. It's hard to see the wind direction from the air using a windsock, especially at night.

Secondly, it makes figuring out the direction of the circuit much easier. Think of the vertical part of the "T" as the runway. The horizontal part is your circuit (The cross wind part), either right hand or left hand.

Overflying the field at night, makes figuring out which way the wind direction is 100 times better than a windsock.

That said, i've never, ever, ever used or seen a Wind-T in real life.

I believe the phrase, as written, could be unclear to many readers, especially new student pilots.

Sometimes when I am reading these entries I love the detail of banal pieces of aviation. I think of how when I first found it I was so new to flying and it was great hearing EXACTLY what the lighting systems were, or how the seats were installed in a larger plane.

"And any flight instructor who told me to eat the carrot would have got his jaw broken."

Oooookay. Painful memories of some leering CFI? Sometimes a cigar is just a cigar and a carrot is just a carrot.

Personally, I prefer AWOS, a most wonderful invention. A pass low enough to see the sock or tee is probably low enough to give you a clue just by drift. But they're nice to have on the gound.

I'm not sure I've seen a plane-type wind tee on any local airports; I have seen one that has a pointy-carat type wind tee. And I'm positive I've never seen any of them from the air. :)

The electrical connection isn't too hard, it's probably something similar to the connections on a DC brush motor. Two brushes contact two metal strips to give your power and return. You might end up a with a few degrees where the tee was unlit, though.

There's a nice orange wind T at Pine Mountain Lake (E45) in California a little way away from the yellow one in your posting -- there's a picture here: http://www.mistrale.com/misc/DSC_5744.jpg

I rather like them in general, but this one's a lot of fun because it's on a little hill next to the runway and you can sit there and have lunch while watching the planes go by...

Actually, a rotatable electrical connection is more likely to take a form similar to that of a headphone jack, with two (or more) co-axial conductors. Thus, you get a connection through 360 degrees of rotation, and you preserve the polarity of the connection (whereas a brush reversed the positive and negative connections every 180 degrees).

On oleos, scoon is exactly right. Both definitions are correct too, because both derive from the latin word oleum, which means oil. Mechanical oleos are shock absorbers that use an oil-based product as the operating fluid. Oleo in the other sense is a Britishism that derives from the fact that margarine is a produced primarily from vegetable oils.

According to this US patent one product uses slip rings. I suppose coupled coils could be used as well, but the losses would probably be too great.

Trix, I understood your direction phrase perfectly, but then I know how a wind sock works. Double entendre mnemonics aside, is someone so sheltered from life that they are unable to determine wind direction from a 'sock without instruction ready for more advanced aerodynamics?

There is a wind 'T' located near my home field too, alas I don't think is is lit.

And manly men always use their molars to attack carrots.

I remember seeing more of the small fake planes when I was small, also.

And manly men always use their molars to attack carrots.

Ahh, that would be the crosswind landing technique.

It was the only question on the private pilot test I got wrong so my flight instructor taught me to remember "fly out of the sock".