My airplane is in the hangar for scheduled maintenance. I flew it here in the dark, with a slight tailwind that brought me in 0.2 h before the maintenance was due, rather than 0.1 before as I had planned. (The 0.1 early was of course planned in case the wind or ATC situation went the other way. I've been here before, and because this is a hundred hour (performed every hundred hours, not taking a hundred hours, but longer than the regular oil-and-filter-change) inspection.

When I arrived I parked outside the maintenance hangar and phoned the mechanic for a ride. Company has rented hangar space and flown one of our mechanics down to do the work, so we have someone familiar working on the airplane, and we're not paying the local shop rate for a simple oil change. I hauled my stuff up to the airfield gate and discovered it was locked, even from the airside. The plate where the combination to get back in would usually be written instructs me to call airfield security to get through, from either side. Both they and my ride arrived quickly and I was allowed out.

Next morning at the hangar they're laughing at my list of snags. Most of it is label-related: the little plastic cover over the emergency exit handle has become brittle from time and sun exposure and cracked into many pieces. The cover isn't essential, but I suspect the exit operation instructions on it are legally required. There are several circuit breakers with illegible labels, and one of the tanks has lost the label declaring its fuel type and capacity. They point me at an electronic label maker and tell me to go for it.

This appears to be one of the areas in which I am mentally arrested at the age of ten. I love making labels. The label machine allows me to change the height and width of the letters independently, print up to four lines of text on one strip of label tape, and choose black or white letters on black, white or clear label tape. I label everything. Now I don't have to squint through scratches to identify my CBs, and I no longer have two radios labelled "Com 1."

I also remove the pilot's seat from the airplane. This is much like one of those twisted wire puzzles, at first appearing completely impossible, without turning off the physical existence of one of the wooden bulkheads. When finally I twist it the right way and get it out of the cockpit, I wonder if I'll ever be able to get it back in. The co-pilot's seat comes out more easily and then three cents (two Canadian, one U.S.), several pistachio shells (definitely my chief pilot's), and assorted small fasteners are no problem to remove. I vacuum the interior of the plane, and am contemplating washing the bits that still have cowls on when I'm called to do another job. They explain my task.

An oil drum has been rolled over next to the airplane on casters, and it is fitted with a hand pump. The outlet for the pump is inserted into the crankcase. To refill the crankcase with clean oil, I should turn the crank handle on the pump backwards until it stops, then turn it forward until it stops again, from stop to stop is about two and a half turns of the handle and equals one quart of oil. I have to add eleven quarts of oil to each engine.

"Wow," I tease our mechanic. "I am going to tell all my friends about the time a mechanic trusted a pilot with a task that involved counting past ten!"

We're just about through the inspection checklist when everything grinds to a halt. An emergency airworthiness directive came out a few weeks ago for this airplane. It passed on initial inspection, but somehow in the last fifty hours, the plug has become out of tolerance. The airplane fails the test and is now grounded until the part can be replaced. It looks fine to the naked eye: the threads seem undamaged and there are only a few nicks and scratches. But a micrometer shows a different story. I could experience a power loss if I go on flying with this one. 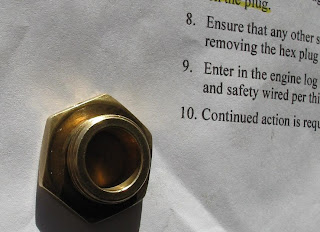 While the replacement part is couriered in, we get an avionics tech to come and have a look at a transponder that ATC reports as intermittent, after several hours of flight. It's a KT76, exactly the same model that died on me in Florida last year. I hope it won't be as expensive as that one was. The tech goes into my avionics bay and sets up test equipment that looks like something Mr. Spock would use to analyze zeta radiation density for Captain Kirk. It tells the tech that the transponder is putting out the right power, and has some frequency drift, but likely not enough to produce the problem. He traces the problem to an antenna the length of my finger and the diameter of a chopstick. It needs replacing, and--this is amazing--he has one, and it only costs $160. In aviation maintenance budget terms, that's equivalent to the pennies I found wedged in the seat rails. 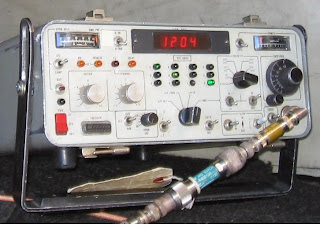 Even more amazing, the antenna replacement solves the problem, and ATC is one again happy with my blips.

That's a good idea about the transponder antenna. I recently replaced my COM1 antenna -- I thought I had a bad radio, but it's better than new with a new antenna. I've had rare transponder problems as well (KT78), and a new antenna is a cheap thing to try.

One might wonder that your transponder had enough power to get enough signal through all those connectors for the test equipment to test!

It brings back fond memories of my youth though.

That 'plug' AD sounds suspiciously like one I got in the mail recently.. but thankfully I haven't had the assembly its part of overhauled recently (assuming it is the same AD), which is what would have triggered it.

Which got me to thinking: This is a Canadian aircraft and operation, right? Do American ADs automatically migrate north? Does Transport Canada make their own independent finding of whether to follow along with something the American FAA has done? Just curious how that might work.

As far as I understand, a U.S. AD applies automatically to U.S.-manufactured plane, even if it's registered in Canada -- the plane is airworthy on the basis of its U.S. type certificate, and you have to comply with the AD to keep the TC valid.

The same wouldn't be true if the FAA issued an AD against, say, a Pilatus or Diamond Aircraft.

It's a little more complicated than that, because Transport Canada may supersede or negate a foreign AD, taking into consideration Canadian operations.

We get our ADs from Transport Canada, but typically they will pass a US AD, especially an emergency one, straight through. You often know an AD is coming, based on an SB. Sometimes Canada even puts out the AD before the US does.