Leaving Rapid City, I overfly the famous South Dakota Badlands. This reminds me that I want to set up a cross country iPod load that has all the songs that mention parts of the country come on at appropriate times. Right now I want Rocky Raccoon and The Legend of Billy the Kid. The Badlands don't actually look much different from any other part of the state, or Wyoming for that matter, but I try to appreciate them anyway.

Civilization becomes denser as both the land and the chart altitudes become greener, with the land sloping gradually down towards the Great Lakes. I've planned a fuel stop in Eau Claire, Wisconsin, because it's on the way, before I hit the rapidly-changing weather of the lakes, big enough to have a good FBO, but not big enough to have ATC delays. I overfly Minneapolis-St. Paul. Hey, Minnesota! I always forget about Minnesota. I don't know anything about the place, except that it's cold there, they are famous for lakes, they have a lot of Norwegians, and the team they sent to a Snow Sculpture contest in Quebec City were skilled, friendly, and exceptionally good sports. I didn't think they were as heavily bestowed with lakes as Saskatchewan or Manitoba, but they have more than South Dakota, so I won't take away their licence plates. 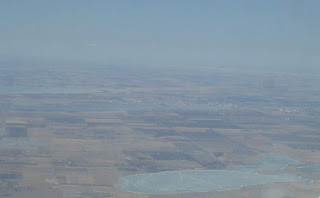 The problem with selecting Eau Claire as a destination is that I didn't know how to pronounce it. I mean, I know how to pronounce it, but I would have though I knew how to pronounce St. Louis and Baton Rouge, too. You never know the local pronunciation of a French-looking placename in the US. For all I know they call it "OAKler." I cheat and tell the controllers I'm landing in Kilo Echo Alfa Uniform. It turns out they pronounce it Oh Clayr, pretty much the way I expected. It's a big airport with a proper terminal, and scheduled service, but there's a little experimental airplane in the pattern when I arrive. ATC asks me to report five miles back. I pick a landmark half a thumbwidth back on WAC chart and report over that. I join downwind and land as cleared.

The guy at the FBO is very friendly and takes my fuel order. I tell him no hurry, I'm going to get a meal. The woman inside the FBO directs me to the terminal and tells me it's good food there, and cheap. Neither of these are attributes I expect of airport food, but I'm not going to be fussy today. I order a burger and it turns out to be really good. It's a real burger patty that someone made, right there for me, not a frozen pre-shaped one. Because I'm in the United States I was asked how I would like my burger cooked. I'm prepared for this, but it still seems strange. where I grew up, government regulations require restaurants to only serve hamburger meat well done, to prevent E.coli infections. I decide to trust my government on this one and order the burger well done, even though I would go for medium rare if it were a steak. And I believe the burger and drink came to less that five dollars.

While I eat, I call to my customs broker. he knows I'm heading north. I need to ensure all the paperwork is in order for my arrival. He says it has been done, all I have to do is file a customs arrival report, and it's okay if I arrive today or tomorrow, my choice.

Back at the FBO I look at the weather into Toronto. There's a low pressure system there and they have very low visibilities and ceilings in drizzle. Arriving special VFR--the altimeter is out of certification for IFR on this airplane--at night, in minimum visibility and ceiling is not really the best idea. If I have to divert, then customs officers need to come somewhere else. It's a recipe for trouble. So I don't go.

This is why I have so few "so there I was" stories. They all begin and end with, "so I didn't go." Boring reading for you, maybe, but you get more blog entries in the end. I get my overnight stuff from the plane, make sure the brakes aren't set, and the nosegear is unlinked so it can be towed if necessary, and ask the woman at the FBO to recommend a hotel. She makes a call and asks if $53 is okay. Sounds like a pretty scary hotel, but I'll be out of here in ten hours, so I accept. It turns out to be a perfectly fine Ramada. Hotels are cheap in Wisconsin.

The last TAFs of the evening call for fog in the Toronto area until midmorning. Uh-oh.

Well, I would have. We just enjoyed 5+ days of poor-snowmobiling weather, known as "spring at last". Coincidentally, Eau Claire is my plan for my dual-XC trip next week. I selected it based on reports of decent food, by the way.

Of all the places...I'm normally based in Chicago but in Eau Claire for a few days on business. If I see a light twin flying overhead, I'll wave. (Though that's unlikely in this soup, I suppose.)

I'd recommend a place called Stella's Blues: good cajun fare, and the locals seem to like it. It's on Madison and Hobart (I believe you would walk north on Barstow a few blocks, then take a short left on Madison). There's also a place called Mike's Smokehouse on Clairemont that serves decent barbeque, though that likely requires a car.

I grew up east of Eau Claire in the Wausau area ( AUW) which now has CWA who has all those amenities you like in a FBO. Try it sometime. There's a Culver's about 10 minutes from CWA and it's a good place to eat.

Wisconsin is the home of the "Butter-fried Burger". ("Honey, hold the defibrillator for me while I eat this and a side of deep fried cheese curds").

Yeah, there's just no other possibility than the lake in the picture above is "Lake Wobegon, where all the women are strong, all the men are good-looking, and all the children are above average"