I'll tell you about the circular yurt construction shortly, but today I couldn't pass up this story about a cat that escaped from its carrier before take-off on an Air Canada flight. Air Canada allows small pets to be carried in the passenger cabin, provided that they remain in approved pet carriers that fit on the floor under a seat. The door to the carrier was, according to the passenger 'inadvertently opened' while the carrier was being stowed. My initial guess was that the passenger wanted to give Ripples a quick snuggle before shoving it under the seat, but apparently security video shows that the CATSA inspectors who opened the cage for security screening did not secure the latch. In any event Ripples saw an opportunity and fled.

So you have an airplane, which is not a really large place, and a cat, which is not a large animal and the other had to be found inside the one. That took them a while because the cat had done what cats do and found the smallest, warmest most inaccessible compartment in the whole aircraft: an avionics bay. This is the airplane equivalent of getting into the computer rack and curling up on top of the server. Or sleeping on top of an old-fashioned TV inside the entertainment unit. They had to access the avionics through an exterior panel to remove the cat and then to ensure that it wasn't a trained terrorist attack cat that had left a little explosive payload in there--or a non-terrorist cat that had simply chewed on something or left a payload of another variety--they took a further delay to inspect the avionics.

I thought Air Canada didn't carry pets in the winter months, but here's their pet policy. They accept them in the cabin, as checked luggage and as unaccompanied cargo. They do have seasonal restrictions on pets in the baggage compartment to keep pets from being baked or frozen during ground handling.

I stand by my earlier statement that there should be a program in place whereby a passenger wishing to have a cat at their destination registers the one they have, drops it off at the airport and on arrival is given one of a similar size and colour, to enjoy for the duration of their stay.

Today someone in an aviation workplace was either amused or insulted, I'm not sure which, by my excitement that he was genuinely using trigonometry for real things. I'm afraid that he may have thought that my excitement and admiration was over the fact that he knew how use trigonometry at all, but really this is just one cool part of a very cool project he is working on. 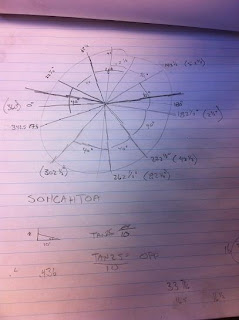 What do you think he's up to?

I'm not currently working with helicopters, either as a charter customer or with a company that operates rotary ring aircraft, but I had to love this trojan horse spam.

Your order for our air commuter services has been received and processed. The chopper will be at your disposal from 3.30 p.m. wednesday to 5.45 tuesday. Once again, the rates are as follows:


With Respect To You
Nellie Nickerson

The purpose of the spam is to get me to click on "Bill.doc," which in the original is a link to an executable. I have to commend these spammers for the completely awesome vehicle they have chosen for what I assume is a trojan horse of some sort. I love the imagination they bring to the rates. I have chartered a helicopter before, and like an airplane the rates applied to the flight time, regardless of the number of takeoffs and landings, and in this case there was no charge for the thirty minutes or so we spent on the ground between flights with the engine shut down. Perhaps somewhere in the world there is a charter rate schedule like this, but I find it hard to believe that in an aircraft where it can be hard to distinguish between takeoffs and landings, that someone would charge over one quarter of the hourly rate per one. I like the fee per extra crew member; in my experience crew usually get about half the amount clients are billed for their services, which implies that a co-pilot could be making $66 a flight hour.

The post from a few days ago didn't actually herald my being back. It was actually an indication that I'd neglected the blog for so long that a post I had written long ago and postdated to the far future came due and published itself. I didn't have a good plan for when to schedule it at the time and had been punting it forward through time for years.

See, I'm a person of obsessions. Some last a week. Some last for years. Some dwindle and are then rekindled. I blogged pretty much daily for almost ten years. (Cockpit Conversation was not my first blog). I blogged because I wanted to, and because it was fun to read the feedback. Recently another obsession has risen to the forefront of my life and seized the time and creative spark that used to go into blogging. If it stops being fun I'll see what comes next.

But seeing as you have all been so enthusiastic about that stray post, I'll see if I can blog once in a while, maybe at a frequency like Sam's rather than my former almost daily posts. We'll see how it goes. I haven't completely lost my habit of taking notes about my flights, so maybe in the back of my mind I'm still blogging.

Happy New Year, everyone. I do like you guys. Thanks for all the fun times--and the nasty times--that you've shared with me.