Today I am in Tallahassee, Florida. Specifically, sitting in a nice FBO, waiting for a member of the crew. The wonderful staff remember us from our last visit and still seem to like us. I am informed that there are free cookies available, information that gladdens any pilot's heart. Free food plus pilot equals happy.

I stand up to wander over to the cookie distribution area and something catches my eye on the runway. Our eyes take in images constantly, and our brain processes them, but I suspect that the brain doesn't actually pass things on to the conscious mind unless they represent something out of the ordinary, or particularly relevant to us. It's why you didn't hear anything, but your friend says he heard someone call his name. Or at least I like to think that's the reason, not that years of sitting near propellers are taking their toll. At any rate, the part of my brain monitoring peripheral vision reports that there is something distinctly odd on the runway. I pull my attention circuits away from free cookies and onto the runway. There's an airplane there, but sitting at a distinctly odd angle. 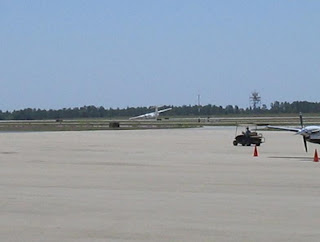 I've just witnessed a gear collapse on what looked like a Dash-8. I believe it's the military version, an E-9A, and the locals tell me they use it as an observation and control platform for drones, used as targets for fighter training. The left main gear has failed.

I point it out to FBO staff and can hear, "look at the runway" echoed in the back room. I can also hear silly things like "why is it there?" and "was that there this morning?" and then I can hear fire trucks. The yellowy-green airport firetrucks race out and surround the aircraft. They spray the runway around it with foam. A few minutes later another set of red firetrucks arrives, probably a city fire company, and a few minutes later there's a third set of ladder trucks and an assortment of police cars and other emergency vehicles. 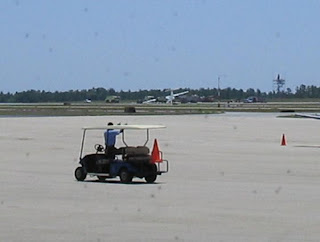 There is no fire evident, and no ambulances arrive, so presumably there were no injuries. We sit around and speculate on whether the airplane will have to be scrapped. Airplanes are sturdy enough for doing what they are supposed to do, but the wing spar isn't designed for balancing on the side like that.

This isn't good news for Bombardier. There's only so many times you can say, "poor maintenance" before you have to admit to poor design. And I picture the military being pretty by-the-book when it comes to maintenance, at least in a training environment. I'm surprised Air Canada Jazz hasn't had one of these collapse, if it really is a weakness of the type. Jazz flies them on long and short routes, and hot and cold and freezing weather, and has done so for years.

I was going to blog this "live-on-the-scene" but I had the pictures uploaded and it all typed in on FBO computer, when the connection died. Before I could investigate why, my crew arrived and it was time to go, so you get it some hours later.

Oh and the cookies were good. They had Smarties in them. Except I guess they were M&Ms, because the Americans don't have Smarties, they think these are Smarties, while Canadians know them as Rockets. There is a historical reason.

My dad worked for deHavilland for 25 years. The Dash-8 prototype had a gear collapse on arrival at its first Paris Airshow. They jacked it up, buffed out the marks, and flew it the next day.

Mmmm seems there has been quite a few Dash gear collapse in the recent past. You are right it doesn't look good for Bombardier.

I think most of the gear collapses have occurred on the Q400 and not on the Dash-8 (similar, but next gen), and it looks like the pieces that fail are manufactured for Bombardier (Goodyear, I think).

Back in the Caribou and Buffalo days, deHavilland got their landing gear from Dowty. Those things never collapse (well, except for the time the US Army tore a wing off one).

Flybe (based in England) claim to be the largest operator of Q400's in the world... and I fly with them (as a passenger)!

I heard about the SAS "problems" a bit ago, so I just hope that Flybe are keeping a close eye on their aircraft!

Apart from that slight worry, they are nice aircraft... the active noise reduction system makes the noise levels almost bearable!

I expected another link to the Dash 8 gear collapse "simulator"! Now I want to play, can you post the link? :)

You have an unattributed link?

Forward motion has a lot to do with whether the wing is still good or not. They're built for big changes in vertical loading, but not to have their tips stuck in the ground or dragged on concrete while the rest of the plane is trying to move forward, resulting in a "ground crab" (versus ground-loop), subjecting them to fore-aft (or, viewing from the top, counterclockwise*) stresses along with the vertical stress.

*"counter-shins" for you UK mates.

Well, the answer is simple. Us Canadian pilots are just better. And I guess we have smoother landings. ;)

Smarties/Rockets look like Refreshers in the UK
We too are due a Dash-8 trip next month (also with Flybe (pron Fly Bee, not flibe apparently)). Fingers crossed.