One area where both aviators and drivers can have fun with customization is in their paint schemes. Most of the airplanes I have ever flown have had boring paint jobs, or paint inspired by the fashionable colours of the 1960s and 1970s. Turquoise and orange, anyone? All the turquoise and orange cars have long since gone to scrap, but there are a few airplanes still flying around in that cheerful colour scheme. I took these pictures of custom painted cars in Santa Barbara. 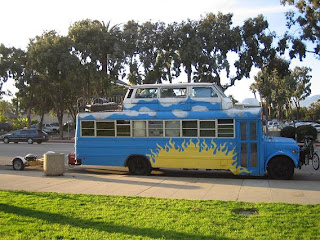 The first one is a bus with a van welded on top of it. It has a bike rack on the front, and a trailer on the back, also railings on top and of course all your standard hippy bumper stickers calling for freeing, banning, impeaching and hugging of various things. It had a generator running. I think that's it on the back. 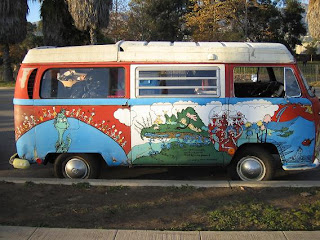 The second one is a VW bus from, if I remember correctly, Wyoming, painted in a Dr. Seuss theme. You can see Red Fish, Blue Fish, the Lorax, the Grinch and I think some original creations made to rhyme with parts of the car. 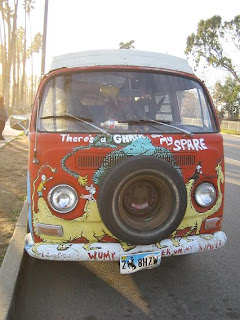 If you were born in Canada or the US in the last sixty years, chances are that you grew up with these characters. Do people in other countries have them too? I learned to read with the Cat in the Hat, but I didn't like him. He was too irresponsible. I was always mad at those kids for letting him in in the first place. 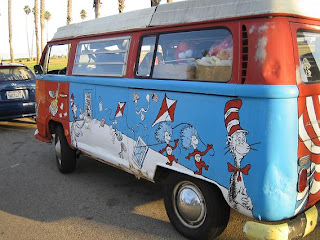 You also get a bonus picture of the shadow of my elbow, for those of you trying to assemble a complete Aviatrix from parts. 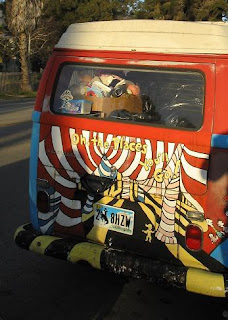 It takes a lot of creativity to decorate a three dimensional object and have t work out just right. One underappreciated place this happens is in airline paint schemes, called liveries. Some marketing agency decides they are going to have light gray airplanes with a red stripe and an animal rampant on the vertical stabilizer, and then they have to work out how to make the stripe look straight and even, and the animal look the same on four different kinds of airplane, with bulges and different shaped tails and APUs sticking out. And of course there are the special paint jobs, like the Alaskan Salmon, Shamu the Whale, Wunala Dreaming, Maryland One, Pokémon and many more.

I was glad to see Oh The Places You'll Go on the back of that bus. That is one of my favorite Dr Suess pieces, next to Green Eggs and Ham. SBA used to be the hippie capital of the central coast. Much more laid back than Hollywood.
Nice elbow by the way. 8-)

Wow, those are amazing plane paint jobs.... bet they took more than an hour or two to do!

'Trix, would you fancy flying a plane with a highly custom paint job, or would you just forget about it once inside, and get on with the flying?

"It had a generator running."

Generator?! Generator!? Hippies don't 'do' generators! They've obviously grown up and gotten jobs... Which is why, I guess, the old VW van (from the years that they truly were hippies), is welded on the roof - now no more than a sad reminder of the glory days... So sad... So sad...

We once had to call back a mechanic in LAX to ask how much longer until he responded to our callout for a problem. Then we had to explain that the reason he couldn't find us at the gate was because we didn't have the usual company paint scheme. He'd just figured we'd solved our problem without him, so he drove back to his shop. We'd completely forgotten to alert him that our ship was not flying in the usual colors. Kiss our on-sked departure goodbye!

Another time a ramp controller in ATL confused us by asking "What's with the weird paint?" We'd rushed onboard so fast at the beginning of the trip we didn't even realize we were flying one of the "special" paint jobs.

They should paint inside the flight deck to match the outside - then we'd remember!

There's a bright pink V35 Bonanza based at my home airport (KPAE) that, apparently, won an Oshkosh Grand Champion title at some point in the 90s. Kind of bizarre.