Pilots have sort of a love-hate relationship with birds. Some learned to fly out of a desire to be like the birds. I came grudgingly to appreciate avian skills while I was a student pilot learning to judge winds and momentum in the flare. I still derive schadenfreude from watching a bird misjudge a crosswind landing, because they usually get it so perfect, angling their wings and tail and settling on a single branch just as groundspeed and vertical speed reach zero. I knew an ultralight pilot whose pinnacle of life experience occurred the day an eagle flew along wingtip-to-wingtip with his tiny craft, checking him out and then seeming to just share the joy of being aloft on a beautiful day. If you've got through any part of a career in aviation without having to reject a take-off, perform a go-around, declare an emergency, or visit maintenance because of birds, then I can't imagine which part of the planet you fly over.

The airplane I flew yesterday bears a scar that we think is a rat strike. I know that a rat is not a bird, but I still blame a bird. See, one day an eagle crossed our path while we were on the take-off roll. There was no thump and no exploding cloud of feathers, so we were pretty sure we hadn't struck the eagle, but after the flight there was nevertheless a small dent, mostly just stretching of the aluminum skin between two ribs on the wing, and some blood spatters. The airport crew reported finding no carcass, and certainly an eagle would have made a bigger dent. Our theory is that the eagle dropped its payload in order to more easily dodge us. I should have gone full CSI on the remains. I'll bet I could have found some fibres and checked them out at the MicrolabNW Photomicrograph Gallery. As it is I just nag maintenance to put the dent repair on their spare time list, because tiny as the dent is, it is a roughness in the wing, and that spot is always the first one to ice up in flight.

The video below (preceded by an ad, you don't lose anything if you just mute the whole video) is from an incident a year ago when a bird strike smashed the spinner on a Dash-8 on take-off. I don't see any damage to the propeller itself, but the damage to the spinner must have caused an imbalance, because the pilots elected to shut the engine down. You can see the blades feathered (aligned with the direction of flight for minimum air resistance). And I have to laugh at the fact that the very terminology "feathered" is bird-related.

They inspired us to fly in the first place. They interfere every day with our ability to do so safely. We can't stop admiring them and we can't stop resenting them. This whole post has just been an excuse to show you this gif. Does anyone not love this crow? It's just a looped gif, but the full YouTube clip shows that it wasn't an accident. That crow was hanging in there for the ride. I suppose it wasn't all that different to clinging to a branch on a windy day, but it's having fun, isn't it?

Why Helicopters Work That Way

I've never studied helicopter aerodynamics, but I witnessed a helicopter crash once, and the event was consistent with the theory that it's principally the integrity of the tail rotor that prevents the helicopter from behaving the way the bluebird expects, but the chicken has an excellent point.

2 Cows and a Chicken Comic Strip on GoComics.com

Also as the days get darker and the weather outside arbitrary northern hotels gets bleaker, I'm tending to agree with these chickens. 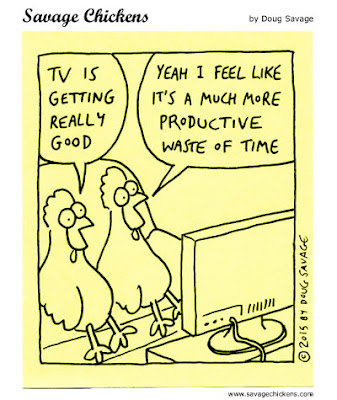 I finally got my logbook up-to-date, every flight entered, every page totalled, grand total calculated. Each line represents one flight, and includes the date, aircraft type, aircraft registration, point of origin, destination, crew, and duration of the flight. There's also a remarks field which I sometimes use to include information like "annual review," "hit an eagle at rotation," "picking up new airplane," or "ferry permit with u/s flaps." Long ago I used to write my first initial and full last name in the pilot in command or copilot field, as appropriate, but that got tiring and sometime over the last couple of logbooks ago I switched to "self" and then "me," with the other crewmembers reduced to initials after the first few entries with their complete names.

The duration blank for each flight is not a single column, but eighteen columns, the whole facing page, in all appropriate combinations of single- and multi-engine time, night and day, pilot-in-command, dual instruction, and copilot, plus additional columns to record time in instrument meteorological conditions (clouds), simulated IMC, and in a flight simulator. For the last seven years I have used two columns: multi-engine day PIC and multi-engine night PIC. I'm even pilot-in-command for my annual training flights, because we hire outside experts who aren't ensured on our aircraft. So on every page I complete there are only two columns I need to total, multi-PIC-day and multi-PIC-night. I sometimes fill in numbers for IMC, or landings, but long, long ago stopped totalling them. There are a even a couple of do-it-yourself columns in which I sometimes track time on floats, turbine vs. piston or tailwheel. I tried to persuade myself to stop carrying forward the times in the columns other than the two that actually get updated every page, unless for some reason I flew a single-engine aircraft or acted as co-pilot, but despite being lazy enough not to update my logbook for three years, once I started updating, I felt obligated to carry those stupid numbers forward, page after page. According to the numbers, at some point in my career I acted as a copilot at night. I can't even think when that was, as the two-crew aircraft in which I logged my copilot time was a day-only operation. I think I must have been acting as co-pilot for new captain. But I'm copying forward that 2.0 every time I turn the page. Also the 13.1 night dual single engine. I have this minor fantasy of renting a single-engine aircraft and flying just long enough, day, night, PIC, and dual, in order to bring all my logged hours up to even numbers. The trickiest part about copying the numbers forward though, is making them fit in the boxes.

Both my single- and multi-engine daytime hours extend to five digits, including the one after the decimal point, and the boxes allocated for the totals are not very big. There are a few possible strategies for coping with this. I generally used a fine-tipped pen and very small printing, but depending on how many 4s, 6s and other digits that don't compress well there are in the total, sometimes I combine this with writing the number diagonally from corner to corner of the tiny box, or writing the decimal point and final digit on a second line. Sometimes I just give up and write the total in the bottom margin, with an arrow pointing into the box it should occupy. I suspect most of you with this kind of time don't bother keeping a personal logbook at all, just hand the paperwork that shows you're legal into company, and then at medical time just add what you've flown in the past year onto whatever total you gave the year before. That's what I've done for the last three years. The real timekeepers among you will be using an electronic logbook that, at a couple of button presses, can extract all your multi-engine turbine time flown on a Tuesday. But I can't be the lone holdout Luddite enough to be still using paper logbooks, but having trouble fitting the big numbers on the page. What's your preferred strategy?

Partial Research is Funnier than None

At 1:35:14 of the movie The Bourne Identity, there's an airplane. It's not important to the plot, just a brief scene to show that Important Serious Guy is going to Paris. It only merited a second glance because Important Serious Guy was going to take the "first flight out" which usually refers to scheduled flights, yet the airplane in question is a Dassault Falcon 900 and the passenger is driven up to the boarding stairs in a limo. It's clearly a private flight. So in between writing the dialogue and getting the location, someone decided that the secret agent guy wasn't going to fly airline, or it was just cheaper for the production to get the plane and the location for one guy boarding a small jet than to arrange a whole airline cabin set, and they missed changing the actor's line. I can even accept that by "first flight" the guy meant, "as soon as the pilots have the airplane ready," and that there's nothing wrong with the dialogue.

It's a three-engine jet, which is kind of cool. Wikipedia tells me that it and the Falcon 7X are the only trijets still in production. On the nacelle of the centre engine we see the aircraft registration N-GIDE. I can't say whether it was the oddity of an N-number followed by a dash and four letters that drew my attention to the fact that the N has clearly been stuck on as a patch, or vice versa, but that is one silly aircraft registration. It took me three guesses to find it as French-registered F-GIDE a Dassault Falcon 900 currently owned by GE Capital Equipement Finance, and based in Paris. The airplane looked like this in 1998, which doesn't match the movie, but the 1998 paint job looks like my high school locker room, so I'm not surprised it would be changed. I'm imagining someone has scouted the location, paid whatever is the going rate is for using someone's airplane as a set for a couple of hours, and got airport permission to drive their limo and camera trucks and whatever around the apron. They put an actor in the cockpit--just one, we'll presume that the other pilot is in the back to greet the passenger--and generally tried to make it look as though it's a US government airplane ready to take this guy to Paris. They slapped a US flag decal on it, by the boarding door, and then someone did just enough research to get in trouble. I think the location manager spotted the F starting the registration and realized that that represented France. They somehow learned that American aircraft registrations start with N, without realizing that they don't have a dash, and they have numbers in them. To me the result is as adorable as a kid trying to hide by covering her eyes: that act of concealment draws more attention than none at all, but it shows that they tried. Had they tried harder, they would have discovered that the FAA reserves the tail numbers N88892, N9748C, and N9747P for use in movies and television, and then I never would have noticed. Probably I wouldn't have noticed if they had left the French registration intact, either. I'm sure the US government leases aircraft in more exotic places than France.

Given that it's the same kind of half-completed research I do all the time for my blog, and will definitely be doing for this year's NaNoWriMo novel, starting today, I hope I'm not alone in getting enjoyment from the funny.