You have at some point probably seen a movie or a television show, usually for children, that uses a gimmick where a story in a book comes to life, or morph into the action of the show. Usually the pages of a book are shown on screen, with text introducing the story, and then a picture. The picture becomes live action, or perhaps the pictures move around in the text. In a movie it's a sufficiently common device that you know if it starts that way, the movie will end back on the printed page with the ornate words The End. But imagine if you were reading a regular, real book. A familiar reference book whose fonts, diagrams, and footnote style have so long been part of your life that you know exactly what to expect of it. Now imagine that a picture or diagram in that book, the one you are holding in your hand, comes to life and starts explaining itself. That's how my introduction to approach plate Geo Referencing went.

An approach plate is a diagram showing an airport runway and the procedures, points and aids associated with navigating an airplane to a point in space from which a safe landing can be performed. If shows the plan view and the side view, with symbols showing where and how to turn, minimum altitudes for each sector and part of the approach, distances, magnetic variation, and type of lighting. It tells you the frequencies for ATC, how much to add to your minimum altitude if using a remote altimeter setting, and has an effective date. The Canada Air Pilot for each region, the physical book in which these things are published is reprinted with changes every 56 days. Most plates don't change from one revision cycle to the next, but the whole CAP is reprinted. When the new one comes you strip the coil bindings off the old one and toss the pages into the recycling. You can tell there's no change if the new plate has the same effective date, worth looking at in case you have inadvertently memorized some data that has changed.

With the Fore Flight electronic flight bag, these approach plates are replicated on the iPad. Instead of paging through the coil-bound CAP trying to guess whether a particular airport will be alphabetized under its own name, or considered a sub-plate of the larger nearby airport, you hold your finger on an airport displayed on the iPad chart until a box comes up, showing all the airports that your stubby finger could reasonably have been aiming at. Tap More next to the one you wanted, then Details then scroll down to Procedures and you can tap Approach and select the approach plate you want. I haven't done a timed test from pulling the iPad or CAP out of the map box, to looking at the desired plate, but I think the iPad is faster. The paper one is easier to read in bright light conditions, even with the iPad turned up full, but in dim light the self-illuminating iPad is great, until it is pitch black dark, at which point it becomes too bright, even if you follow the instructions and turn the brightness to minimum in settings before dimming within the app.

Either way I get the familiar approach plate, very carefully replicated. It's possible to zoom into the iPad ones to read little numbers, easier than pulling out a magnifying glass, but you have to be careful not to leave it zoomed in, when that moment comes on the approach where you glance back at the plate to confirm the minimum descent altitude, and the data isn't on the screen because you zoomed in to see if that waypoint was spelled with an F or a B. A hundred feet above MDA is not a good place to have to pinch or scroll a screen.

The first time I used the iPad for an approach, I had the conventional paper chart and the iPad both out, and it was VMC. I briefed the approach, flew direct the cleared fix and then eeep! the approach plate came to life. A symbolic airplane representing my position appeared on the screen in the position where I actually was. Even though I have used moving maps for years, the appearance of a moving you-are-here dot, Fore Flight calls it "ownship position" on the plate was freaky exciting magic. Ten years from now pilots will stare at old approach plates in puzzlement, unable to situate themselves mentally. This is a huge benefit for situational awareness. It even switches automatically to the taxi diagram and shows me where I am on the airport after landing.

I learned that this was called Geo Referencing a couple of days ago, from an error message. The app told me that Geo Referencing was not available because the plates were not current. What? These are valid until November 13th. (And the error message came up in October). I think American charts are on a 28-day cycle, so the app auto-expired Canadian stuff after that time period. I brought the iPad into the hotel to try and update them. It's just downloading the same set again, I'm sure, but this is hotel internet. It hasn't worked in all the time I've spent writing this blog entry. Why did it not update everything before I left when I selected "pack" for the flight out here? There are a number of things that Fore Flight doesn't get quite right for Canada, and I haven't found a bulletin board or user forum where these things are discussed, to determine for sure whether it is the product and not me who is missing something. I now know that the iPad has to be updated at the same time as I update the GPS database (which comes from the US, on a 28-day cycle).

Posted by Aviatrix at 00:00 8 comments: Links to this post

I've been to this airport before. I remember that you can't buy fuel on Sundays, but today is Saturday, and it turns out we've landed at the same time as another pilot who has a key to the pump, so she can fuel any time she likes. When she has filled the tiny tanks on her Cessna single, we stretch the hose out to our tanks and put in fifteen times as much fuel. (The fueller who filled us beside at the FBO next to the solar-powered coke bottles said we had set a record for the amount of avgas she had ever put in one plane. But we were really empty then. I'd gone a couple of minutes into our reserves, because we were working overhead the airport, and there was another one just down the valley, in case of emergency). We go in and pay, and call a cab, which arrives eventually, in the manner of small town cabs on the weekend.

It's an okay hotel, but it's on the edge of town, and the town is spread out enough that it would take about forty-five minutes to walk to a restaurant. And probably as long to get that cab back again, so we order pizza. We try to avoid eating pizza on the road, because eventually we'll be forced to, and we want it to be a treat. We eat the pizza together in my room, while watching a show called "Naked and Alone." It's kind of like Survivor except without the odd psychological games and the uncanny ability of the women to maintain an absence of bodily hair through the whole ordeal. There are actually two people, and they do start out naked, but have made themselves television-acceptable clothing by the time I tune in. They are really miserable: diarrhea from eating too much fruit, driven crazy from insect bites, and one of them doesn't like seafood, but the other one makes him eat it. At the end they get scores out of ten for their survival skills.

In the morning we come down to breakfast, standard motel breakfast of wrapped muffins, fruit, and make-your-own waffles. We ask the clerk if she can call us a cab. There are no cabs here until 9 am. The airport is not actually very far away from the hotel, but we'll be behind schedule if we throw in a half hour walk with our baggage. Back to the breakfast room to chat with the guys in reflective outwear and work boots. They have trucks. I ask them where they work.

They didn't even know there was an airport around here, but agree to make a small detour to drop us off. I've hitched rides before with a friend of the hotel receptionist, a medevac pilot, someone who just came to drop off her friend at the airport, and the guy who came out to sell us the fuel. It's become just part of the adventure.

Posted by Aviatrix at 19:09 3 comments: Links to this post

I don't know what these things are. We see them on mountaintops. We saw one at an airport, just outside the perimeter fence, but obviously not installed. We thought it might have come down for maintenance or be waiting for transport to its mountaintop. 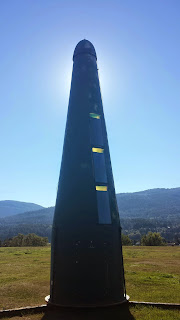 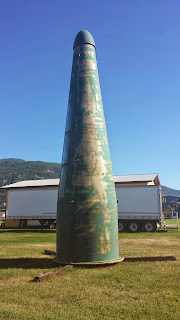 They are made of fibreglass. The transparent panes don't seem to be solar panels--I named these things solar-powered coke bottles when we only saw then from afar, and I assumed they were. The thing at the top appears to be a lightning rod, not an antenna. Are there transmitters inside? Are they radio relays? Lightning detectors? A suit of armor for a tree? Are they all over Canada or just in the mountains where we have noticed them?

I expect the full story from a solar-powered coke bottle expert who reads this blog. Don't disappoint me, Internet.

Posted by Aviatrix at 00:00 3 comments: Links to this post