It's go day. The airplane is jammed full of gear so our AME and clients are taking the airlines. It's amazing where airlines go in the US. And it's not a Twin Otter, either. They drop us off at the FBO and then drive back to the terminal to check in.

We bid farewell to the folks at the FBO. They've treated us well. The weather at destination is not great, but should be adequate for us to get in. We just have to bypass the mountains that bar our way in every direction but south. We taxi out and are cleared for take-off on the same runway we used for departure on the mission, but I think it was an intersection departure this time. We follow their instructions to fly south, then by vectors, then on course. I keep my eyes peeled for beluga whales as we go over the inlet. I so want to see a wild beluga whale.

The first route we attempt to navigate is Merrill Pass. It's a very long pass, going in over a low river and lake before reaching the saddle that is the highest point in the pass. We try to fly high, above a scattered layer, but the clouds build in front of us forcing us higher into a sandwich with the layer above. Ahead of us all is indistinct grey-white. We can't tell whether the layers meet each other or grey rock. You already know, as I said this was the "first" route, that this one was unsuccessful. Perhaps a pilot very familiar with this pass would have pressed on, but that's not us. We reverse course and tell flight services we were unable Merrill and we're going to try the lower pass at Lake Clarke. He saves us the trouble by giving us PIREPs indicating that it too is impassable. Okay, maybe we can go around further, at the end of this range. I love having fuel and speed. I'd love more going up and over, but it's a long way up to get to IFR altitudes here. This range contains Mount McKinley, locally known as Denali, the highest point in North America. That means that even with summer temperatures on the ground, the forecast ice in convective cloud is beyond the certification of this airplane.

As we work our way south down the coast the visibility drops in rain and mist. We're down over the sea, watching out for pointy islands and hoping we don't get in trouble for being within 3000' of oil rigs. Finally I say, "Screw it, we're not bush pilots. This isn't going to be safe when there isn't an ocean to the left." I take that unobstructed left turn and head back north. "Is there another airport closer that looks like it has an okay town for an overnight?" He doesn't see one on the chart and after discussion I agree with his recommendation to return to the same airport in Anchorage, where everything is. It's a better place to be stuck.

The FBO don't mind that we've come back. The manager gives us a ride to a grocery store with a deli, so we can buy lunch. We bring it back to the FBO and sit upstairs in the pilots lounge, reading National Geographic and obsessively refreshing the mountain pass webcam sites, as if we can clear the clouds by shear force of clicking. We're still hoping the weather will improve today so we can deliver ourselves and our cargo on schedule.

The manager tells us that he is going home early, but to call him if there is anything we need. We can hear the FBO staff talking downstairs. They don't know their voices drift up clearly through the architecture. They are griping about a change to the corporate policy about dogs at work. It seems someone brought a dog that barked at a customer and wrecked it for everyone. Then they start reading aloud the gory details of a CFIT accident report, with some amount of glee in their voices. I hear laughter as they get to the particulars of the broken bones in the pilots' hands and feet (this is always analyzed in fatal accidents to determine who had control at the time of the accident, and possibly how they were applying force). I don't know whether the accident happened to someone whom they hated with a passion that even death could not dim, or they genuinely think it's funny to play jigsaw with parts of a former human, or it's defensive laughter to show bravado in the face of death.

Finally the webcam shows the Merrill Pass navigable, and the stations reporting ceilings generally have higher numbers than the pass requires. We pay our landing fees and launch again. Low visibility greets us as soon as we look for the entrance to the pass. We haven't even got to the lake yet and already we are peering into gloom. "I see ground, I see ground, I see ... nothing." Mist, cloud and snow-covered rock are all the same colour. If we tried to guess which was which and guessed wrong, mine are the bones that would shatter where I am holding the control column. We turn away back to where we can see and try a different angle. We get a little further, but not far enough, not with enough visibility to be safe through the pass. Defeated, we turn back and park at PANC for the night.

The hotel we were in so far this week is booked up, so we find another. We check in and the receptionist rapidly recites a litany of forbidden activities. It sounds like "no smoking, no pets, no dancing," but the last turns out to be "no damage." You'd think that would go without saying, but a lot of things about this hotel aren't what you'd expect. For example we aren't really in this hotel. We've checked in here, but our rooms are in the scuzzy hotel across the street. The hallways smell of wood rot, and the elevator doesn't go all the way up. I unlock my room, drag my luggage in and look around. The toilet runs continuously. I know how to stop it, temporarily, but I'd like the components of my room not to require disassembly before use. 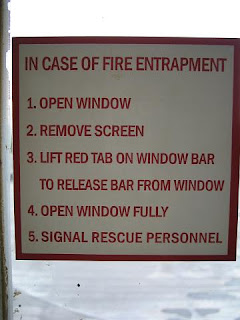 There is a sign on the window that looks a bit like our airplane emergency exit placard, so I go over to read it. The instructions are very similar, except that the last step is to signal for help, and not to effect an egress independently. Probably wise, as the hotel is on the third floor and there's quite a drop to the ground. But still, you want to be able to get out. There is another building fairly close and lower, but you couldn't get enough forward momentum to guarantee jumping to it. Maybe you could swing on something.

After a while my coworker comes in the still open door to ask if the internet is working for me. I have to confess I haven't tried it. "I was looking at the sign on my window and devising my escape plan. I figure I could take out my knife and cut each bedsheet into strips and tie them together, plus the curtains too. I'd move one of the bedframes over close to the window as an attachment point." I was just deciding whether five strips from each sheet would be enough, or if I should do more, when he came in. He didn't treat me as though I was completely insane, so he probably thought it was just an extension of my safety-consciousness, as opposed to a manifestation of my wandering mind.

I try my computer and it doesn't connect either. I call reception to report the difficulty. The desk clerk, who is very polite, confirms that the internet doesn't work from this particular property. We can go downstairs and across the street to the other building and sit in the lobby there to use it.

We go out for dinner at a little restaurant with red and white checkered plastic tablecloths. It has good service and quite tasty lasagna at reasonable prices. We eat up and go back to the hotel. I skip having a shower because I think I'd have to be dirtier than I am for the laws of dirtodynamics to suggest that I'd become cleaner in that shower.

To everything there is a season .. a time to weep, a time to laugh.

An thanks for the biggest laugh in weeks for the closing lines.

I skip having a shower because I think I'd have to be dirtier than I am for the laws of dirtodynamics to suggest that I'd become cleaner in that shower.

The "Alaska Saga" is excellent. (I'm just getting caught up.) I got into Houston one night so late that the only hotel I could find was a dump like you describe. I actually went across the street to Walmart and bought a sleeping bag to put on the bed so I wouldn't be in danger of touching the sheets.

I googled "Merrill Pass" and was amazed to find that many people go there to see and photograph plane wrecks...there are quite a lot.
Be careful out there, Aviatrix!

So you were there in June. Interestingly, the latest pictures on Google Earth of both Anchorage airport and the place with the teacher attacked by wolves are both dated June 11, 2010.

Which airplane is yours, I wonder?

I think clicking is more of a normal force than a "shear" one :)

Ah, but I have a touchpad, not a mouse.

South along the coast with ocean on the left. If it wasn't already apparent where you were headed, that would be a good clue.

I came for the aviation contact high; I stayed for seemingly offhand sentences like "I don't know whether the accident happened to someone whom they hated with a passion that even death could not dim...."