Next day I spend more time scrubbing the airplane belly, and crouching under the wing getting oil off the flaps. It's not so much that cleaning is unpleasant, as working above your head in a cramped position. It's too high to do lying on my back, but I have to tip my head sideways to work crouching and it gets uncomfortable quickly. Every once in a while I get called to go up to the cockpit and move some levers so the AME can check on the engine controls.

We're feeling grateful to the people in the shop for all the help they are giving us, so just before coffee break we go in search of doughnuts. The expedition almost comes to a screeching halt when we realize that there is no Tim Horton's in town. There's no Tim Horton's for over a thousand kilometres. Where do we get doughnuts? We ask and are directed to the grocery store. They don't look as good as Timmy's doughnuts, but if that's what people eat around here it will have to do. We get two dozen, because there are at least a dozen people working here, and who doesn't like seconds? They are well received.

Later we go back over to Reese's to get more supplies, but even though it's only about 100 metres away from the hangar we have to drive because the direct route would take us across the runway. Instead we have to drive the length of the runway down the on-airport road, turn left on a street, turn left again at the traffic lights, go halfway back down the length of the runway on a major street, then turn left off that street into parking for the supplier. I can't remember what we bought, random stuff that pilots don't even know exists until it breaks. I re-expressed my wish for magical airplane cleaning spray and was offered something called X-IT. What the heck. It might work. Or at minimum I can spray it on and fantasize for the seven minutes recommended dwell time that it will work, before I wipe it off and discover no difference. I'll spare you the suspense: it doesn't work. It might work better than the last stuff, or maybe it just doesn't work in a different way than the other stuff. I think the problem is that the soot has penetrated the paint. The only thing I could spray on this airplane to have it come clean is paint remover.

In between bouts of pretending that I can make the airplane presentable, we look around the shop. There's an engine test bed vehicle that's pretty interesting to me. It has an engine bolted to the front, complete with a propeller, except it's just a stubby-armed test propeller without proper blades, so it provides the right resistance but does not develop thrust. There's a crazy Frankenstein's monster of a cowling over the engine, because in order to run an engine for any length of time it has to be cowled or it won't have proper cooling. 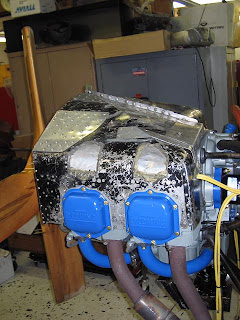 And that, as you guessed, is the answer to my "mystery panel" from the 29th. It's a generic engine panel, installed in what I think was once a forklift. They bolt on the engine that needs testing, drive it outside to the runup area and run the engine for as long as they need to, then drive it back inside and check it for leaks, or make whatever adjustments it needs. The two photos are taken on different days, so the test propeller is on in the top photo and not in the lower one. 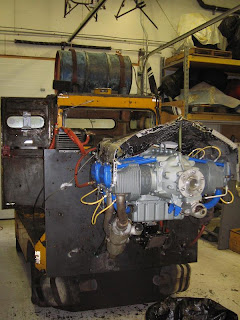 I have very much enjoyed all your answers, both the marvellous vehicles I wish I had seen and information on test stands. Please tell me more about them. I didn't get a chance to ask any questions about this one. I think I have some more photos from different angles, if there's something you want to see that doesn't show up in these shots.

Update: Earlier someone asked for more pixels. Here's the unedited shot and an equally pixelful shot of the vehicle's own control panel. 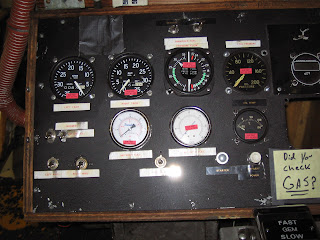 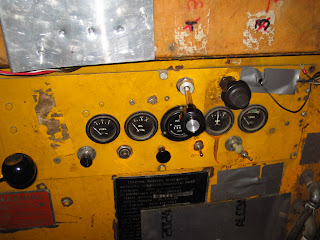 I use this to clean my Mooney's belly about every oil change, and it does really well.

Simple Green is something I will buy, and it's certainly not useless, but I think the heater soot has gone right into the paint of this airplane.

I am not a pilot, but certainly an airplane enthusiast, and I have to say that I love reading your posts, you so clearly love what you do!

My experience with persistent soot (especially on a diesel piston airplane) is that it's actually pretty straightforward to get rid of, even if it has gone through to the paint itself. What you need is something that's sold as "Marine cleaner" at least here in Northern Europe. Here's an example.

This is a slightly abrasive cleaner (very slightly, you don't really take off that many molecules of paint) but it really does remove the soot that's bonded with the paint. The two drawbacks are:

1) It's as much work as waxing the airplane (the substance is pretty similar to standard car wax)
2) You have to wax the plane afterward to make the paint stain-resistant again.

Given the surface area that a plane has, this isn't a task to undertake lightly. It is a good workout, though ;)