Having Issues. May Be A Bit.

This is so my new motto. Maybe I'll do one of these every day until I run out of famous images of historical figures having issues. 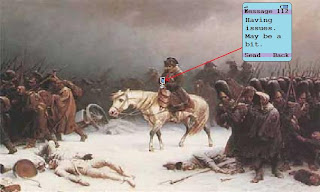 My coworker goes straight to bed after landing, not that he's especially tired after just waiting around for a while and making a short flight, but after eight hours sleep it's a new day and anything I don't get done, he can do tonight before tomorrow's icky weather arrives. I fuel and get ready for the flight, and then we're off. On the takeoff run I bring up the throttles, leading with the right lever as I have been doing, to compensate for a MP split at high power. But as I watch the power develop I adjust and discover that I don't have to do that, the left falls behind if I do that. Looks like they fixed that. They have been tweaking one thing every time it goes into maintenance, so they must have got it this time. The airplane accelerates to rotation speed and I lift the nosewheel about eight or ten degrees nose up for my initial climb. The mains come off and then there's a change in sound in the left engine and a little bit of yaw. Could be a turbocharger issue. The manufacturer specifically instructs pilots not to reject a takeoff with a failed turbocharger, so I just keep it at blue line and fly the plane. Now the left engine is surging. It's like an unsynched propeller, except that at this altitude the props are still unsynchronized. I wonder if I'm going to lose one here. Regardless, if it's putting out power, I fly a dodgy engine to a safe altitude before trying to diagnose it. The first order of business, even in a full engine failure or a fire is Control the airplane.

It flies. I reduce to climb power. The manifold pressure gauge needle isn't flicking noticeably and the tach isn't fluctuating between lights. At this angle and lighting I can't see clearly if the digital tachometer readout is fluctuating with a particular pattern. There is no gauge indication anywhere that says there is something wrong. The airplane isn't yawing crazily, it just doesn't sound right. I look at both engines out the windows. Who is to say whether the left one is surging down or the right one is surging up. The mission specialist has noticed too, which is good, because without a clear gauge indication it's easy to think you've gone insane.

I level off at cruise power and tweak things for a bit, switching fuel tanks in case I have something blocking a line, or a fuel contamination issue. No perceptible change for that or with alternate air. There's obviously something not right, so we circle back and land.

I run it up on the ground so I can report everything, but it doesn't do it on the ground, of course. I shut down and call my PRM while walking around the airplane and looking inside the cowlings from various angles to check for loose hoses, blocked intakes or any other obvious defects. The PRM asks the basic questions and says he'll get back to me. After ten minutes or so, the head of maintenance calls me. I describe the issue again, answer some more questions, and let him know I'm willing to take it up for a trouble-shooting flight, but he doesn't want me to. I joke, knowing it's not really a joke, that it probably won't do it again. He says the airplane is grounded, and he's driving up tonight to see it. I'm not sure he realizes how far north this is. I promise to get him a hotel room and tell him to call me whenever he is ready to work.

And then I have to tell everyone else that I just broke the airplane.

Back at the hotel I look at the information I have compiled on the Alaska flight. The fact that sunrise and sunset times are given as Never/Never today means that vampires must love it in the winter. Do vampires get cold? You'd think they could do quite well with a winter home in Alaska and a summer home in southern Chile. Or do vampires these days not mind the sunlight? PANC looks like one of those stupid airports. I mean this not as a slur on the airport but as a gesture of admiration for the pigheadedness of the skill and technology and rules required to make it work as an international hub, with ridiculous weather, almost total winter darkness and crazy terrain, not to mention frequent volcanic activity in the vicinity. There are mountains everywhere and no doubt horrible icing in the spring and fall given the temperatures and water all around it. Of course we're going to Alaska in what will probably be the best month of the year, because that's the kind of lucky folks we are.

Yesterday I e-mailed Dave of FL390, but he won;t be there while I am. I know (internet "know," but for many years, since before this blog) a pilot who lives in Anchorage, but when I e-mail him it turns out he'll be in Papua New Guinea until after I leave, so I won't be able to meet up with him. Of course. It is pretty much par for the course that if I finally happen to get to the remote location where someone I know lives, they will be out of town, either somewhere even more remote, or in my own town, for the duration. And if they ever come to my town I'm away. (The one glorious exception that proved that rule was that Phil (yes, he's fine, just not blogging these days) called me up out of the blue to say he was in town on the day I was having a birthday party! Perfect timing, and then after the party I drove him back to his crew hotel and instead of him getting out we steamed up my car windows for hours until security guards banged on the outside. But that's all you need to know about that).

So in this case, early to bed and waiting to see what the verdict is on the engine in the morning.

This B767 had a hard landing that damaged the fuselage but Boeing's horses and men put it back together again. Notice that the FO of the subsequent flight found the damage on the walkaround, while boarding passengers, and the comments are worth reading, describing and praising Boeing repair savvy.

Don't ya know that heated discussions of politics and/or religion will always get the windows steamed? Especially with a foreigner...

I don't like have sex in the car. It's not comfortable, and surely not agreeable for several hours.

Anonymous, get your ....er.... mind ... out of the gutter! Aviatrix didn't say the car was yawing side to side, it was the airplane.

Looking at the picture - is that Napoleon? Which would explain the hand-in-the-coat pose we usually see him in. He's obviously keeping his BB warm and/or touch/texting while he poses.

This post makes me nervous just reading it; turbo-chargers and a surging engine close to the ground.

I blew up the airliner photos. The damage and blue tape shot was kosher and also shows skin deformation between port windows five and six, (oh my) but the pixels of the repair are not kosher. Maybe the actual repaired plane wasn't available for a nice photo?

Now you've got me trying desperately to think of other illustrations for your 'having issues' meme. Capt Ahab with Moby Dick? Scott & Oates at the South Pole (having issues, may be gone some time)? General Custer?

This could be the new Lolcats...

Harold's text from the
Battle of Hastings ?

Can't find the image I'm thinking of, but the Shackleton expediton is a classic "Having Issues. May Be A Bit".

grant: Yes, that's Napoleon during the retreat from Russia.

I am liking your choices for understated historical issues-based texting. Also, the idea of Boeing having horse engineers. I imagine that they would be very earnest and hard-working, but sensitive about their inherent lack of fine motor dexterity.

The horses use their lips. You'd be surprised what they can do.