I think maybe there was giant earthquake in Alaska overnight. Before I went to bed I ran my nav program to determine that in good VFR weather with calm winds Anchorage is five hours and fifty minutes away. I left the application open when I hibernated the computer, but when I turned it on today it immediately told me Alaska is 9,358.5 miles away and my time on route would be 55h 43 minutes, including a one hour stop. For lunch, I assume. I always like to have a lunch stop in the middle of a fifty-six hour trip. I restart the application and start making phone calls.

There is no point trying to buy charts from US suppliers, because they'd never make it through customs in time for the trip. I need a supplier in Western Canada in order to get them shipped here fast enough. VIP has same-day shipping and has a beautiful graphical interface for buying US charts on its website, but only the lower forty-eight. I phone them to ask about Alaska and they say they don't carry them. Aviation World in Vancouver isn't open yet, so I call Aviation World in Toronto to find out if the store carries the charts and can do rush shipping. They say that shouldn't be a problem, and to call the Vancouver store.

It looks as though there may be some weather issues en route. The mountains in Alaska are very high and the temperature and conditions at altitude suggests icing in excess of what the aircraft systems can shed. I plan a second route around further to the north, following the Alaska highway. It's longer, but much more weather-resistant. There's low weather forecast up "the trench" and around the Alaska Highway route. No airports in the trench, and most of the Alaska highway ones are 1500' dirt strips. Alaska is like northern Canada, except with more people. I wonder if the natives in Alaska will be more like Americans or more like Canadian Inuit.

I pull up the US "Aviation Digital Data Service" weather site. I use it all the time but what I've never noticed before is that it's just the lower forty-eight. Alaska isn't on the normal weather site. This invisibility of Alaska is getting annoying.

I get a text from the pilot who is with the airplane. Instead of the expected, "taking off in ten minutes" message, it reads, "Having issues. May be a bit." I'm thinking I should add that message to my cellphone quick text menu. It covers so much, so succinctly. I'm inspired to create now: 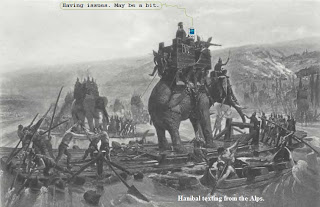 A follow up text message explains that he couldn't get into the hangar where the airplane was, then couldn't get a hold of the guy with the aircraft logbook, and finally was thwarted by bad weather. Meanwhile we have great weather here, and I have to explain before eight o' clock why we won't have an airplane at eight o' clock, while hoping that it won't be too much longer.

Back to planning my route to Alaska. We'll go via Whitehorse for sure. It's the last good place to land in Canada, to reconfirm our border crossing time and make sure all the customs paperwork has preceded us to Anchorage. Even if the weather permitted direct Anchorage from Whitehorse, the mountains east of the city are so high I'd still have to come into the area from the north or south. I plan an approach via the ominous-sounding NOEND intersection for now, just to see how the time works out. I assume that Anchorage will be very busy with FedEx and international traffic at all hours, so we'd better be ready.

Yeah about that. Aviation World in Vancouver are super friendly but don't have the Alaska charts or the A/FD for the state. They are out of the old ones, and the shipment of the new ones isn't in yet. Being in Canada, he explains, they are the last priority to get US data. They would ship the stuff to me if they had it, though. I start collecting data from the internet. I have Canadian charts as far as Whitehorse, and FAA charts and information are online available. I gather up what I hope matches my needs and put it on a USB stick for the hotel to print for me.

I also try to line up a place to park at Anchorage. I'm reading between the lines while looking online for FBOs at Anchorage and it looks as if everyone is catering to jets. I need avgas, twenty-four hour access to my aircraft, and a place to park. At an airport like Anchorage I will need that associated with a business. There won't be a piece of pavement that is just spare for transient aircraft to hang out. Someone will have to pay rent on my bit of pavement, and someone will have to take responsibility for admitting me in and out of the FAA airport facility. A pilot lounge would be nice, but we don't need passenger handling services, as everyone on board is legally crew and doesn't need to be security cleared for our aircraft or carried around in a golf cart. I call and ask an FBO that is listed as having avgas if they can accommodate us. "Yes, yes, we can do that. That will be fine," he assures me. "When are you arriving?" I can't say that for sure, because we have to wait to be released from this job, and then there are the vagaries of weather. I give an approximate date and time and warn that nothing is confirmed. He's fine with that, so I write down the name and telephone number for when we need it.

Eventually, the airplane arrives, and I go flying, but that's a story in itself.

For weather in Alaska, try the Alaska Aviation Weather Unit. There are also a lot of webcams available from a link on that site.

For parking, etc., have you looked at any of the FBO's at Merrill Field (PAMR/MRI)in Anchorage?

I'm well, well behind in blogging, so most of the mysteries of Alaska raised in this blog entry have been long solved in real life. In this case did need a PANC FBO, and eventually got directions to the AAWU website, and I'll discuss all that in the course of the story.

BTW, with so much trouble getting up-to-date charts, why don't you folks get an electronic subscription from jeppesen? JeppView for all of north america runs something like $2000/yr, updated on the net. Paper enroute charts included, but only rarely updated. Charts, maps, NOTAMS etc. all updated online & printable. Just sayin'.

It was still there the last time I drove. But that was in February 2004. I look forward to the details of your trip to/via PANC.

Two thousand dollars is way over what we budget for charts, and a chart-capable printer is over our weight and space limit for annoying stuff to haul around. We've tried having a chart subscription, but there's nowhere to mail the charts to. They just get lost.

Love that pic of Hannibal texting while crossing the Alps -- looking forward to more Alaskan stories. Have it on my list to help out with the Cambodia thing -- will do this weekend.

conditions at altitude suggests icing in excess of what the aircraft systems can shed..
please elaborate.
All I have ever had was well waxed wings, props and tremendous fear.

Unfortunately, you needed AK charts from a CA vendor right after a rotation cycle (7/29). That appears to be asking A Lot.

The system appears to assume that working pilots will simply have a Jepp subscription (And that everyone in aviation is automatically wealthy somehow).

Wish there was a better way...

Any one based on an iPad?

Awesome food in the oldest, most eclectic building in town. It was the first place I tried Caribou stew. Just thinking about the Klondike makes me want to hop in the plane and go to YXY...

As 'trix pointed out, the logistics of carrying a printer pose a real problem. I don't know what she's flying, but I do know that the cost-conscious machines I fly have absolutely no extra room for a printer.

What I'd really like to do is to web-order a set of charts/plates for a specific region and date, and have it forwarded to the nearest office-retail-chain-store of your choice for printing, wherever it may be.

There's probably a good business opportunity there, as long as one could keep attorneys away from it.

No printer? OK; but some others may find hotel printers or tiny portable ink-jet ones feasible. I mean, if that's the only obstacle, it's probably not a huge one.

When do they open in the spring? Love to try it sometime. I may be passing through again next spring, but not sure when.

I'd love to kill a couple of days in Whitehorse sometime, cool place...

If my memory is correct it is open mid May to mid September. I've never been in the 'Horse before June, so I don't know personally.

It gets some strange reviews (either love or hate) but it has always been excellent when I was there. The fish and chips are the best I've ever had. Each piece was practically a whole fish! Caribou, Bison and all sorts of local fare are available too.

Oh and the proper name is 'Klondike Rib and Salmon BBQ'... I had to look at my t-shirt at home to be sure lol.