After spending all day overflying it, we're going back to the airport today, this time to see the local air museum. We follow the signs off the main road to the terminal, then somehow miss the museum and end up driving all the way around Lake Hood. Lake Hood is the seaplane/skiplane base visible in the aerial view of a couple of days ago, the largest float plane base in the world, and probably by a long shot. It's an irregularly shaped lake, actually two lakes joined together by a dredged take off and landing channel and a slow taxi channel. There are over four hundred little docks and beaching areas densely packed all the way around the perimeter. The first thing I thought when I saw the place was, "Wow, I bet someone has to die childless before you can get a tiedown berth here." I checked and the waiting list for a spot is currently ten years; it's not clear whether you're allowed to will your family spot to your kids along with the airplane.

After we drive all the way around the lake we find where we should have turned to get to the museum. We have to cross an active taxiway to get there, with big signs warning us to go straight through and not to turn. Okay, Alaska is starting to look a little northern now. How many southern international airports trust people not to hang a left onto taxiway K? I'm impressed that they have managed to integrate the local traffic with the airline traffic so well. I only heard a couple of float planes on the tower frequency during our mission, but that, as I learn later, is because there is a dedicated frequency and tower position for the Lake Hood operations.

The Alaska Aviation Heritage Museum is in and around a series of old hangars near the shore of Lake Hood. I know it's going to be interesting because the history of Alaskan aviation isn't just about some old airplanes. It's the political and economic history of the whole state. The strength of the museum turns out to be their collection and restoration, not really presentation. I loved the whole room full of skis above, but it could have told the story of the development of the aircraft ski, or the compromises that have to be made in deciding which kind to use. They're not in chronological order or anything. The museum has so much actual metal to display that there has been less effort than I expected telling the story that connects them all. Some of the best parts are materials developed by Alaska Airlines to commemorate their 75th anniversary. Like most major airlines, Alaska Airlines is the culmination of decades of mergers between the pioneers who first brought airplanes to the area and established air service on little connecting and competing routes, so when Alaska Airlines tells the story of its history it has to include almost everyone who ever turned a prop up here. There's a room set up that consists mainly of hangar fronts and signs from old aviation operations. I don't know if they are real or replicas or fanciful, but it's fun, and not completely outdated compared to present-day Merrill Field. 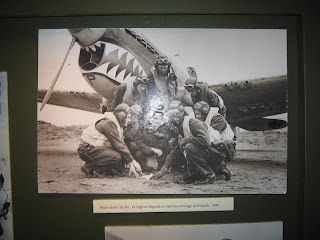 During WWII it was believed that the Japanese might attack the US from Alaska. That was the impetus to build the highway and to man air bases up here. Canadians had already been at war for a few years. I can't remember exactly what this group was doing in Alaska, but I love the pose. I have to remember to get a crew team photo all posed in front of the airplane pointing at a map like this. Leather caps and goggles wouldn't hurt, either. I really should get a set like that, shouldn't I? Anyone know where?

When we're finished at the museum we go over to the terminal to pick up a company AME. We're expecting a scheduled maintenance event to come due before we leave Alaska, and we don't want to be in a remote area without him. When I find him at the terminal, he is chatting with a couple of German tourists who are going travelling to Whitehorse from here. By bicycle. I on;y know enough German to say (and not spell) "Fahrrad?! Gott in Himmel." I love to ride my bike, but that's going to be one hell of a road. I hope they made it okay. 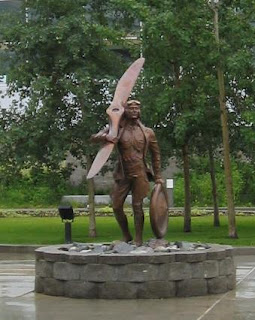 I laughed at this sculpture at the Anchorage passenger terminal. It's nicely executed and I understand the concept, but I think the average airline passenger wants to hope that there will be more than a propeller and a single wheel left of their airplane by the time they arrive. Do take a moment to dig the outfit, though. Isn't that basically a cavalry uniform? Long boots, jodhpurs, riding jacket, does he have spurs, too?

Along with all his tools and parts, our AME has brought us my precioussss rings. Cargo tie down rings. Properly loaded and with the cargo properly secured, this airplane can climb out and be safely maneuvered back to the runway on one engine. But let the load slide around and it will kill you. Plus the load itself is valuable and we don't want expensive equipment damaged in transit. These will make it possible to load all that gear and have it stay where it should be. 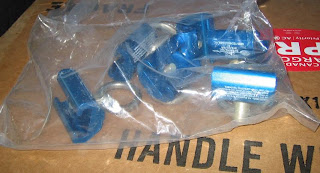 Coincidentally, as I type this up, far away from Alaska, an American news station on TV is broadcasting a local beauty pageant sponsored by Alaska Airlines. It's so local that the contestants are normal teenagers: some of them are plump and the closeup on the winner shows gaps between her imperfectly aligned teeth, and a real smile. She just picked up $6000 in scholarship money and a gold necklace with diamonds in it. Wow. I thought you just got the plastic tiara.

"Wow, I bet someone has to die childless before you can get a tiedown berth here."

When I first signed up in 1995, the person who was in the #1 spot had been number 1 for 11 years. For reasons too complicated to go into here, I dropped off the list, only to sign back up again, losing what progress I'd made.

They have changed their policies, and the list actually moves now. The spots are not inheritable.

I used to work for an attorney whose family had a mooring at Avalon Harbor on Catalina Island. It was in his dad and mom's name. When the mom died at 88, after having the mooring for over 45 years, he lost the mooring. The county had so many people in the waiting list that they didn't let him keep it.

It's like Green Bay Packers season tickets which are listed in wills, contested in divorces and highly sought after.

Tiedown points in anchorage?.....am I the only one with a warped sense of humour that finds it funny?

Steve: If I'd thought of it I would probably have used it in the post title.

Leather flying helmet & leather flying goggles . Are available on www.ebay.co.uk - shipping might be a tad expensive though .