There's a humour website where I spend too much time these days overanalyzing comic strips. The current plot in Mark Trail involves the hero being shipwrecked on an island of drug smugglers, and trying to escape in an old airplane. It kind of looks like a Cessna 170 but the wing struts go almost to the wingtip and the C170 has a semi-cantilevered wing. I was willing to accept that as an art error, but I keep reading and wondering. 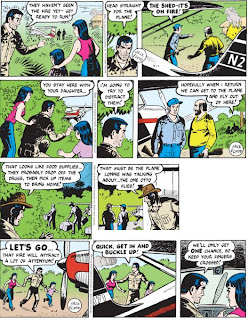 I think the artist Jack Elrod is working from photographs, because there's too much that is accurate compared to what you see when someone just makes up an airplane. He's clearly cutting and pasting older artwork, too. Notice how in the QUICK GET IN AND BUCKLE UP! panel he has forgotten to draw the foliage between the two wing struts. There are some details like what appears to be a change in the cowling paint scheme from day to day that suggest he's working from different airplanes, but comic colouring is often bizarre, so let's discount that.

Combining the QUICK GET IN AND BUCKLE UP! panel with the THE SHED--IT'S ON FIRE! one, we see that the aircraft registration begins in N2 and ends in 171. That makes it a US-registered airplane. Not counting the N, a US aircraft registration mark is not more than five characters long and only the last two may be alphabetic, which they are not. So the aircraft depicted is -- or is pretending to be -- registered as N2?171 where ? is either nothing, or a digit 0-9. That's eleven possibilities, all listed in the FAA database. Can I perhaps discover the actual airplane that has been immortalized in this very silly plot?

N2171 is assigned to an amphibious ultralight called a Searey. I've flown one, and can confirm that it's not suitable for long-range drug smuggling operations. The same registration was previously assigned to a small helicopter.
N20171 is assigned to a helicopter, and before that to a balloon.
N21171 is a 1972 C182P registered in California. Nice airplane, but newer than the one in the cartoon.
N22171 is a 1939 Aeronca 65C and that's very close to the mark. Still not a great drug smuggling airplane, but plausibilty isn't a forté of this strip.
N23171 is a 1939 model Piper J4B cub, so right era but the owner is female and women are never evil in this comic strip, so this can't be our smuggler.
N24171 is currently a helicopter, was a different helicopter before that, but in 1940 it was a brand new Akron B75L, also known as the Funk B. The cowling is wrong, but could have been modified for a different engine.
N25171 is a 1939 Luscombe 8A that the FAA says is in questionable condition, but what do they know about Drug Smuggling Island maintenance procedures?
N26171 is a Grumman Cheetah, a low wing and destroyed in 1994.
N27171 is another Piper Cub, this one a 1940 J5A.
N28171 is also a 1940 Piper Cub, a J3C-65. Different state, different owner, registered ten years apart, just happens to be a popular airplane.
N29171 was a Cessna 206, now deregistered.

I'm amused that six out of the eleven candidates were built in 1939-1940. I'm not sure how representative of overall US airplane ownership this is, but it's true that there were a lot of good airplanes built before the Americans even entered World War II, and lots of them are still flying. If we ignore the logistics and payload issue, it's plausible that Otto would be using one of these airplanes in his operation.

After I wrote the above, the later strips gave a clearer view of the airplane. It's clearer here that the registration is N2171, and we get a better look at the airplane. Also, judging by the apparent size of Mark inside the cockpit, it's doubled in size, but we'll ignore that.

So what do you think they're flying? And will they make it to safety? And how will I do on the phone interview scheduled for tomorrow for a really good company, I'd be happy to make the long move to join?

The fin and wing tips are wrong, but perhaps based on a Stinson 108, a -3 maybe?

Best of luck on your interview!

And harking back to a couple posts ago, while pilots may be commodities, remember to your faithful followers, you are a precious commodity!

Kick some tailfeathers in your interview.

I hate when I know too much about a subject (airplanes) and get distracted to the point of losing focus on the (fill in the blank) movie, book, comic etc. You know what I mean?

Kick some a$$ in the interview and pack your $hit for the move!

Good grief! I think they had this comic strip when I was a little kid and that's a looonnnng time ago. Haven't read very many comics for years. Our small town paper has a limited repertoire.

Fingers crossed for the interview...

Good luck in your interview, they will be lucky to have you :)

Nose bowl and landing gear are Stinson 108; tail is 108-3 specifically.

Good luck with the interview!

Everything from the cabin forward looks to be PA-20 Pacer to me, except that he scaled it up. 4 people in a Pacer never had that much room, unless they were afflicted with some kind of growth impediment.

I almost went for an Aeronca 15AC Sedan (which really wouldn't be a bad tool for the purported job), but that cowl looks like Lycoming-powered Piper ragwing to me. The tail is purely artistic license.

BTW, 'trix, good luck with that interview. We in the Walter Mitty wannabee pilots club are really cheerin' for ya...

I was hoping that Mark had actually stumbled onto some kind of cargo cult, and once he reached the plane he'd realise it was made of nothing more than twigs and coloured leaves.

For your interview, try my trick. I always start by telling them to piss off. That way things can only go up from there.

I'm pretty sure it's going to work some day.

170A (and B) has single wing struts vs. the twin struts of the C170. None of the 170's had the pronounced intake scoop of Otto's plane. Also all the 170 series had spring steel gear legs. These appear not to be.

Aside from lacking the Stinson's grill, the intakes are shaped and placed quite differently


Everything from the cabin forward looks to be PA-20 Pacer

Yeah, that's kinda what it reminded me of, maybe more the PA 22, which had a more pronounced scoop under the cowing, except for the minor detail that there's no nose gear. Maybe a PA-22/20 (Tri pacer converted to taildragger) But proportions are all wrong.


I'd bet long odds that the artist was referring to a photo of some type of shortwing Piper.

Well, if you're using good posture while you surf, it beats baking brownies and eating them! (;)>>>

I vote for coconut macaroons!