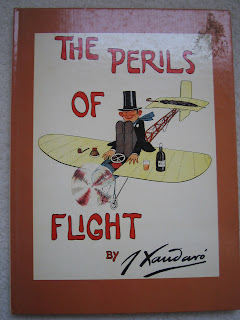 This book was originally published in France in 1911. Aviation was a daredevil sport, conducted in open cockpit single engine aircraft with negligible carrying capacity and unreliable engines. The artist Xaudaro mocked the pursuit of aviation by cartooning ludicrously implausible activities involving aircraft... 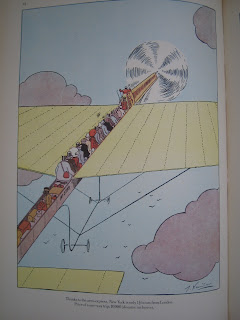 .. such as transporting sixteen passengers at once. Note the flight attendant, all the passenger baggage in the rear hold, and the baggage attendant. Both the transit time and the fare on Concorde were at least double that 'predicted' in the caption. And how many hundreds do we cram into one airplane now? 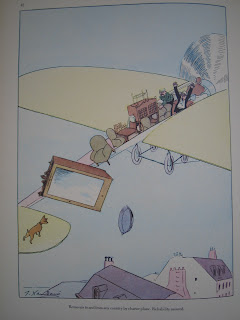 Here he has correctly demonstrated the importance of proper loading and baggage securing on a cargo flight. And I'm sure I told you that there was a dog on my first revenue cargo flight, moving house from one province to the next for a family, including a large dog. The dog rode in the passenger cabin, not on the horizontal stabilizer. 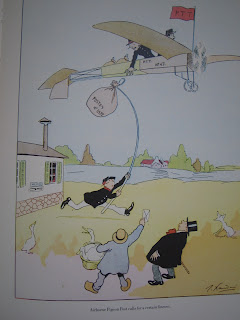 I've carried the mail, and I've picked up objects using a hook attached to my plane, but not quite this way. I love future predictions, whether or not they ever come true. I received e-mail from an editor at Popular Mechanics the other day. He was looking for the author of the information on Landing During an Earthquake. I couldn't help him, but I let him know how much I enjoy the visions of the future in his magazine. Someday I'm going to get my flying car.

The skydiving guy e-mailed back to say that he had just hired everyone he needed. I guess the combined delay of tax guy passing the information on to me and and skydiving guy getting my resume was enough for the pilots to be hired. That's how it goes. I would have liked that job, I think. Simple constraints, people having fun, an operation where I know I can operate safely, and lots of scope to excel in efficiency and customer service. It's kind of wry how quickly I imagine myself in a position. I'm mentally deciding which street I'll live on in the city of another job I've applied to and haven't heard back from. I can't help it! I predict I will get the job.

I want that cover on canvas, for my living room.

I too want that cover on my wall, but more importantly, I want to hear about the picking up of objects with a hook attached to your plane. I have an image of you flying low over the ground and dragging a long rope with a batman style grappling hook behind you, and that just seems hazardous and improbable.

Hazardous, improbable and five dollars an hour. And wicked fun. I'd do it again tomorrow.

In the early days a lot of different things were tried with airplanes, many of which were tried to prove the value of airplanes.

This is a nice post, and I would love to get ahold of this book. I am always trying to read about the early days of aviation.

JetAviator7 - Re the book - preloved tis available @ www.Amazon.com at surprisingly reasonable cost - some suppliers are US based . Unless of course a dozen other readers of this blog get there first - Hwyl Fawr