In Search of a Cornfrog

Here are a few more pictures that trigger some stories 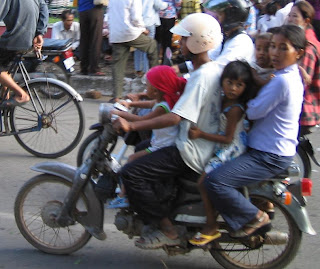 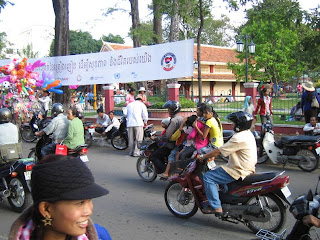 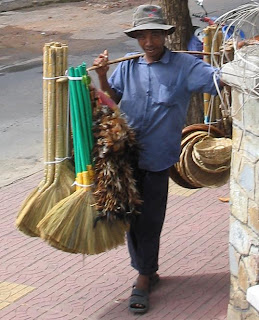 A broom and basket vendor. It makes me sad that this basic equipment is being replaced by Swiffers, leaf blowers, and plastic bags. Most people hate leaf blowers because of the noise, for me they subvert the whole leaf management exercise. Instead of gathering up the leaves and using them for compost or fuel or just putting them somewhere where they won't bother anyone, you blow them away onto everyone else's property? If next door neighbours have leaf blowers, so they blow the leaves back and forth all year until they rot or someone knuckles under and buys a mulcher? They really don't seem more efficient than rakes.

I turned down a plastic bag from a postcard vendor, as I was just going to put the cards in my knapsack. She seemed confused that I didn't want the bag, and spoke some English, so I tried some evangelism. If everyone that comes from a rich country is going to push their point of view on foreigners anyway, I might as well get my say. A simplification of the great plastic island: "I don't like plastic bags because they go in the water and birds and fish eat them and die." I don't know if she understood that, but she understands that they blow everywhere. This was in the jungle by Angkor Wat and she gestured at the trees and swamps around indicating that she knew they went everywhere and look bad. I nod. "Cambodia is beautiful. I like it that way." 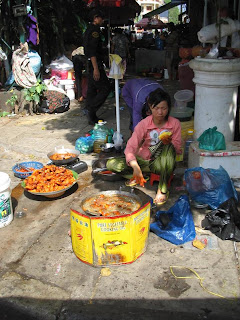 And finally here's more food. People preparing, transporting and selling food of all kinds on the street in every makeshift container. If I go back I'll spend less time looking at things and more time eating, plus I'll refuse to eat a single boring catered-for-tourists meal. 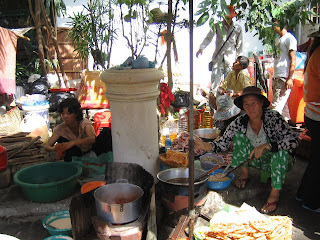 My last day in Phnom Penh I set out around eleven am to find myself a corn frog for lunch. I asked all the food vendors I could find if they had kongkep, frog? And some pointed me to others who might, and so on. In the end, I walked all the way to the Russian Market, teeming with vendors of everything and was rewarded with directions to someone who had kongkep. He was fishing battered frogs out of a deep-fryer. I was going to surrender and have one of those, but I really wasn't in the mood for deep fried food. I should have brought the cookbook, which not only has the Khmer written out, but has a picture, useful because literacy is not high among adults here. I hadn't, but I had my terrible phrasebook, and its forté is providing phrases for whiny demanding tourists. Its menu pages do not mention such delicacies as frog-kebabs, but they did give me what I needed to produce my most complex Khmer utterance of the whole trip: this deep fry frog. I no want deep fry frog. I want barbecue frog. where I can get barbecue frog? Sadly, it was not available. I was like someone on a Thursday afternoon in November suddenly deciding that she must have a corndog. Where would you go, right now to get a corndog? As far as I know, that's a food that is only available at fairs. You can probably buy McCain's Frozen Corndogs in the grocery store, but Cambodian signature dishes have not yet been reduced to processed food. (No, it's not just a potato! Read the ingredients. It's potato plus a bunch of garbage you're trying to pretend isn't in the product. I hate that ad. Non-Canadians can look serious and nod now). I had seen cornfrogs everywhere during the water festival and had not been smart enough to get mine while the getting was good. I'll add it to the reasons to return to Cambodia.

I had instead some chive cakes, so fresh I had to line up and wait for them to come off the grill. They were cooked in a metal pan with little eggcup like depressions in it to hold the batter. I had seen the equivalent pan in terra-cotta pottery, on an ox-drawn pottery vending stall, but I imagine the metal ones are easier to transport, heat and handle without breaking.

At the end of my expedition I was ready to kill the next person who offered me a tuktuk ride. I think I'll invest in a t-shirt that says no I do not need a tuktuk! You can't walk half a block without being offered a tuktuk ride or a moto ride. 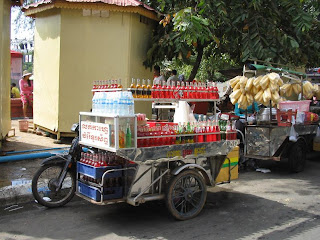 Tomorrow we fly to Hong Kong.

Crazy tourists walking everywhere! Hire wheels like anyone else with money!

(I haven't been to Asia myself, but a friend who has says a tuktuk/cycle-rickshaw/something driver yelled that after him in Thailand once after he turned down a ride...)

Cornfrog, tarantula... you certainly don't skip the interesting snacks! I've enjoyed the Cambodian posts, but comments do seem to have dried up around here.

If I wanted a corn dog right now, I would make one out of a hot dog and cornbread mix. You have the baob recipe, but I get the feeling that a major ingredient is going to be hard to come by at this time.

Maybe if I dug around under the snow ...

Thanks for the Cambodia reports. I watched the premiere of season number 2 of ice pilots. Season 1 was interesting. I was wondering if you watch this? Or have any thoughts on this. It must be challenging for you as well.I wonder if it is as cold for you.

I go out of my way to avoid watching Ice Pilots, and to avoid conversing with people who want to discuss it.

Would you care to elaborate on why??

I'll hazard a guess: Seeing on TV anything you know something about, and especially something you know a lot about, is less fun than bashing your knuckles trying to crack a stuck nut. Any intersection between TV and reality is a accidental, and often undesirable.

ok, I did not know that. I am sorry I brought it up.