This is not an account of any particular day, just a collection of images and notes on a particular type of temple carving, the apsara. 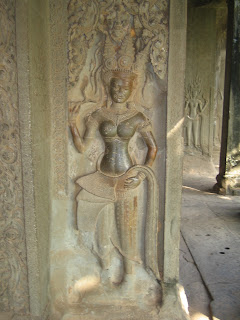 The apsara was probably the most ubiquitous image in all the temple carvings. She is a dancing woman, but not just a woman, she is half-goddess, half-woman. The guidebook calls them celestial dancers who entertain the gods and are the sensual rewards of kings and heroes who die bravely. In Hindu mythology they always performed with the celestial musicians, but in Khmer mythology they were elevated alone to special importance in temple decoration. The hand gestures represent various forms of the lotus, which in turn symbolize phases of life, seasons, etcetera. The raised hand on the one above (from the main temple at Angkor Wat) shows the blossom, and both hands on the one below (also from Angkor Wat) show the leaf. Traditional Khmer dance includes human dancers emulating these temple carvings, and they really can do the unnatural-seeming things with their hands and feet, and legs. They practice and work to enhance their flexibility from a young age 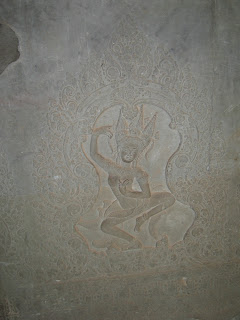 I could spend a week just going through temples here only looking at apsara carvings, learning the forms from different eras. I'm not sure now looking at the different ones, what is the choice of the individual artist, a change in fashion with the centuries, or just a different aspect of the dance being shown. I probably have a hundred photos of different apsaras (I keep wanting to make the plural "apsarae," for no good reason at all), and I haven't kept excellent records of which were on which temples or where they were on that structure, but I can work most of them out from memory or the order of photographs. 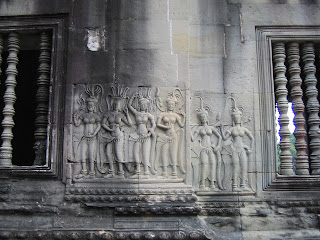 The ladies above were on the east face of Angkor Wat and the ones below were the dinner entertainment at a fancy tourist restaurant. My camera ran out of battery for the day before the dances and then at the end I managed to wring a few more photos out of it. That's why I don't have a very good shot of the dancers. 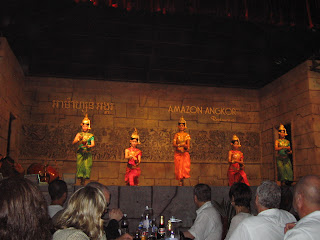 I perceive the carved apsaras as being bare-breasted, with necklaces and waist ornaments and skirts, and ancient accounts of the temple dancers describe the colour of the women's breasts, so presumably they were. I'm curious about the point when the dancers became more fully clad. They've done a good job of costumes that match the depicted dancers closely enough that I'm not absolutely certain that the originals aren't also wearing close-fitting garments. They have belly buttons but I don't have any photos where I can say for certain that they have nipples. That's not saying they never did, as they are almost all worn, from weather and handling, we'll call it worship. This lady, still an active object of worship, was in Preah Kahn. 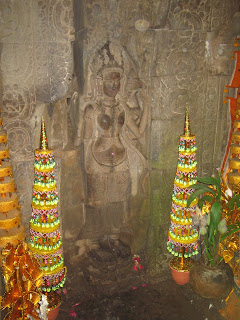 The next one is from Angkor Wat. She, thousands of her comrades also decorating that structure, and the parade of monks moving through the temples made me think: boys enter the monastary at eight or ten and stay for a few years until they leave to get married. I seriously doubt that over the last thousand years the fundamental nature of young teenaged boys has changed any more than the appearance of beautiful young women has. And here a major, if not the major decorating element of their places of worship is a mostly naked goddess. It amuses me to think of these lovely and serene ladies fuelling the fantasies of centuries of young monks who are forbidden to touch a woman, and even supposed to avoid speaking to one. 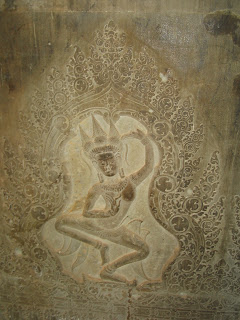 The next apsara is from Bayon near the top level. When I spotted her, there was a large tourist sitting down for a rest in the shade provided by the same walls that seem to have sheltered her from damage over the centuries. I was scoping out how to take a clear picture of her when a tour guide came around the corner, telling his charges that she was the best preserved of any apsara in Bayon, at which point the tourist realized that he was blocking a view and got up and moved. 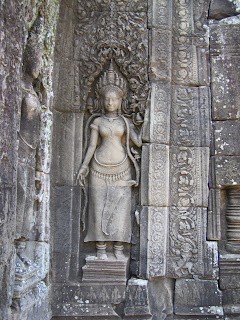 A lot of the images were badly damaged, many deliberately, probably in attempts to steal them. Some were repaired and in some cases blocks where their faces would have been had been replaced by plain stones, repairing the structural but not aesthetic damage done by the thieves or vandals. I concentrated on finding the best images. 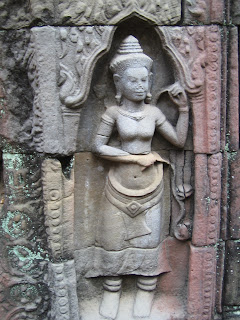 I had to climb around a little ways on the structures to capture some of the images. There were hardly any restriction anywhere on touching or climbing. I never touched the stone carvings, even though they had the oil of thousands of previous touches on them, just because I'm used to not touching precious things on display. And really shouldn't I buy them dinner first? 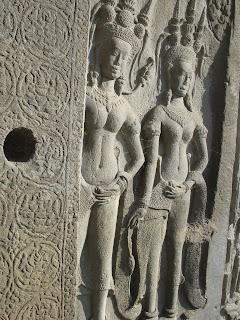 The structure below is obviously a door, and the first time I came across one I stared and thought, "Door? how can there be a thousand year old door?" Then I realized that it was stone, just a carved representation of a door and that didn't make a lot of sense either. There was noting behind it, no way it could open, so what was it for? It's an apsara door. The apsara is a celestial being so she doesn't need a real wooden door. Khmer temples, you see, unlike religious structures in Canada, are not intended as a gathering place for worshippers. There are no concerns for access, assembly, sightlines, acoustics, public galleries or pulpits. The temples are palaces for the gods and goddesses, temporary abodes, and the aim is to build a place for them so sumptuous that they will want to come and stay a while, thus making them nearby and more likely to hear or heed your prayers. The apsara can pass through this door into whatever other part of the temple, or perhaps the universe she pleases. 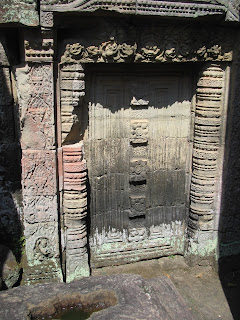 It's such an exciting idea that I can't believe Tomb Raider didn't have Lara Croft press the right combination of buttons to have the ancient apsara door open on hidden springs and hinges, instead of just inelegantly hauling down the door with ropes and manual labour.