Fastest Seaplane in the World

When I returned from Cambodia Elizabeth wanted to know what I thought of the most recent postcard she had sent me. I mumbled vaguely about being pretty ignorant about fighter planes because I think of them more as weapons of war than aircraft. (Not that I would turn down a ride or some stick time in one, but I'm not a high-G freak). Elizabeth was, I think, offended. "It's not a military airplane, it's a racing seaplane!" I had to admit that I really didn't remember that and she muttered darkly that my not recalling it told her all she needed to know about my reaction.

So I felt really badly, and even considered digging through the pile of mail on my desk to find the seaplane, but no, you gotta be kidding, my taxes and HST bill are in there. That's not something that even a sweet little seaplane was going to assuage. I'm not ready for that pile yet. So I felt ever so redeemed when a few days later I picked up my mail and there in the pile was the fastest seaplane of all time. Just not the fastest at getting through the mail from Victoria, B.C. 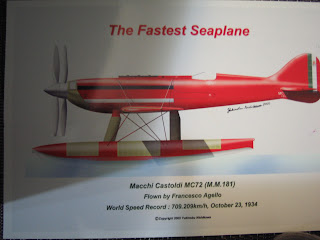 I had never even heard of racing seaplanes. Well, I knew that at the dawn of aviation runways were rare and waterways plentiful, so many aircraft, especially if they needed a long takeoff run, were built for water operation. They were slow and draggy anyway, so what difference would a couple of floats make? You say seaplane and I think of the aerodynamics of the Beaver, the old single Otter, or the Clipper. You say 1934 and I think of of the DC-3, which could go maybe 340 kilometres an hour, flat out, or stubby little conventional gear, airplanes like the Lockheed Vega, clocked at 547 km/h. But if you can read the text on the postcard you'll see that that sleek skinny red Macchi Castoldi set a world speed record in 1934, clocked at 709 km/h.

According to this website, the Great Depression kept the US out of the Schneider Cup competition, so that probably explains why a North American-centric aviation education omitted this information. The contest was established to encourage innovation in seaplane design, and seems to have stressed safety and utility at first, but the figure-eight taxi around buoys and the operation on rough water elements of the competition are overshadowed by the speed races. It took a few years to improve the engine airflow so that the speed didn't "affect the carburetion." I suspect that this refers to intake turbulence depriving the engine of a steady flow of air at high speeds.

One of the problems with trying to get high speed out of piston aircraft is that as you increase the size of the engine, you either have to increase the drag profile of the airplane, or you have a long engine with poor cooling for the rear cylinders. The Macchi Castoldi has gone the second route, with a V24 engine--twenty-four cylinders in that long, long nose--and got around the cooling problem with radiators. Lots of radiators. The yellowish strips in the picture, on the floats, the wings, and I believe also the struts are radiators. The oil cooler is wrapped around the outside of the engine, inside the cowling, and there is an additional oil cooler in the rear of the floats! This is still the fastest piston seaplane ever, and it took over twenty-five years for its record to be broken by a jet-powered seaplane.

Thank you, Elizabeth for introducing me to a chapter in aviation history that I never knew was there. Also thank you Elizabeth for providing some bonus aviation postcards to the Cambodia trip donors who requested postcards.

As you're not as interested in fighters as I was when I was a young boy, you might not know that the Spitire fighter plane was based at least partly on a previous winner of the Scheider Cup. And that's why the company that made the Spitfire was named "Supermarine", because they used to specialize in fast seaplanes.

This post lit up my day. As a child I had a scale model of this beautiful aircraft. Even as a child I could recognize how amazing it must have been to have a piston aircraft that fast at such an early date.

<a href="http://speedbirds.blogspot.com/>Speedbirds</a> is fun and Scheider-related. They do really cool graphics of real Scheider aircraft (and some related stuff like Spitfires) - and they also do science-fiction extrapolations of "future" Scheider contestants.

The interwar period is a special interest of mine - lots more than just Clippers and DC3s!

For future reference.. fastest seaplane of all time? How about supersonic?

Apparently Martin also had a rather underwhelming though 4-engined jet seaplane.. P6M SeaMaster.

G'day from Australia.
I'm a retired seaplane pilot still in love with the beasts and have just finished 2 articles on the very fast seaplanes, the Convair Sea Dart
http://www.seaplaneflight.com/fastest-seaplanes-in-the-world-part-2/

While you are there, check out the Gallery for the Red Baron biplane on floats I flew for 8 years.

This was not even close to being the "Fastest sea plane ever"! Think of the various Jets that have certainly been much faster? Convair Delta seen at the start of some TV show way back when, The Martin P-6M, certainly the fastest seaplane actually flown by a wide margin. And the Be-12, IIRC, something or other at a distant third place, not to mention all of the newer types in service now, which under the right conditions of load, condition and desperate need would certainly be faster under other conditions than those at which the Machi was clocked.
neoconshooter@live.com