Don't Let It Bug You

Breakfast includes a beautiful green curry soup with bean sprouts, banana flowers and shredded green papayas, then we jump on the bus. It's a modern coach, air conditioned with good legroom. There's a jumpseat that can fold into the aisle between each pair of seats, but we're not overloaded and everyone sits in regular seats. Except for the occasional cockroach that wanders down the windowsill.

We've chartered the bus to pick us up at our hotel, but it isn't an exclusive charter for us. It stops at the depot and some other people board. The bus station looks like a bus station anywhere, quite clean and modern. Ladies with trays of baguettes on their heads mill around outside the bus selling snacks. Once we're underway again a TV on the bus plays a Bollywood style musical romance movie, or maybe it's music videos, with Khmer subtitles

I'm sitting next to a skilled photographer with an expensive camera and she is reviewing some of the pictures she has taken, to see which she will keep. I comment that the yellow rectangle the camera viewer screen puts around the images makes them look like they are from National Geographic. "The whole country looks like National Geographic!" she responds. "You just point your camera anywhere and instant interesting picture." She gives me some photography tips. It's mostly about being in the right place at the right time and looking to see what the camera will see. The human brain is so good at filtering what the eye sees, that as a beginning photographer you can fail to notice something blocking the middle of the shot, tinted windows, undesirable backgrounds, and the like.

I could describe the whole Cambodian experience in ten photographs, none of which I managed to take. At each occasion it was too dark, too quick, too far away, an impolite thing to do at that moment, my battery was dead or there was simply no vantage point for the photograph.

We flashed passed a hundred scenes that I tried to remember or photograph or write down and then midday pulled into a little town with a café. Most people went into the café. I wasn't that hungry because I had eaten the so-so meat pastries in the lunch box they handed out on board, but I smelled something very good, a smoked fish smell and followed my nose across the street in another direction. The smoked fish were, well smoked fish, but they were dried out completely and sold in quite big bundles, so not appropriate lunch food. Then I spied something else that most people wouldn't consider appropriate lunch food, but that I knew was well into "come here, you have to see this" territory. I rushed back to the café to tell my fellow voyagers, "They're selling deep-fried tarantulas across the street!"

The same vendor has large baskets of crickets and cockroaches for sale. Someone comes up and picks out a few tarantulas while I am there and pays for them. How do you choose a good tarantula? How do you know if you got a bad one? This is an important question. My roommate and I pitch in 1000 riel (about 25 cents) each to buy one. I suspect we got ripped off big time, paying inflated tourist prices for our tarantula, but what are you going to do? After a lot of posing for photographs I got ready to eat it. The funniest photograph is the one with an intense look of concentration on my face as I hold it up to my nose to sniff it. Doesn't everyone smell unfamiliar food before tasting? It didn't smell bad, so I bit off one of the legs. There was an encouraging lack of gooey spider guts oozing out of it, so I ate the leg. It tasted like deep-fried anything.

My room mate and I shared the "drumsticks" with other brave souls and then it was time to board the buss again. I tried biting the carapace, but it was kind of hard. And it was a spider, now mostly legless, as big as my palm. I asked the bus conductor if "I eat all?" and he indicated yes, so I tried another bite. My teeth broke through the outer shell to the roasted insides of the spider. It tasted kind of like paté. I don't like paté much. I didn't finish it. I shouldn't have spoiled my appetite with the lunch box. But I can now authoritatively tell you whether any foodstuff I sample tastes better or worse than tarantula ass. 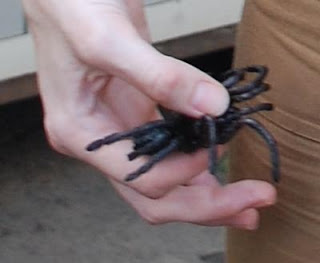 The conductor made an announcement on the bus PA, but between his accent and the speakers it was completely unintelligible. My seatmate got up and went to the front and next thing we know she's on the PA with a clear English translation of the first PA, historical and cultural details of the scenery we're passing. We finally made it all the way back to Phnom Penh.

I go out for dinner with a small group of interesting group members, at a restaurant where they train street kids to work in the hospitality industry. It's an adventurous menu of interesting food, including a tarantula-based appetizer. "Are you going to get that?" the table asked me, apparently the designated point person for weird food now.

"No," I said, knowing this may be the only time in my life I have a chance to use this line, "I had tarantula for lunch." I had stir fried ants for dinner instead. Really good, but I've had tangier ants. I like my ants tangy. 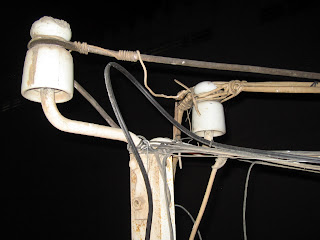 From the balcony of the restaurant I observed and documented this, which I presume was the electrical connection of the building to the grid. Electrical standards in Cambodia, if there were any, were low. Below is a fairly typical power pole with electrical transmission wires. There was another one down the street with a tree all stuck inside it, but I don't think that photo worked out. 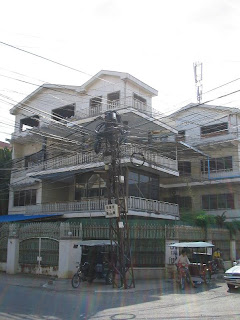 There's probably more than just power on those poles, but hey, it seems to work fine anyway. And the pole inside the huge tangle looks like it's made out of sturdy metal instead of cheap wood that decays, breaks, and then the pole falls over and the transformer that's sitting on top catches fire in the middle of your front lawn, which has been known to happen in the US on occasion.

You are much more adventurous than I will ever be food wise. A spider belongs outside or sprayed with hair spray and ignited. Sorry....I've had chocolate crickets on a dare, but never again.

And if it's not perch or walleye, I doubt if I will eat it. Then again, I love lobster, crab, and shrimp. But no ocean fish in my tummy. I'll cook it for the troops but I won't eat it.

Your trip is a wonderful story. Thanks so much for sharing it.

Welcome to the Matrix where everything tastes like fried chicken! Never ever have I thought anywhere cockroaches might be considered food ... well somewhere, but nowhere of free choice! Very interesting. Presumably, free range ... . I loved the images made available in your word pictures. What is the story behind the quilt? What does the quilt look like please? I am almost certain I would have to pass on the poop end of the spider ... pretty sure I'd have to take the "truth" over the "dare" on this one! ~D

When it comes to food, you are a much braver soul than I. You can now put a checkmark beside "Ate tarantula ass" on your bucket list.

That electric pole is identical to what I saw in Saigon - not unexpected when there is a shortage of 40 foot cedar trees in the area. Except there is nobody up on your pole with his head amongst the wires, splicing in an electrical source to run the electric motor on his air compressor for the roadside motorcycle repair shop.

Countries like Vietnam and Cambodia have such poor fundamental infrastructure, they end up leapfrogging certain levels of technology. For example, getting a landline-based telephone is a multi-year effort because there just are no unused telephone wires running up and down the streets. But you can get a cellphone this afternoon (if you have the money).

Final thought: It sounds like your trip was three-fold:
- Raise money to buy the material for the houses, not only providing housing but also aiding the local economy by providing employment, as well as enabling the purchase of materials,
- Providing some amount of the labour to build the house, therefore getting you engaged in the entire process (as opposed to just mailing off money),
- Expose you to the richness of the country, contributing to the growth of the tourism industry (a very rich source of hard currency and employment).

Like many, I have been reading and only infrequently commenting. I miss the aviation stuff, but IMHO the richness of your visit is well worth the bloggish time spent. And, assuming you're flying again, we should be getting daily flying posts for the rest of the year as you clear the aviation backlog?

Aviatrix, you are much, much more adventurous about what you eat than I. I would have trouble even picking up a tarantula, deep fried or alive. Thank goodness there is no picture of the deed itself.

The thought of eating a spider just sends shivers down my spine. And that doesn't make sense, as I'll happily dismember and eat a blue crab, and it looks like an over sized spider. You're braver than I.

But I must know: did you ever get a cornfrog? I think I'd go for that!