Different but not Wrong

Here's your Caturday post. Note that that is not just any old cat lounging on any old piece of paper, it's a twenty-four toed cat lounging on one of my op spec sheets. The standard specification for a cat includes eighteen toes: five on each front paw and four on each rear paw. But this cat is different, and has six toes on each foot. It's different, but fully operational and this cat still complies with all catly requirements, like the one to always insist on being on the opposite side of any closed door, or to lie on anything a human is using. 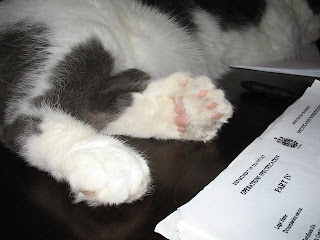 Polydactylism is quite common in cats, and doesn't seem to pose any handicap. The owner of this cat was second in line to adopt it, after a person who rejected it for the abnormality, saying that it would probably cost a lot to have the extra toes removed. I can't imagine being so wedded to normality that you would consider cosmetic surgery for a perfectly functional cat.

re: so wedded to normality

That is counter-productive in a evolutionary sense I should think... Perhaps this is the cat of the future!

You do really need to visit Ernest Hemingway's house in Key West, FL. Aside from being interesting in its connections with Papa H., it is awash in polydactylic cats.

It seems that Hemingway was fond of cats and enjoyed keeping a few around - and the mutation bred true! They are, as you say, fully qualified cats and they are clear about who owns the place.

Warm regards from a dog person,

There are two means of refuge from the miseries of life: music and cats." - Albert Schweitzer

My cat owns my oldest child. He is her person.

My dog adores me. He also has worse separation anxiety than any person I have ever met.

Yes - I'd submit that this is some sort or deluxe model super cat. It's only a matter of time before they figure out hold to hold a can opener.

Chris, once cats are no longer dependent on people to open their cans, do you think they would still tolerate us? I can't help it, I have to link to this YouTube video.

It's an interesting genetic oddity, and of unclear natural selective advantage. So, unless people breed for it, it will remain an unusual example of natural diversity. And no, cosmetic surgery to make an animal conform to a human 'ideal' is silly.

But what about this? Is this an advantage? I am glad surgery is not being considered.

I recognize that cat, or at least I think I do. West of Kenora but east of Saskatoon? Perhaps a big hangar full of cropdusting aircraft nearby? One of those old-skool Nav Canada weather briefing consoles in the lounge? Outrageously priced fuel?

If so, I was there a couple of weeks ago, taking some of our company personnel for the groundbreaking ceremony on a wind farm site.

Sarah, that kid is most excellent. I hope he gets as much enjoyment as I would out of adapting to learn to type, count on his fingers, use sign language, or simply make obscene gestures.

I would happily chip in to get him something he needs custom made, just in return for the opportunity he gives me to appreciate human diversity.