Fly In, Fall Off

There was a notice in the terminal window, next to the airside gate, about a fly-in breakfast. Today. The mission specialist (the one who helped with my jelly bean game) and I decide to attend, although we'll be driving, because our airplane isn't here. Here's the airport, so you can see the water landing area. You can see it's two or three times as wide as the paved one, which is already about six times the wingspan of the typical floatplane. 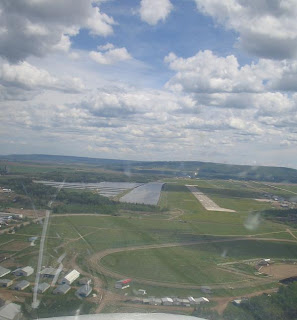 Not being members of the club, we don't know which is the right hangar, but we go to the one that has trucks parked out front early on a Sunday morning, and we are right. Inside there are tables and a few grills turning out bacon, eggs and pancakes. The hangar doors are open onto the apron, and people are really and truly flying in, and taxiing up to park outside the hangar. Most of them are "landing on the grass" type airplanes.

Pancake production is the bottleneck in the operation. There's lots of bacon and eggs. A woman is running a large grill on which she appears to be tending a single pancake. I try to offer assistance without denigrating her multi-tasking skills, and it turns out that the grill isn't working properly. This is the only hot spot on the griddle and it is barely enough to toast the pancake. I admit to her that I had suspected she was such a perfectionist that she had to focus on one pancake alone, and we laugh at that. Bacon dude is retasked to help with the pancakes, and I am honoured to be served the "single perfect pancake" from the recalcitrant grill.

Another drive-in participant has brought a newborn lamb in diapers. A ewe she was tending for a neighbour had triplets and rejected the third lamb, so she is bottle-feeding it. The diapers were just to keep the car clean on the way over. We all pat the lamb and admire its cute fuzziness while making comments about how it's too small to make a meal for everyone. It stumbles around inside a portable enclosure outside the hangar, and drinks lamb nursing formula out of a bottle.

I meet a couple there who run a catering business and he tells me the secret of the grocery store across the street from my hotel. The other grocery store in town has a good produce manager who sometimes rejects shipments if the produce is not up to his standards. When that is the case, the delivery companies take the shipment to "my" grocery store and sell them at a discount. So I know where I should be buying my groceries. I wonder if they have good jelly beans, too.

After breakfast I spent an hour or so doing paperwork, then go out to be a tourist. The town is at 'Mile 0' of the Alaska Highway, so a lot of Americans come through here every year on their Alaskan pilgrimage, and the area is set up to take advantage of that tourism business. At the tourism info kiosk I learn that Pouce Coupé rhymes with Moose Loopy. The university student working at the kiosk from there, and she thinks Pouce Coupé is actually a corruption of something in Cree, and not a commemoration of someone's injury. 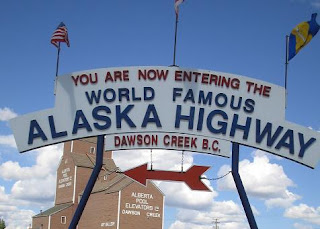 Speaking of injuries, after I'd walked around town and looked at the Alaska Highway Museum, the pioneer village and the mile zero marker I stopped to play at a playground. Dawson Creek may be in BC, but it is an honourary Yukon town, because in the same spirit where the airport manager in Watson Lake let us play in an abandoned control tower, Dawson Creek has iron playground equipment with moving parts and sharp gravel underneath. Kids who grow up here will learn that blood is red and that actions have consequences. I fell off a spinny thing that spun in an unexpected direction and landing on the gravel made a hole in my elbow. My blood is still red. It leaked for a couple of hours, then finally stopped. (It wasn't a grievous wound: I'm just not very good at making scabs). I write this up weeks later, and checking out the elbow I see that, damnit, it has left a scar. Permanent consequences. But it's not like I ever worried about the smoothness of my elbows.

Are the grass landings between the paved and wet runways, or are they further to the right (as viewed in the picture)?

In February 2004, my wife and I came down the Alaska Highway. We have the obligatory picture of that sign. We also have the Delta Junction picture to go with it.

I'm pretty sure they were landing to the right of the pavement from that direction, but some people might have landed between the two.

I've got a photo of me sitting on my motorcycle underneath that sign. Awesome!

That grain silo behind the road sign is an antique. Is it still functioning or just being kept as an artifact of an earlier era, I wonder? Very few still left whereas they used to be all over the praries and many stories are told of lost pilots who had to fly by low and slow and read the name of the town on the silo to re-orient themselves.

That particular silo has been converted into an art gallery. There is also an old train there, which is the tourism centre.

I once asked a Canadian, native English-speaking student to fly towards a particular silo. He didn't know what a silo was. Not just that he didn't know the function, but that he had no idea what object to attach the word to.

I think he knew that milk and beef come from cows.