For the first part of my flight there is very poor visibility in smoke. At Ottawa (because that's where it was, and I have no doubt you've guessed it correctly by now) the ATIS called it four miles visibility, and that's about right. It very slowly opens up. I mentally note how far ahead I can see until finally around Petawawa it opens right up and I have normal visibility. I call flight services with a PIREP to that effect, and get the latest weather from them. I'm flying towards a front that has some low ceilings and thunderstorms associated with it. When I checked the weather before take-off, I was expecting to meet the front over Lake Superior, but it's moving faster than anticipated and now it looks like I'll hit it just past Sudbury.

Sudbury lies exactly on a straight line between Ottawa and Thunder Bay. Considering how few big centres there are in Canada, and that most of them were founded before air travel, it always seems to me that a disproportionate number of them lie on a direct line between others. The highways aren't straight enough to explain the phenomenon. I imagine there is some kind of computational analysis that could be done to determine if this is true, or if it's just selection and memory bias, but it's nice how often it works, especially when the town in the middle is just right for a fuel stop.

I'm approaching the Sudbury area, and tune their FSS frequency just in time to catch part of a long PIREP about the thunderstorms. I didn't hear the type, but background noise suggests its a helicopter, and he's encountering numerous cells and poor visibility in moderate rain. I position report, get a new altimeter setting, and prepare for the onslaught.

Just past Sudbury the scattered cloud above me solidifies into a broken ceiling, and I deviate slightly to the north around an obvious cell with rain associated. As I get far enough around it to see past, there's nothing more. A bit of mist, maybe some scud, but not even enough rain to wash the giant northern Ontario bugs off my windshield. Different cruising speed and altitude, and twenty minutes time can all make a big difference to the weather experience. Or the thunderstorms have spent their thunder on Chapleau or thereabouts, with nothing left to rain on me. Once I circumnavigate the dark area I encounter clearing skies and good visibility before the lake comes into view.

So here I am again, only a week later, over the northern reaches of Lake Superior. This time I'm going about three times as fast, and I can cut the corner over the water so long as I remain within 50 miles of shore and within 60 minutes (at one engine failed speed) of a suitable emergency landing site. But there's something about northern Ontario that makes time pass slowly. I think I'll start a tradition of donating to the Terry Fox fund every time I pass this way. I think this is a long trip? Terry ran it. Why do you think he maintains his status as a Canadian hero a generation after he died? He travelled across northern Ontario when he didn't have to. Canadians respect that, regardless of how many legs a person has.

Weather across the lake past the front is fine and I'm soon descending into Thunder Bay. Back to the same FBO as last week, and the C150 is still parked there safely. I order fuel then update my weather and call company while the fuel is being pumped. The boss wants me in Regina tonight. I'm not sure that will work with my duty day: I legally started my duty day a few hours before take off from Ottawa and I'm keeping it properly in zulu time, so I know I won't go over. I initially say that I will overnight in Thunder Bay, but then decide to continue, because the weather between Thunder Bay and Winnipeg can be an obstacle--as we so recently discussed. I promise up and down that I will be there at seven a.m. tomorrow, an hour before the eight a.m. time at which the airplane is supposed to be available. This will be fine with tomorrow's duty day, too.

For my route to Manitoba, the current forecast period, the GFA shows scattered thunderstorms coming from the south. I would be able to make Regina within my current duty day, if it weren't for the headwinds. I decide to make it as far as I can legally make it and then land for the night. I plan to Winnipeg. Right after takeoff I remember one more thing that I should have done on the ground in Thunder Bay: clean the bugs of the windshield. A clean windshield is not just so I can take good photos for you, but it is important for a good lookout for traffic. And it was right around here where a well-known failure of the Big Sky principle of traffic separation occurred. It's very difficult to see an airplane on a collision course until right before it hits you, so you have to keep looking for it, all the time.

I climb into the somewhat darkened sky and level off a bit lower than I'd planned on account of a cloud ceiling. It's raining to the southwest. I slalom around a few cells, getting a few raindrops on the windscreen. I snap on the pitot heat switches. No need for windshield wipers: I'm above the placarded speed and the rain all slides off the window anyway. It's funny how instantly cold the airplane gets as you fly into rain. I guess it's partly psychological and partly evaporative cooling. It's as if I can feel the rain actually falling on me. Hey! I can feel the rain falling on me. There's a leak somewhere. I don't see it coming in anywhere, but I'm not breaking out in a cold sweat. I knew I wasn't flying a pressurized airplane, but I thought I could at least expect it to be waterproof. 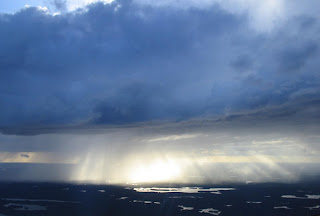 I call up flight services and file a PIREP. It's not necessary, as the weather is exactly as depicted on the GFA, but I might as well let them know they are absolutely right, and other pilots know that it isn't any worse. The briefer has access to weather radar and based on my position advises me to deviate north as far as Dryden for the next one, because it's a really big one. I do, amusing myself by taking pictures of tranquil weather out the right side of the airplane and foreboding thunderheads out of the left. 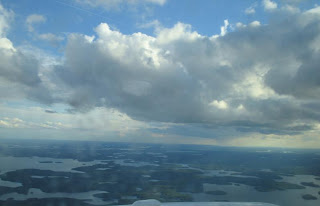 This dodging has used up some more of the time I was going to use to get to Regina tonight. The GPS predicts my arrival time at about five minutes late, and that would be ten or fifteen minutes late when I add in time for slowing down to land, then taxiing in and shutting down. I oscillate between pushing it and being legal. I could pretend I wasn't smart enough to get the winds before the flight or to use the GPS and that the fifteen minutes was due to unforeseen circumstances. But headwinds on the prairies are foreseen circumstances and who wants to draw attention to yourself and company by filing the paperwork required to make up for an duty day overrun? I could lie in the journey log or my duty record, but I don't do that. It makes me look lazy to break off for the sake of fifteen minutes, but in truth it's more work to do it this way, because it will be another airport, another landing and another takeoff. But I can do that in the morning. I land in Winnipeg.

There's some confusion at the FBO because it used to be a Shell but is now Kelly something, and there is a new Shell in a different place. They haven't quite sorted everything out with the new name and billing procedures. They sold the Shell franchise and kept the business, I think. They're very friendly and helpful and I think to myself that Canadian FBOs are finally catching up to US ones in terms of service. It's no longer "you have to buy fuel from us anyway, so shut up and deal with whatever kind of service we give you."

The hotel they recommend is not expensive and has a shuttle. When I get there I grab a reasonable approximation of supper, log on to the company website to send my daily flight report, and open the windows for tomorrow's weather.

FIRETRUCK! Tomorrow morning Regina is calling for 1/4 mile visibility in fog. Nothing I can do about it now. I make a short but heartfelt plea for the weather gods to be merciful to me, and then go right to sleep.

Oh and here's the El Al, probably on a diplomatic mission. I believe there were RCMP officers in dress uniform and Israeli and Canadian flags hoisted.

I landed in Winnipeg a couple of years ago. I used the Avitat FBO. I remember having to weave around the oil field B737 charter planes.