Welcome to My Industry

I don't know how old this box of spark plugs is, but somewhere out there someone in charge of marketing decided that the packaging with which to sell their cylindrical product featured a well-endowed woman in shorts. Who knows, maybe it works. 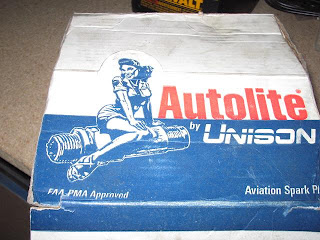 It could be worse. The young lady does have her knees together.

Oh and I wouldn't apologize either. There is no threat anywhere in that comment card. It's rambling, and it's apparently styled after a Saturday Night Live sketch, and it discusses bad things happening to an airplane, but it's clearly voiced as a nervous passenger vein, not as in "it would be a shame if anything bad happened to your nice shiny airplane, capice?" The comment is simply a ridiculously rambling version of, "OMG what if the plane crashes, I'm so scared!" The commenters on the online article all seem to think the note is threatening. Am I missing a cultural reference? If I had been a pilot and the flight attendant handed me that, I would wonder why they bothered, but in the interest of good CRM ask them to send it on to corporate, and offer the guy some reassurance in case he really was afraid of heights. Why WOULD flight attendants open a sealed customer comment card, anyway? So they can throw it away if it is critical of them?

Nothing to contribute regarding gender issues in selling sparkplugs...

Re: the commenters on the news site.

I don't know if this is true, or just my impressions, but it seems that American society, in general, has lost any ability to think rationally about "security" risk assessments of any sort, and any behaviour that strikes any individual as abnormal (often meaning not encountered in middle class, white, suburbia), clearly must be a threat, and the offender must be punished harshly.

Don't be different, don't be not white, don't travel outside of the USA, don't be poor - otherwise prepare to be treated with suspicion and maybe charged with over the top charges.

What I can't reconcile is that many individual americans I meet are reasonable, sensible people who are very friendly. But en-masse, supported by a fear-mongering media, they seem to turn into the worst kind of homogeneity enforcing mob.

The spark plugs probably aren't all that old. They still use that same image for their advertising. I have a decal somewhere. Autolite has a long tradition of ads with women. This is from 1937


Seems that Autolite is not alone in this regard

I love my spark plugs, just not in that way, you know? Oh and I have TWO per cylinder.

You aren't missing anything in the context of the note. It was stupid for a FA to open such a thing (and makes me wonder what she had done that made her want to see what comments might be made about her) and it was stupid for the guy to write it.

However, I also think the context of having an airliner with 200+ people on it tends to "amp up" responses by people in charge of those lives. It becomes much more difficult to "laugh off" or ignore such threats when they involve who you're responsbile for.

But there is literally no threat in the note. "I'm scared!" no matter how inarticulately or verbosely expressed, is not a threat. It's the opposite of a threat.

But dph has it: anything weird or abnormal is now a threat. And so are boobs.

Sadly, Autolite Annie, the notional persona behind the comely image in the adverts, passed away early in 2010. Her demise coincided with the sale of the Autolite aviation spark-plug product line to Aero Accessories, Inc. The plugs will re-emerge under the Tempest brand.

Given the realities of the modern commercial world, it's probably a good thing that Annie will no longer adorn these products. But as commercial images go she had a good run and I'll kind of miss her.

Frank (using Autolite fine-wire plugs in the bottom positions of the O-470U.)

As an US citizen, DPH's characterization strikes me, like most stereotypes, as both having a grain of truth and at the same time little foundation in reality.

I read the note. It's really kind of childish rather than funny and, no, I don't perceive a threat. I don't think it should have been responded to. I don't think he should be prosecuted for anything related to that note.

When I consider the role(s) both cabin crew and cockpit crew are expected to play these days with respect to "security" and when I also consider the very real threats that have occured on US aircraft over the past 9 years, I don't think anyone should be particularly surprised by this kind of overreaction either. Cabin and cockpit crew aren't in possession of any better judgement or control over their emotions than anyone else.

So I wonder whether men feel as patronised by the assumption that they'll only buy something if it's got cheesecake on it, as women do when confronted with some 'woman-specific' thing that's been painted pink to make us like it?

In particular, it's the bottom one, despite property and violent crime not climbing at a much greater rate than population (and even dropping), the US penal system continues to impose larger and larger penalties, with more and more call to continue to increase them to combat crime.

Also, further to Greg's post. For those that can think back and remember, the 1960s, 1970s and early 1980s were a far more dangerous time to fly, both in regards to accidents and terrorist incidents. Since then, sensible precautions that were not too onerous on the flying public increased public safety to the point that in the late 80s and early 90s. A single major attack on two airliners in 2001 has meant that since then, the security response has continued to be ratcheted up, despite the fact that since then there have been few, if any, successful attempts at any kind of deliberate attack on airlines (unsuccessful attacks would indicate that the security systems in place are working - the reason the shoe bomber tried to light the high explosive was that a proper detonator would have been caught by the metal detector / scanner. Removing shoes and looking via x-ray, for a rubber/plastic compound in the midst of another rubber/plastic compound is dumb)

The system is working, and if we let the fear mongers continue to ratchet up the pressure in the system, we start constraining perfectly acceptable, normal behaviour and imposing significant costs on proper functioning members of society. If you want to live in a police state, well, I guess I don't understand that.

And don't even get me started on the states in the US that are charging people who videotape police officers in public space with a felony charges... lock up anyone who isn't interested in good order.


No, men tend to be free of such angst.

DPH said: "A single major attack on two airliners in 2001 has meant that since then, the security response has continued to be ratcheted up . . . "

That sentence, right there, demonstrates why non-US citizens don't understand the amped up reactions to incidents on airplanes.

It wasn't just two attacks either. The United States is the only country to be targeted multiple times for attacks in the air since 2001.

While I would emphasize again the fact that I believe in the context of this original post the reactions were somewhat overdone. However, looked at in the context of the US airline world, they're also understandable *if* you take into consideration the events that drive those security concerns.

And by events, I mean all of them, not just the two aircraft you apparently recall with faulty memory.

No, the reason non-US-citizens (and quite a number of US citizens) don't understand the reaction to terrorists threats is because we can't figure out why other risks just as great, such as being killed by a home appliance don't merit a similar reaction.

And nobody talks about the signs of improvement. For example, now that auto accidents in the US have shown a significant decrease in the past few years, they are finally killing fewer US citizens every month than have been killed by all terrorism in the past fifty years. Isn't this something to celebrate?