Stuck in the Nexus

Weather the next day is not fabulous, but looks doable. We have breakfast in the hotel and when the waitress chats to us and discovers why we're here, she's thrilled to learn that we are pilots. She has always wanted to learn to fly. Hotel wireless and my iPod touch combine to produce the local flying school phone numbers and we encourage her to take a fam flight. Anyone who is going through Thunder Bay, remember to bring your swimsuit, stay at the Victoria Inn, and ask Daniella if she has gone flying yet.

We take the shuttle out to the airport and load up. The plan is to go to Fort Francis first, then Winnipeg, as Ft. Francis has been confirmed to have the oil we need. One of the wrinkles in the flight planning is the shape of the international border. West of Ontario, the Canada-US border follows the 49th parallel of latitude, as surveyed in the 19th century, but in Ontario it runs along the north shore of the Lake of the Woods. Instead of following the west shore of that lake to reach the 49th parallel on the Manitoba-Ontario border, the border drops straight down, stranding a little chunk of the US to make it accessible over land only through Manitoba. The little finger of US territory also represents a little finger of US airspace, which the Americans demand special protocols to enter. Detouring around it at our speed would cost us a lot of time and fuel, so we want to go through it. Even if we're not landing in the US, an airplane entering US airspace must squawk a discrete transponder code and be in communication with ATC. This in itself is not particularly onerous, it's just that the Americans enacted this rule without providing the infrastructure to support all its implications.

They were thinking, no doubt, of international traffic at an altitude suitable for talking to 'Center' and of a flight plan type such that they would almost always have a transponder code anyway. In Canada if there's a code required for something, there's a dedicated number you call to ask for it. I haven't passed through a sliver of US airspace like this in years. Last time it was also in the Thunder Bay area and I had to make a number of calls to get to someone who understood what I wanted and could give it to me, but perhaps it's changed now. I start by asking the Canadian FSS for the procedure. It hasn't changed. They give me an American number to call and warn me that "It's in Fort Worth, so be prepared for the accent." I give the number to the other pilot to call and the conversation starts off well because she is much better than I am at picking up on cultural cues and having a real conversation. (I talk like I'm on the radio, "This is GXYZ. Request transpoder code for passage through US airspace.") She and the US flight services guy have a nice introductory chat before addressing the matter at hand. He gives her a weather briefing for the area in question, but is baffled by her request for a code, eventually transferring her to another flight service station in Ohio. The briefer there tells her that the code has to be obtained within one hour before penetrating US airspace. You can't get it five hours in advance. We'll hit US airspace a little over an hour into our second leg, and then spend twenty minutes to half an hour passing through the angle. The briefer gives her some frequencies to try, in order to request the code while airborne. We'll see how that goes.

Now the new GFA is out and the weather is not looking as good as before. It's looking pretty brutal, actually, especially for the second leg. We don't want to get stuck in Kenora, because it's not served by an airline with an Air Canada agreement, so we can't use her flight passes to escape. She agonizes for a while , but has to call it off. We'll wait around and see if things improve.

Lots of other people are waiting with us. Thunder Bay is a nexus of Canadian aviation. Honestly there is no sort of airplane that could land here and look out of place. It's not a big city, it's just a place that has to be here, because there's such a long gap before the next place. I sent a postcard to a friend's children from here and she asked them "do you know where Thunder Bay is?"

"Of course," said the little girl. "It's where Terry Fox had to stop." Damn here am I whining about the long stretch of rocks and trees around the north of the lake, and this Canadian hero ran it on one leg and a 20th century prosthetic. Thunder Bay is almost exactly halfway across Canada. It's also on the agonal line, where the north pole lines up with magnetic north so there is no variation between compass north and true north. Because of the lakes it's often on a boundary line in weather systems, or in a little island of good or bad weather all its own. Everyone ends up here sooner or later. 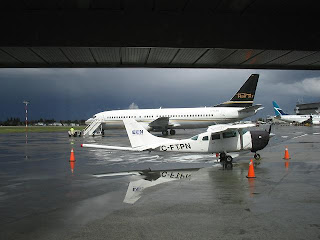 We meet a young pilot who has just spent seven months working in Resolute. That's north of Baffin Island in Nunavut. We go to lunch together and he's walking around town going, "Wow, look a Subway! I'm going to get a sandwich!" and "Look, a Canadian Tire. I'm going to go there!" It's funny the things you can miss when you're in a remote place. He just wants to walk through the aisles and have the opportunity to look at things that had been unavailable for the last seven months. A B737 lands and comes to the same FBO for fuel. They were scheduled to land in Winnipeg, but they couldn't get in because the weather was too bad. That's when my companion relaxes and realizes that she made the right decision not to attempt Winnipeg today. We'll try again tomorrow.

Interestingly - on Google Maps I measured 168nm from Ft. Frances to Winnipeg in a straight line, and 170nm by steering a couple degrees north of the NW Angle then direct YWG.

But given the time frame of your posts, this will probably be a moot point by the time you read this.

Sounds like you both made the right call to wait it out.

I look forward to reading more about your trip and about where you land in the YVR area.

Greetings from the Nexus. I've been thoroughly enjoying your posts. This latest series has been particularly cool knowing you passed through my neck of the woods. CYQT is a great airport. We see airline, commuter traffic, medevac helicopters and lots of training (Confederation College is a significant producer of commercial and military pilots - three of the current Snowbirds trained here). The MNR bases several CL-415 water bombers here. We even see frequent visits by CF-18s, C130s and during the airshow season the snowbirds pass through regularly. It truly is a nexus of Canadian aviation. Hopefully you're back again soon!
Randy
www.northernstudentpilot.ca