I wrote this blog entry in detail and then attempted to publish it on a day that Blogger had some major problem, and the text was eaten, so this is the reconstructed version.

Before we left Gore Bay, we double checked our next fuel stop. It would have to be Wawa, as the wind was too strong to make Marathon, and there isn't anywhere else a wheel plane can stop for fuel along the north shore of Lake Superior. There were no fuel NOTAMs for Wawa, but a careful reading of the CFS entry reveals that winter hours are still in effect, and the fuel service is scheduled to be closed by the time we arrive. The PIC makes a quick call to verify that fuel will be available for us tonight, and then we start up and taxi back to the runway. 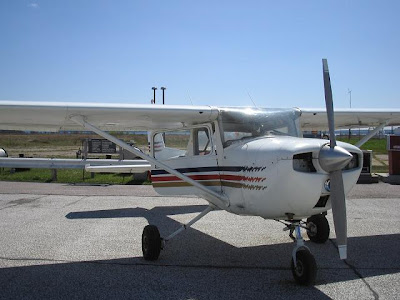 The four cylinders of the little engine directly drive the propeller and with full throttle the pistons are pounding up and down at almost 2700 rpm. We're rolling down the runway and soon airborne again. We cut northeast across the water and level out on a direct track above the wilderness towards Wawa.

My role here is mainly as companion, safety pilot and whip cracker. I'm the one who says, "You fill the tanks and I'll update the weather and file the flight plan," or "Just pee and refill your water bottle: we'll eat in the plane." She is doing the flying. We should be able to get three or four legs a day, assuming we aren't NOTAMed out of our own airport. The weather is good and turbulence is light, but it occurs to me that while I'm used to flying out the last minute of my duty day, she more normally flies for an hour or two and goes home. Plus we're literally flying cross-country and it's likely more stressful for her than me. I want to have two competent pilots in this cockpit six hours from now, so I suggest I fly this leg and she kick back and take it as easy as she can, to conserve her energy for later in the day. I know she's more of a night owl than I am, so I want to use her strengths. She agrees and I take control.

After a lot of this we approach Wawa. We have the latest winds and altimeter setting, from an autostation or perhaps from a flight service specialist, I don't remember which, and we've tuned the aerodrome frequency. There's someone in the circuit, landing on 03. This is unexpected, because the surface winds are strongly favouring 21. That's consistent with us struggling along trying to maintain seventy knots westward over the terrain. I listen again--we have lots of time before we get there--and the aircraft in the circuit reports touching down on the threshold of 03. I call them on frequency and ask if the winds are not favouring 21. They laugh and explain that they're a helicopter. The winds are definitely favouring 21. They are doing hover practice over the runway and landing westbound on the threshhold of 03. Ohhh, that makes sense. They promise to stay out of our way and I join the circuit. The trees are quite high and 21 has a displaced threshold because you can't make a normal approach over the trees to the actual end of the runway. You almost can in this plane, with 40 degrees of flaps and that headwind. I descend towards the runway and flare slightly high. I realize it, and fix the landing with power; there's lots of room to play around and get a nice soft straight touchdown.

"You never said 'you have control'!"

"You never took control. It's your plane!"

This sounds like a CRM disaster movie, but of course if I had any doubt I could safely land it, I would have given her control, and if she had any doubts she would have taken it. I probably have more time flying Cessna 150s than she has total time, but mine isn't recent time and I've watched a lot of pilots more experienced than me embarrass themselves in small airplanes that they used to know how to fly. We both laugh and taxi in. One of us parks in front of the fuel pumps. I think it was her, because I remember pointing them out. Pumps inside a locked cabinet are easily identifiable to me, but it was the first time she had seen them and didn't instantly recognize that shape as meaning fuel, or the red stripe as being the one that says 100LL as opposed to the black one for Jet-A. We shut down and go inside to find out who has stayed late to provide us with fuel. No one has, but there's a local there from another business who calls the appropriate person and says they'll be right here.

He is, and he fuels us quickly, but the $75 callout fee is more than the fuel bill. There was no avoiding it, as we had to get fuel here, and its not less trouble for someone to come out for a little plane than a big one, it's just more painful when it's a higher proportion of the fuel bill. I pay callout fees a lot at work, fuelling on weekends and early morning or late at night, but the callout fee is typically less than 5% of the fuel cost, so it never feels like an issue. She pays for her fuel and we start up and taxi back to the runway.

We're still not going to fly direct to Thunder Bay, because this is a big lake. If we cut straight across it we would be out of sight of land, and we'd still only be in the northwestern corner of the lake. We'll remain within gliding distance of the shore, or at least the shore of islands, following a big offshore arc. For the first part we're over land still because although Wawa is close to shore, it's at the eastern end of a big cape that juts out southward into the lake. It would be longer here to go over the water than to cut across the cape. Insert another forty-five minutes of trees.

Finally the expanse of Lake Superior comes into view. This is a huge, huge lake. We can see the shore beside us to the north, but we can't see the western shore and the whole south east to south west is just water. There must be people in the world who cannot conceive of this much water. I'm not sure I can. We pass offshore of Marathon, and of a floatplane base. I imagine some pilot inattentive pilot planning to fuel there and then discovering too late that there is no runway. It's close enough to Marathon they could probably make that and not have to ditch, though.

There are big islands and peninsulas down the west side of the lake, so we're flying over them as Thunder Bay comes close enough to tune the ATIS. We call the tower and follow their instructions for a downwind to the long runway. The sky is just beginning to pinken as we touch down. She follows the taxi instructions and chooses the Maintair Shell as our parking spot. We need fuel and oil. The FBO agrees to sell us both, but then are surprised to discover they are out of our grade of oil. We try the other FBO, but they don't have it either. That's unexpected. The CFS lists our grade of oil available at Kenora and Fort Francis, but it's too late in the day to call and confirm that. We'll call in the morning, and call this a day.

We leave the airplane fuelled, chocked, locked and tented and take the FBO recommendation for a hotel. It's much better than the last hotel I stayed in in YQT. This one has polite service, clean rooms, and a pool with a giant waterslide. Damn me and my superlight packing. Let this be a lesson: there is always room in your flight bag for a Speedo.

Is the goose statue still in Wawa?

Oops, looks like I messed up my posting times as a result of the eaten post, too. Oh well.

There was a paragraph in the eaten post about the goose. I know I was expecting to see it, and I have a vision in my head of exactly what it looked like from the airport, but I am not sure whether it is a true memory or not. I was going to ask you if the goose was visible from the pumps at the Wawa airport.

I just had an A-HA moment. Here in the States, there's a line of convenience stores called Wawa. I had never stopped to consider what "wawa" meant or even if it had a meaning. I just thought it was a silly name for a store. But lo and behold, after reading this blog and Amulbunny's Q about the goose, I did a little digging and found out "wawa" is Ojibway for "goose." That would explain the goose I've been seeing on its logo all these years! It all makes sense now! A-HA!

In my time there, I came up with a theory that Wawa is actually the Continental Divide of Canadian Highway road traffic. Everything flows away from Wawa, to the east or to the west. NOTHING goes through Wawa.

I vividly recall the back of a large highway sign that had been carved into by dozens ( possibly hundreds ) of similarly stranded thumb-travellers. " Wawa Eats Hitchhikers " in giant meticulously carved letters, surrounded by the inscribed initials of its victims.

5400, you may well be right. The only time I went to Wawa in a car, we drove up to the outskirts, bought gas and then drove back in the direction from which we'd come.

I suspect you stayed in the Victoria Inn? That was the place that the Esso recommended to me on my way through last summer. Either that or there are multiple hotels in YQT with waterslides.

Yes it was, douglasr. I suppose there's nothing wrong with giving the Victoria Inn a plug.