A Change is as Good as a Rest

Pretty much the minute I get home from work, I'm asked for help ferrying an airplane. (That's because I check my e-mail the minute I get home from work, but don't you?) This one isn't a job, it's a freebie for the woman who brought me to Oshkosh a couple of years ago on flight passes. She has the use of a tiny little airplane, a Cessna 150, and her employer has suddenly transferred her across the country, so she wants to move the airplane from an airport near Toronto to one near Vancouver. She has a commercial licence, but not a lot of experience, and wants a companion for the trip. As soon as I've done my laundry and repacked I'm back on the road.

The parameters of the trip are that we don't take off unless we're assured of being able to land at an airport in the Air Canada system, including Air Canada Jazz, so we can get home, and we don't fly in snow or heavy rain. She's PIC because the insurance is in her name, and she's not happy flying in those conditions. Of course the weather has to be VFR, because it's a Cessna 150 with no navigation instruments. Not even an ADF. I caution her that we might not get the weather, but as airfare is not an issue, it's worth the trip even if we only get to Thunder Bay, so we go.

Toronto is on the north shore of Lake Ontario, on a peninsula between Lakes Ontario, Erie, and Huron. If you look at a map, Huron looks like a big lake with a smaller lake riding piggyback on it; Huron is almost divided in two by the Bruce Peninsula and Manitoulin Island. Just to the west of Huron is Superior, the largest freshwater lake in the world. The Great Lakes seem even bigger when you're in a tiny airplane. The northern shores of Huron and Superior are sparsely populated, and the airplane cruises at about 90 knots and only carries about 3.5 hours of fuel, so we have to plan the trip carefully. I'm not sure yet whether we're going to take the shortcut across Manitoulin Island or if we'll go the long way around by Sudbury. I need to get more information about weather conditions on the peninsula tomorrow.

The night before the trip we're in a hotel room in Brampton, Ontario. I deliberately brought absolutely minimal gear, not even my computer, because I thought after fuel our payload might be as little as 40 pounds. I still have to have clothes suitable for surviving overnight in the bush in Northern Ontario and clothing suitable for boarding Air Canada as a non-rev passenger. People riding for free have to pay their fare by looking good for the rest of you. I go through the aircraft documents and make sure they are all present. The weight and balance calculation is a pleasant surprise: with the two of us on board and full fuel we can still carry 91 pounds of gear. Skinny girls for the win! (I'm fairly certain I got my first flight instruction job through being a skinny girl, but I'm less sure whether that was for weight and balance or aesthetic reasons). Including our headsets, survival equipment, snacks and water and personal effects, plus the gear like spare oil, towbar, and tiedowns already in the airplane, I estimate that we'll be carrying more than eighty pounds. Things like that add up quickly. The weight and balance document is dated back in the 1970s, so I kind of suspect it isn't perfectly matched to the airplane we'll be flying, but if when you change out vacuum tubes for transistors the weight tends to go down not up, so I'm comfortable. 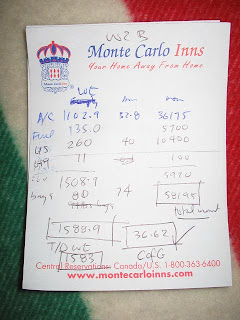 We sort out our baggage and a rough flight plan, hoping to get an early start. If all goes well we can reach Winnipeg in a day.

Here's a new blog I found recently, Airline Pilot Chatter, it's airline pilot day in the life stories, infrequently updated but worth checking now and again. It gives the same sort of details that I do. I liked the story of ferrying an airplane to the graveyard.

If you happen to be in the Winnipeg Area, drop by Southport! (CYPG) all kinds of interesting training going on there. (I also work there...)

Sweet windfall of a trip!

Sarah Conner as a flight instructor... That has a certain aesthetic value.

It sounds like an interesting trip you have lined up. I can't wait to hear the rest of it!

One question, though, and I've been wondering about this for a while. In the United States, the weight measurement unit is pounds, and in Canada, it's kilos. In your blog, I noticed you're using pounds. Does Canadian aviation use pounds instead of kilos? And what of altitude? Feet or meters?

We fly American airplanes and older Canadian airplanes with imperial units in the operating handbooks, so I have always memorized wingspans in feet and done my weight and balance in pounds. Everyone under about forty-five has taken metric in school now, but there are some imperial measurements that are culturally embedded. A 36C bra, a six foot tall man, a footlong sandwich, have kind of stuck with us. People are still more likely to know their own personal weight and height in imperial, but get longer than the height of a person and I have to use metres to get a picture of how big something is. Kilometres are well-embedded in the culture, and no one is sure what an ounce is, so we use a patchwork.

Only the Russians and the ex-Soviet nations use altimeters in metres. Our altimeters use feet, as do publications giving runway lengths and widths. Altimeter settings are in inches of mercury, but pressures in weather reports are in some magnitude of pascals.

It's all mixed up, but we deal.

Also, I'm going somewhere crazy tomorrow morning, and don't know if I will have internet access for the next couple of weeks. I have enough posts in the queue, but you might not see any comments or corrections from me for a while.

Enjoy your visit to "somewhere crazy"

The hodgepodge of aviation units in different places is a bit crazy... here in Australia, runway lenghts and widths are in meters, but all altitudes/elevations are in feet. Longer horizontal distances, of course, are in nautical miles - so you have three completly incompatible measurements of length involved.

Altimeter pressure is in kilopascals, instead of inches of mercury, so all US airplanes brought to Australia must have the altimeter subscale converted to metric... but of course the main readout is still in feet!

Speeds are typically in knots; I think old airplanes with ASIs in mph are allowed without a conversion though; I'm not quite sure about that. And in my experience weights and balances are calculated in whatever units are given in the POH - so with an older American airplane, you'd be using pounds, and inches from datum for the center of gravity. But my flight school also had some Italian-made planes where everything was metric.

Jeremy
I rather suspect that the altimeters are in hectopascals, not kilopascals...however I feel your pain.
I import a/c from Italy and the maker also exports to the US...and they think that Australia must be like the US. We used to end up with an awful hodgepodge...and none of it right. POHs would end up in US units, instruments part European and part US and the regulatory documentation in Australian units.
A lot of effort and it's now sorted...at the price of eternal vigilance.
CA

It's all mixed up, but we deal.

Have a safe trip ladies! I hope the wx co-operates with you.

I'm betting the airport near YVR is likely ZBB or YPK. Our wx has been changeable lately but shouldn't be too bad if you manage to get past the rocks (as usual)...

Only the Russians and the ex-Soviet nations use altimeters in metres. Our altimeters use feet, as do publications giving runway lengths and widths.

... and us glider pilots in continental Europe also use meters for altitude and kilometers per hour for IAS. However, all motor planes use feet and knots, which makes switching to a Touring Motor Glider somewhat confusing.

Thanks for that, Anonymous. I wondered why I'd seen UK, German, Polish and other imported gliders with metric instruments, yet heard power flying was standard imperial. Odd -- I wonder how that happened.

We sell a full range of analog and digital altimeters. Most of our altimeters include a barometric capability -- Red Oaks Trading

Sarah, Anonymous did say "continental Europe". UK (and, I would assume, Irish) gliders usually use feet vertically and knots horizontally and vertically.

I did fly a UK registered ASW19 for a year which had a metres altimeter but that was a bit unusual.