Made in Sioux Lookout

Sioux Lookout is a Northern Ontario community with an airport. The first time I ever heard of it was when I was laid off from a job--the company didn't undergo the expansion they had hired me to support--and among the wisdom I received from the compassionate captain with whom I made my last flight were the words, "At least you're not laid off and stuck in Sioux Lookout." So the Sioux was cemented in my mind as a place that merely being in could compound your troubles. I never asked that captain if his comment stemmed from personal experience.

This history and the location of Sioux Lookout led me away from thinking of the place as an innovation or manufacturing centre. And then not too long ago I found this label on a piece of equipment. 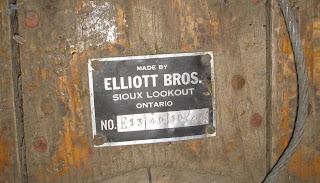 What was the piece of equipment?

In case you're wondering, the word Sioux in Sioux Lookout is pronounced the same way as the word Sault in Sault Ste. Marie or the word Soo in Soo Line Railroad. The last is the phonetic pronunciation.

Thank goodness for Google. All I will say is "Admiral Byrd knows".

Very cool. Those must be aircraft skis, manufactured in town.

The Elliott Brothers, of Sioux Lookout, Ontario designed and built replacement skis that would be utilized on northern bush planes for many years to come. The design was so good, that Admiral Byrd was to use Elliott Brothers skis on aircraft for his three expeditions into the Antarctic.

I've gotten used to calling the local Sioux "Lakota", their preferred local name. But "sioux" falls off my tongue easily too.