Do you play video games? Sometimes while I am playing video games I realize a moment too late what move I should make and then make that move anyway. So I shoot the wall, instead of the enemy, wasting ammunition. I jump after the door has closed, and slam into the wall. I turn around right after the Pac-Man ghost stops being blue. It's not slow reflexes, it's more of a "no! I meant to do this!" It's the action of a pilot who moves the gear lever to the "extend" position after landing gear up.

I'm wondering to what extent I do that in my career. There are jobs I would have killed for years ago that I shouldn't take now, but the instinct is that I still want them. What should I aim for? Do I have enough power dots left on this level to try and lure the ghosts to me, or should I just sneak around and get all the little dots to get through without dying?

A few weeks ago I realized I was sending out job applications without much of a plan, or a really clear idea of what it was reasonable for me to expect to achieve. I needed some help sorting out my career. I needed someone who knew me, who knew the various aspects of aviation in which I have participated, and who had realistic knowledge of the Canadian aviation scene. I know a number of wonderful people The name of the right person came to me one morning and when I e-mailed him, I discovered that he had moved back to my part of the country since I'd seen him last, so his home was only a couple of hours drive away. And he was happy to counsel me, declining my offer to pay for his time.

I brought my logbooks, my resumé, and a big box of kleenex, but I'm proud to say that I didn't burst into tears the whole time. He listened, he nodded, he told me my aspirations were not unreasonable for my age and experience and then as a bonus he rattled off a list of potential employers along with inside information on their hiring. It was encouraging and enjoyable, and I kind of wish I had built on that in a more stable fashion, but the next day I received the job offer that launched the most recent round of Aviatrix rides the roller coaster.

I'll go back to reading manuals at you in a few days, no doubt. Or I'll get a job and move across the country and you won't hear a thing for weeks. 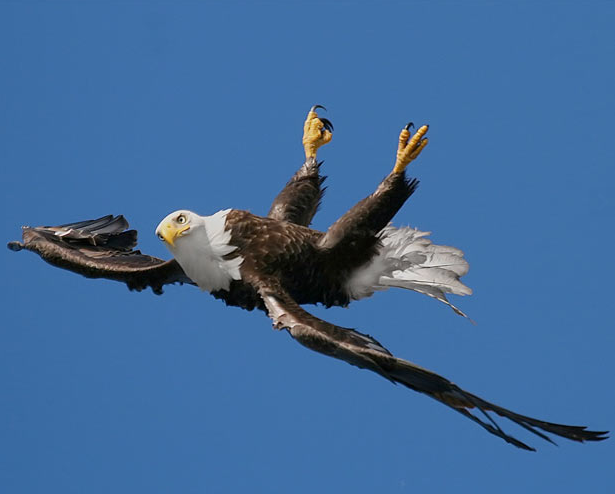 Sarah linked to the above picture yesterday in a comment and it made me laugh so hard I had to share it. What is that eagle doing? Is the image upside-down?

10 minutes of "left for dead" and I was cornered and the game was over. I haven't enjoyed video games since "Doom" in student days.

I'm glad you liked the pic. My caption: "(short final) gear down, check".

I found a direct link, which says it's a Canadian Eagle and that the image isn't upside down.

If that's in Prince Rupert, the oddest thing about the image is that the sky is blue. Seriously, Prince Rupert is the darkest, rainiest place ever. It's the reason I knew I could never get from Alaska to Bellingham in one shot VFR.

Every guy has to practice his dance moves before taking them to the club.

And your right about Prince Rupert. Back in the 70s it took the airline I was flying on two trips on consecutive days to get me and the other passengers to Masset. The first day one could have been forgive for mistaking the Grumman Mallard for a speed boat the way it was being flown. The second day had a clear blue sky like Sarah's picture.

The eagle is in the middle of an acrobatic maneuver but their heads are extremely mobile so it is keeping it's eyes on the target. It's great stuff to watch. I didn't see in the NatGeo video but I've seen examples in the Attenborough footage.

It's almost like they don't know what their body does to get them places. They just keep their eye on the prize and the reflexes and innate behavior takes care of the rest.

"Dammit, I KNOW not to follow a heavy that close!!

While flying a glider in
Florida, I had a bald eagle go past me upside down. I think he was just trying to make jealous.
This roller coaster plunge is not as bad as the the fires. You'll soon be going up- in both senses-

eagles often do this in mating flights, hooking talons and descending like a chopper in autorotation. It's also a fighting manuever. Check youtube.

Have you ever seen a video of an eagle or other raptor flying zigzags through obstacles? Their bodies twist all over, but their heads don't move at all - almost like they are gyro stabilized.

I have heard that the military is interested in this, and have designed a fighter where the cockpit stays stable, regardless of what the rest of the plane does. But I don't want to do 9G horizontal turn, thank you very much.

And Behold the chicken powered steadicam.

The eagle is perfoming a 4 point roll. His left aileron is down, so he's rolling right. He's just starting to apply some down elevator to hold his heading as he reaches air show center. C'mon, isn't it obvious?

I've seen Golden Eagles in Ontario doing the lock-talons-until-almost-hitting-the-ground thing ... but I wasn't sure that they were fighting. They actually seemed to be playing. They also flew at each other from above and behind causing the lower bird to suddenly flip upside down to present talons to talons. But again it seemed more like play...

I wonder if these were younger birds play-fighting and practicing those behaviours that are used at other times in more serious battles?

I'm wondering to what extent I do that in my career. There are jobs I would have killed for years ago that I shouldn't take now, but the instinct is that I still want them.

Damn. That's true. Fortunately I've outgrown my early aspiration to be a garbage man, but there are still a lot of decisions I've made based on career or vocational goals that, had I been thinking clearly, I would have realised I no longer really wanted. Desires can become habits.

I had no idea that eagles could do that! Enjoyed the comments about the eagle picture.

We have some eagles here in Michigan that cruise up and down the Detroit river fishing, but never saw one upside down or doing aerobatics!

Hey, keep working on getting an aviation job, once you get on with someone don't look back.

I swear there are raptors that will sit in sink just to mess with the glider pilots.