On the list of embarrassingly minor tourist gripes, the air conditioning is too cold and we can't figure out how to turn it down, and the light in the wardrobe won't turn off without turning off the master switch, which we need on in order to recharge our camera batteries overnight. We solve the former by figuring harder and the latter by unscrewing the light bulbs. We're also amused by the laundry list that allows us to specify the number of kimonos we have submitted for laundering, but "bra" is not listed. Do Cambodian women not wear bras? We hadn't noticed, which suggests that yes they do. I'll have to scrutinize my photos some more.

The hotel breakfast spread is phenomenal. It includes the staple foods for a hearty breakfast in North America, Western Europe, and many places in Asia. We can hear the delight in some Korean guests' voices as they discover kim-chee on the buffet. I bypass the omelet station, toast and jam and a spread of sliced meats, cheese and bread to try "fish porridge" (soup thickened with rice), chive cakes and bok choi fried with bacon. I also have a croissant and some dragonfruit. The last has a pink rind, with white fruit and lack dots, like something filled with poppy seeds. It was fresh-tasting, not too sweet, about like a green melon but not as juicy.

The tuk tuk drivers were all waiting and we distributed ourselves among them to head off to the temples of Angkor Wat. Our driver, a fellow I met last night while looking for supper, speaks quite good English and earned the capital to buy his tuk tuk working in a "soldier hospital." He's married and has one daughter, aged six, and she goes to school.

I should stop here and explain that Angkor Wat is literally Temple City, and was the capital of the old Khmer Empire, abandoned in the mid-fifteenth century when the rulers decamped to Phnom Penh. What remains is only the stone buildings, mostly temples, of what was once a huge city of wooden, stone and grass buildings. It is called the Eighth Wonder of the World and the main temple building is the largest religious structure anywhere. We ride out of town towards the temples, through the front gate of the national park containing the temples and buy a three day pass for $40, a fortune by Cambodian standards, but well worth it to see and help them preserve this huge complex. I later confirm that Cambodian nationals don't have to pay that fee. I want every Cambodian possible to be able to see this incredible evidence of their heritage. This isn't like the Aztec and Mayan ruins, relics of a long-gone civilization with no real connection to the people who live there now. This is pretty much the same civilization as exists now, people who are still dancing the same dances, performing the same rituals, and building with the same decorating styles. It must inspire both pride and shame to know that your ancestors did this, and that the civilization has crumbled to this extent. Imagine tourists coming to see the greatest city in your country after it had fallen into ruins and you were living elsewhere. 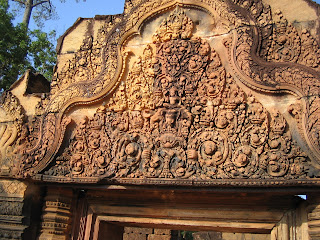 Today we are starting with Banteay Srei, "the women's temple," but the name is relatively modern. The temple doesn't have anything particular to do with women, but it's over a thousand years old and features carvings of stunning delicacy. It seems impossible that they have survived for so long. Apparently many of the temple façades were guilded and/or painted, so perhaps many layers of paint had to wear off before the elements had access to the stone. I walk through the temple and also around the outside of the moat. There are lotus flowers growing in the moat. The park staff have labelled some of the trees in Latin, Khmer and English, a nice touch for the visitor, acknowledging that the encroaching jungle and not just the temples are worthy of note. 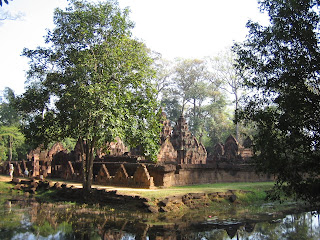 Leaving the temple I enter a merchants' area where I attract a rabble of kids reminiscent of the inchworms in Commander Keen, pause in one place for a while and you're surrounded by them, all clamouring to sell scarves, books, bracelets, and wooden carvings. A full colour guidebook to the temples catches my idea as a good idea. The merchant shows me that the cover price is $27.95 and that he will give it to me for a mere $20. I should have got something like this and studied up before I came, to appreciate it more. I leaf through the book and see that it is nice, but walk on. I don't really have time to read it now. The throng follows me through the whole market. They're polite, and my nature isn't to ignore someone who shows me a pretty thing or says hello. The price of the book gradually decreases as I walk to the end, and finally I buy it for five dollars. It's a 240 page trade paperback with high quality paper and colour photographs on every page. It's published in Thailand. I don't know how the publishing industry works anymore. Did they steal these books to make money at $5? I'm referring to it now to keep my recollections of the temples straight. 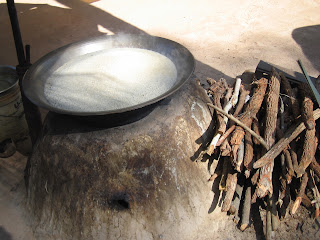 Back in our tuk tuk, we stop at a palm sugar ... um place. It's the palm tree equivalent of a maple sugar shack i.e. a cabane à sucre, where you boil the sap from a maple tree to condense it into sugar. At a cabane à sucre you pour the condensed maple syrup on the snow to freeze it and make it into candy, but here they boil the juice from the fruit down into crystals which they sell in palm-frond tubes, three for a dollar. They offer free samples, which are delicious, and I buy some for souvenirs. If you don't have maple sugar where you're from, the nearest thing to it is probably very crystalline vanilla fudge. Very sweet, a bit crunchy, and melt-in-your-mouth. We met this guy later, gathering the juice. He posed very obligingly for the photo and is the only Cambodian I ever heard complain about the heat. That's what you get for climbing trees midday! 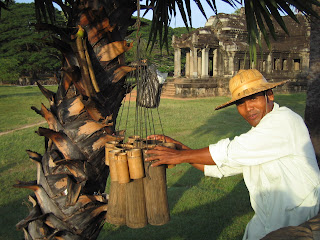 From there we went to Ta Som, a fairly isolated overgrown temple with huge piles of rubble everywhere. Even the rubble was beautiful. Each temple is built out of stone blocks, but not huge ones. I could probably just barely lift one. The carvings are not additional items placed in niches (thank goodness, otherwise they probably all would have been looted by now) but a part of each brick. I think they were carved in parts on the stones before the stones were placed here. I did pick up one of the smaller ones just to emphasize the vulnerability. Of course I put it right back, but there must be many of them stolen every year. The Indochine minister of culture even stole some entire carved apsaras (dancing goddesses, more on them later) in 1926. They caught him, but I'll bet that literally tonnes of these temple stones have left the country, some in the hands of people who truly thought they were conserving them. 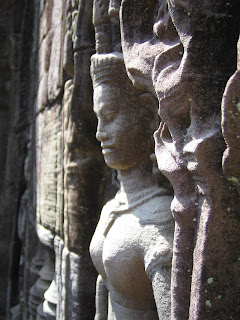 I'm going to abandon my day-by-day recitation and just let this take as long as it takes to tell, otherwise I won't be able to keep up and I'll be forced to skimp on my story.

I note that "boobs" is becoming a tag for your posts.

Beware the wingnut right, lest they do to you what they did to CBS after the Janet Jackson wardrobe malfunction.

Nah, ignore them, no sense in capitulating to the politically over-correct. Besides, what's all the fuss? On average, there is one boob per adult person on the planet.

I love your open-minded curiosity - you look at the world through the fresh eyes of a child. A marvelous thing.

Just curious, the $5 that you paid for the book - did the merchant actually want/accept US dollars? Or are you converting from the Cambodian currency - for which I see that $5 US or Canadian would be about 20,000 Khmer riel (KHR).

Jim: If anyone who is opposed to boobs reads this blog, they're quite out of their element. I am a great fan of boobs. I consider them to be aesthetically pleasing, comfortable to lie on, and a great way to provide fresh milk for infants. I think it's weird that some people are offended by boobs. I suspect they were bottle-fed children.

J: The US dollar is accepted everywhere interchangeably with the US dollar. I was advised to bring $200 in US ones for spending money, so I did. The official exchange rate was about 4200R to the US dollar, but the street rate was was 4000R to the dollar, and everything was rounded up to the nearest dollar. There were no coins used in either currency.