With the handover briefing comes the handover of the stuff. It fills a big Tupperware tub and I loathe the thing. The tub has the bloat of my suitcase, as various pilots add things that they think should be useful and never get taken out. There's a videogame joystick in there, WTF?

Usually I go to one of the outgoing pilots' rooms and pick up the tub, and at the same collect the aircraft keys and logbook. This is a good time for me to remember to give them the keys to the rental car, and yes I warned them about the vibration. "You could have exchanged it!" Yes, I know.

In the box, there is a cheap printer of the sort that costs less than a replacement ink cartridge and which I make a point of not using even if it might be useful, just to demonstrate my contempt for it. I must have used it once or twice because whenever I get home and try to print, half my applications are trying to print to it. It's a Canon iP2600. It is lightweight and it works. I just don't like having to carry it around. It probably weighs less than the package of printer paper it shares the box with.

We used to have to photocopy and fax everything, but now we have a mini-scanner with software that packs it all up into PDFs for us. It's an excellent product with good support. The box contains the mini-scanner, it its little drawstring bag, plus its cable. There's also a few packages of receipts in here and this rotation an unexpected thing. 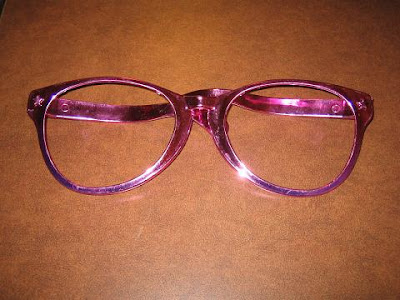 I forgot to put anything in the picture for scale, so I have to tell you that this is not a normal pair of glasses, but a giant pair of joke glasses, the kind with the frames wider than a person's face. You can see in the photo that the temples are bent, that's bent in towards the head so that they can actually go behind the ears. These were purchased for a valid operational reason, one which I understood and agreed with as soon as it was explained to me, and which I have previously blogged an intention to do. Can anyone guess their purpose?

facial interface... a device to which your attach other devices in proximity to eyes, ears, etc

Avi, I don't know what the operational reason is but take it from Auntie Critical Alpha that these are a Fashion Mistake. They won't go with the Green Hair dear and you should face up to it now. Ditch them and find something that goes better with your hair colour!!

My first guess from my experience was some kind of home-made IFR practice view restriction device. But there are much better solutions, and I don't know why you'd need to do that.

Then, I spent some time looking at pictures of Elton John. "...And all this science I don't understand
It's just my job five days a week.. " But no, again, that's more about me.

My final answer is along Critical Alpha's guess. These hold O2 nasal cannula lines out of the way. We must have a picture of Aviatrix wearing this contraption.

Eye protection when using de-icing fluid or pumping gas or using cleaning agent or the like. Bought somewhere remote where proper protective glasses were not available.

Word Verification: "Sessno"... is that a chinese rip-off copy of a US airplane?

This all has to do with new rules dealing with US airspace. We've implemented a new signalling protocol between NORDO a/c and USAF intercepts sent up to evaluate the situation. The rules state "the crew will indicate the presence of a terrorist with poor fashion sense by donning large purple joke glasses and waving arms wildly in the air".

Night vision googles..... "better to see you with my dear"! This is fun.

These are all fabulous.

The glasses are for avoiding the paparazzi due to your increasing fame. It goes with the multi-colored clown wig and glue-on moustache you didn't mention. :-D

I'm going to be prosaic and agree with ZB that they were emergency eye protection.

If you lashed a couple of mini-mag-lites to the ear bows facing forward, they'd make nice headlight brackets.