John calls at the appointed hour. We'll be in the simulator with some trainees from four to eight p.m., and my chance to fly it will be during their break, or afterward if the instructor quits early, as they often do if all goes well. It's not quite what we planned, but this opportunity couldn't be put off, anyway. Another piece of news John has for me is that the aircraft will soon be upgraded with some classified equipment and as soon as the simulator reflects that, the simulator too will be classified, definitely making it off limits to foreign bush pilots.

In the morning we go to the local aquarium. It's interesting driving there, seeing the architecture and vegetation. North Carolina is geographically and culturally halfway between Florida and New England and everything I see fits in with that. (I might have written that already, in an earlier blog entry but I'm way too lazy to check right now). There are both palm trees and colourful foliage trees here. At home the leaves are all brown or fallen, but here it's still fall colour season.

You can't go far wrong taking me to look at an exhibition of science or natural history, so of course I endorsed the aquarium idea, but it turns out to be a very good aquarium. They haven't tried to be all things to all people. They have specialized in the aquatic wildlife of North Carolina. It's not a huge state, but it stretches from the Appalachian Mountains to the Atlantic Ocean, and is not densely populated, so there are a lot of wild places and creatures to fill them. 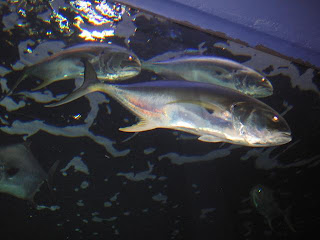 We start with the fish that live in mountain streams. There are walleyes and pike and bass and rainbow trout. The rainbow trout are a non-native, stocked species and aside from very neutrally noting that they have displaced the native species into the smaller streams, the exhibit is very neutral about their presence. Biologists are usually pretty outspoken about intruder species. Sports fishing must be an important industry around here.

There's a big tank of river otters, who couldn't be cuter if they had been given an intensive training course in cute. Two of them are snuggling on the shore while the younger one is literally ricocheting off the rock walls of its swimming area, in between racing up to the other two to check, "NOW do you want to play with me?" While we are there it is feeding time. All the otters rush off to a separate area where they are handled and inspected for any wounds or other need for medical attention and receive some food, and meanwhile a keeper enters the enclosure and hides food of different sorts all over the enclosure. Some things float, some sink to the bottom of the pools, some are hidden in holes, some placed on high ledges, and a couple of live goldfish swim around in the pool. The otters come tearing back in and climb over everything, gleefully finding the treats, including chasing down the goldfish.

You might think a "pat the stingrays" exhibit was a joke you'd tell to unsuspecting Canadian tourists, but there really was one, a flatter tank full of various types of rays, with their poisonous barbs clipped. I expected them to be sandpapery, like sharks, but they were very soft, the texture of wet velvet. The horseshoe crabs in the next tank over were also softer than I expected. I'm going to admit that I didn't think horseshoe crabs were a current species. I thought they only existed as fossils. 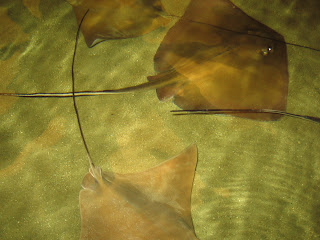 The fish in the first picture are ocean fish whose identity I failed to record. They only got their picture taken because they were slower than the sharks whose images I tried to capture. I wasn't able to tie a shot such that the camera figured out all its light settings and opened the shutter at the same moment as a shark cruised by. After that I stopped trying to photograph fish in tanks.

Okay, what else? There were turtles and frogs and snakes and alligators (not available for patting) and the aquarium was built right on the shore of an estuary, kind of half swamp half river, so after you're done looking at the fish, you can go outside and see egrets and herons eating them. We went out on the veranda and then just kept walking onto a nature trail, including over an amusingly almost-sinking boardwalk across a swamp. I forgot to look both ways for alligators before crossing it, too. Good thing I still have all my toes. 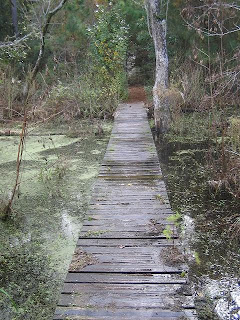 We then had a quick lunch, then off to the base for airplanes. I'll tell you about that part later.

I'm glad you enjoyed your visit to the aquarium; I've been there several times and there's always something new to see. If you were to go north from the aquarium until the road ends, you'd find yourself at Fort Macon State Park, which is a pretty interesting place. It was constructed in 1826 to defend the port of Beaufort from pirates and foreign nations. From the rooftop gun emplacements you have a great view of the ocean and harbor on three sides.

I got to put my hand into the ray tank they had at the Calgary zoo before the tragedy there that killed so many of them and shut down the exhibit. Very sad, they are amazing animals.

Horseshoe crabs are the nearest living thing to trilobites, which are sadly extinct. If anybody seriously wants to do the Jurassic Park thing they should bring back trilobites.

Horseshoe crabs rock.
They were of course my worst childhod nightmare. The area where we swam was named "Horseshoe cove" and of course was full of them. Seeing the top and bottom of dead washed up horse shoe crabs taught one to swim, and not stand around with your feet in the sandy bottom.

If anybody seriously wants to do the Jurassic Park thing they should bring back trilobites.


Except that they were extinct 50 million years prior to the beginning of the Jurassic period. I suppose that you could have a pre-quel called Cambrian Park , but the thought of rouge worms and sponges sounds more comedic than terrifying.

You just need the right spooky music and anything can be terrifying.

Ah yes... Beaufort - actually more east than north. And (for those not local) it's pronounced Bow-fort, and not to be confused with Bew-fort (which is in the other Carolina).

The airport there is named "Smith Field" and not to be confused with Smithfield (which is up in the mountains of western North Carolina). Per the sectional, the prominent town nearby is Atlantic Beach and in fact Beaufort is shown being located on the next peninsula east. No matter though, the locals call it Bow-fort on CTAF.

Better yet, seems the NIMBYs in Atlantic Beach don't like airplanes disturbing their peace. So when the the wind is 200 degrees, the "preferred" runway is 26 rather than 21.

All of this makes for an interesting approach to 21 - making calls to "Smith Field Traffic" the whole way only to be on a 1/4 mile final and have another aircraft cross in front of us doing T&Gs on 26 and making calls to "Bow-fort Traffic..."

Keep your eyes outside and call up the locals before flying into unknown airports...

Verification Word: drogquit - What happens when you drop your drag chute.

Good catch, GPS_Direct. I instinctively think that if I cross a bridge that ends at the Atlantic Ocean, and then turn left, I'd be going North. True in most cases, but not so at Atlantic Beach, NC.

Shortly before arriving, I crossed a bridge with a long name signifying that it was a Memorial and I think something about Freedom or 11th September. It was a long name and I was driving at 110 km/h in the dark. I think the bridge forked and I had to make sure I stayed on the highway 70 side of the fork.

Are we on the same bridge?

Here's the overview map of the area, and here's the fork in US 70 heading east; straight takes you to Smith Field; right takes you across a bridge to the aquarium. That's the bridge I had in mind when I talked about a bridge that went to the Atlantic Ocean. If you don't turn right, as you're approaching Smith Field you cross this bridge, but I don't know if that's the memorial bridge you noted. Farther east on US 70 there are other bridges, such as this one, but I don't think you would have traveled there.

Aha. You did say "shortly before arriving". Your bridge was the eastbound span of the "Freedom Memorial Bridge" that brings US 70 over the Trent River where that river joins the Neuse River at New Bern, NC. Here's the sign that you saw. And yes, US 70 does fork very soon after that crossing, with US 17 crossing the Neuse and US 70 continuing on for about an hour to arrive in Morehead City and Beaufort.

It turns out North Carolina has lots of memorial highways and bridges.

I don't think I saw that sign. I think I saw a longer sign, one of the overhead directional ones. Maybe "Use Right Lane for Freedom Memorial Bridge to Havelock." Or perhaps it just seems longer in the dark.

"I wasn't able to time a shot such that the camera figured out all its light settings and opened the shutter at the same moment as a shark cruised by."

Ah, yes. If you want to get shots when your camera just doesn't understand the situation, you'll need to put the camera into manual mode and use human understanding instead. You have only four basic settings to deal with (ISO, shutter speed, aperture, and focus) and you can learn the basics of setting them up properly in a couple of hours. (It's much easier than flying an airplane!)