I move forward and sit in the pilot seat to take a look. I get a kick out of the fact that I wasn't allowed to take a photo on the actual flight line, but that I can take one of the simulated flight line. There was a row of simulated KC-130s out the other window, but this picture was the only one that worked out. It's hard to get the camera to focus correctly on the projection screen. The illusion is even better than this photo shows, because I wasn't yet sitting right in the seat when I took it, so the view is a little distorted. When your eye is where it's supposed to be, you don't see the spherical distortion. 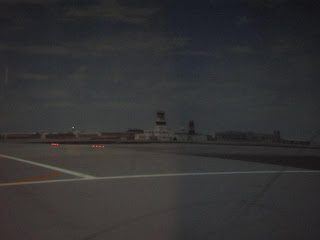 The instructor asked us not to touch anything during the break, because everything was set up exactly as he wanted it, and he didn't want it moved. Fair enough. The guys went off for their debriefing and were back before I had a chance to do anything but take a few photos, anyway. I talked to the pilots briefly. One had no flight experience prior to enlisting and did basic flight training from scratch. The other attended Embry Riddle and completed his commercial licence before he joined up. I ask if that proved to be an advantage and the answer was interesting. It was a great advantage at first on the bookwork, and it reduced the total number of training flights he had to do, which a much greater advantage than you would think, because of the way the scoring works. You start with a perfect score and you lose points for every error you make. The more flights, the more errors. He said as soon as they got past that stage the earlier training didn't count for much, but he already had the high score which got him the placement in his choice of aircraft, so it didn't matter any more.

I've trained under that system and I find it irritating as an instructor. You want to aim the difficulty of each lesson to the abilities and temperament of the individual student. Every student should make errors: that's how they learn. If a student is struggling, you make it easier for them and if they are coasting you make it harder, so they are continuously in the learning zone.

I asked them a few more questions about the airplane. They were keen, respectful interesting pilots. You might think that an Embry-Riddle grad who was also a Marine would be an insufferable prick (dickishness is an unfortunate side effect of having been consistently told you're the best of the best) but I've rarely chatted with nicer friendlier pilots anywhere. Go Marines! And come back safe.

They went back to work. The second session was more of the same, except they switched seats. I'm thinking that part of their debriefing was to do with SOPs, because checklists were noticeably crisper and they made more of the callouts I expected. They still didn't do the "take off power set ... airspeed alive ... rotate" mantra I'm used to, or if they did it was too quiet to be audible from where I sat. There were little cameras on the ceiling aimed at each pilot position, so presumably there were microphones too, such that an instructor could review the whole performance with a student.

As the crew joins a simulated downwind, suddenly the entire exterior view goes black. The visual display has shut down. From the pilot seats I hear, "oh shit" and "watch your heading bug" in quick succession. It's obviously not a checklisted emergency, but they handled it beautifully. Someone taught these guys that when all else fails, fly the plane. The visual display came back up just in time for them to turn a wide base. It happens again on final, and again they quickly make a sensible decision, "Go around." They apply power and climb back up to circuit height, continuing on in an instantaneous and unforecast solar eclipse.

"Can you fix this?" asks the instructor, and I realize he's talking to me. Urp, he must have spoken to the end of the chain that got the idea I'm a visual systems expert.

John covers for me quickly, but natural curiosity and problem-solving instincts make me play my part. I ask troubleshooting questions looking for patterns of when and where it occurs. I wish I could report having solved the mystery, but it's not related to any particular workload, period of operation or anything I can find.

The scenery comes back--the instructor may have reset it--and the guys join the pattern again for more circuits. One of their weaknesses is not only the centreline alignment on final that I noted earlier, but centre positioning on touchdown. They are landing parallel to the centreline, which is important and good, but they are not putting it right on the big white line in the middle. If they were my students I'd be saying, "Gee, I wonder what that big line is over there to the left. Does either of you have any idea?" I'm pretty sure I stole that from another flight instructor, but it's stayed with me. You hear your flight instructor's voice in your head forever, which is why it's so important to teach it right the first time. Don't ever program the words "it really doesn't matter" or "that's good enough" into your students' heads. Transport Canada knows this. A flight instructor candidate can qualify even though she is really incompetent at teaching and barely proficient at handling the airplane, but one phrase out of her mouth that could kill a student if they followed it, and it's back to flight instructor training for you.

I don't need to worry about biting my tongue on that comment though, because before I could have finished saying it anyway, the real instructor reminds them where they should be landing. And it's like this for the whole session. I wonder why, when they're consistently high on final, they aren't putting in some flap a little earlier, just before the instructor suggests the tactic. I've got my big, "I'm in an airplane!" grin on, but it's only a little bit because I'm in a cool pretend airplane and mostly because I know how to fly an airplane. It doesn't matter that it's a four engine turboprop I'm not even allowed to look at in real life, with systems I can only guess at. (For example, I'm guessing from the instructor's pre-taxi tip that it has two alternators, on engines #2 and #3). It doesn't matter how big it is. It's an airplane and I know how to fly it. I'm totally comfortable with what's going on here. I'm sure I'm missing plenty, and I'm sure these sharp young men do this a lot better than I would have with their experience, but experience counts for a lot.

John asks the instructor why they do not fly a longer final approach. That's a good way to solve problems with alignment and not being able to see you're high on base (although they have the latter pretty much licked now). The answer is a little surprising. Because that's what the Air Force does. The Marines way is a circle to final. Just because it's harder? Just because it's different? I don't know. There's definitely a Marine pride in not being the Air Force. At another point I tried to ask if there was an attempt to standardize procedure across types on their fleet. I wondered if they make the same callouts, when appropriate, on an F22 as on a C130. Maybe this explains the lack of the airline-style two-crew take-off calls. He answered a different question though, saying that no, the Air Force flies them one way and the Marines fly them another way and they don't mix crews, so it's not important. Marines fly this aircraft with a flight engineer and the Air Force doesn't.

I noticed that approaching touchdown, the instructor was calling out altitudes. I asked whether the actual aircraft was supplied with an annunciator that the simulator lacked and he said no, normally a non-pilot crew member would do that, because if you assigned the non-flying pilot to do it, he would fixate and that would be all he looked at.

The instructor announces that he's quitting at seven o' clock because he wants to go and watch NCIS. The guys come around for their last circuit and turn final, right on the centreline this time. And they are right on slope, no jockeying the power. Speed is good, gear is down, flaps are set. This is going to be a beautiful one. And it is. The sim may not duplicate the back pain of a poor landing, but it lets them know they did well. They taxi in and shut down as directed.

"I knew you were going to ace that one!" I confide as they leave for their debriefing.

"So did we! Did you hear us?" I didn't, but all the way down final they were quietly cheering each other on for what they knew was going to be a greaser. I don't remember which guy was at the controls. It doesn't matter. It was a beauty. CRM spirit achieved.

The USAF teaches high, turning approaches (also see "random steeps") to evade problems (of the shoulder launched variety) near the airfield. I'm not sure this is what's going on in your USMC sim.

Depending on how the DoD's budget is running, you may or may not get a lot of opportunities to fly, so every landing is a combat landing -- even when you have the opportunity to make a nice, long, slow, boring straight-in approach, it's not teaching the right skills.

(I'm sort of hoping you got to sit in for a real assault landing -- not sure if this is part of the KC's mission.)

re:" I've trained under that system and I find it irritating as an instructor"

It sure seems counter-productive within any learning system I'm aware of. The "don't screw up!" mentality only takes you so far...

I was recently involved with a local Air Cadet ground school. Because it was being used to weed out the candidates and qualify just one or two for potential flying scholarships, the mentality was anti-learning as well. Don't help them learn, just eliminate the slower ones.

Flight training has been a pet bug of mine for a long time. I am continually astounded at how often it is badly handled at an administrative level. Then good training comes down to good instructors working around the system rather than with it.

I hope you have time at the end of the lesson for a go at the flight controls!

No, that's definitely not what was going on in this sim. I was watching two people unfamiliar with an airplane flying a close in base and not judging the turn to final perfectly. The instructor was coaching them to the same end that I was expecting, and their approaches improved over the session until they achieved that.

An easy way to help a student fix that problem is with a longer final, but often airspace or terrain precludes this

Someone asked about flaps. It's a small lever on the console. There are, of course, no physical wing flaps on the training device, because there are no wings.

So you didn't get to fly at all?