In an account that has drifted loose from the day in which it actually occurred, I will now describe a half day free of duty in Calgary. I e-mailed everyone who responded to my Lunch invitation and whose e-mail comes up when I search on "Calgary" or "YYC," to see if anyone is up for a short notice visit. If I didn't e-mail you, and you wish I had, send me an e-mail with the name and airport identifiers that I might be putting in if I were in your neck of the woods, and you never know. I might have a free day there sometime. I search everything with the label Lunch in my gmail account, looking for the name of the town or airport, so put more than one in if you like, and avoid mentioning places you're not in the same e-mail.

No one is available for the afternoon, so I go solo to investigate the things on the hill behind the hotel. They're ski lifts and ski jumps, leftovers from the 1988 Winter Olympic Games. There's not enough snow left to ski--it's summer, after all--but there was enough to climb up a big pile of snow underneath the chairlifts and pretend I'm summitting Everest. Forgot my flag, though. I do climb up the whole hill. It's a little disorienting to find when I get to the top that the hill is really just an escarpment, and that there's a boring subdivision at the top, almost level with the top of the ski hill. 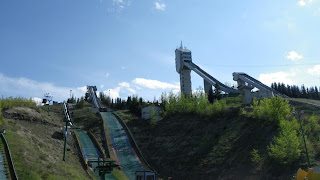 Along the ridge at the top of the ski hill there is a path that goes to the bases of a number of towers. They are the tops of ski jumps. You know when you see ski jumpingon TV and the person goes off the jump and sails through the air, bent forward over their skis into a human aerofoil? That sort of ski jump. The biggest two have elevators going to the top, but the others have stairs, and there's no gate nor "keep out" sign and it's all part of a public park. I walk on up. And up. And up. Maybe they just figured sightseeers wouldn't go up all those stairs. At the top there's a platform with that same potscrubber plastic stuff you get at the loading and unloading area of ski-lifts. There's a bar to hang onto as you position yourself at the top of the ski jump. And there's the steep, steep, precipitous drop. It's kind of freaky and at the same time flattering that the Calgary parksboard thinks highly enough of me to trust me to behave safely up here. I'm a little surprised that no one has killed themselves trying to mountain bike down the ski jump, for example. The amount more daring and less common sense than me that it would take to think that was worth trying is well within human variation. Or a mickey of Crown Royal. 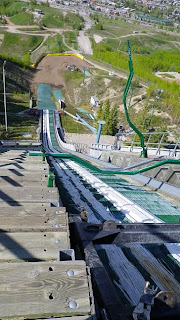 I go down the wooden stairs along the side of the ski jump and then back to the hotel. During dinner, Carlos replies to my call for locals. Remember Carlos? He guest-blogged about a high tech cement mixer he drove. I look it up and that was 2007. I guess a few very loyal readers may do. He lives in Calgary now and has time before his next shift to squire me around the city. He comes by in a low-slung car, definitely not a dump truck and we head downtown. He's rocking the aviator sunglasses and the Latin flair as he points out the Bow River trails and other sights during the drive.

We start off at the Calgary Tower. Every city has to have its phallic symbol. There's an elevator, so I don't have to walk up the stairs. At the top is a similarly dizzying view, with better safety features. There's a glass floor and we entertain ourselves "balancing" on the girders within it, and jumping into the "spaces." It's a fun game of mind over mind, to use the logical part of the brain to overrule the more instinctive part, the one that says, "there's no FLOOR there!" Then we walk all the way around the tower, looking at the landscape. We can see the Rocky Mountains, the suburbs, the airport, along with arrivals and departures, and some of the downtown. Part of the view from the tower is blocked by a tall building that wasn't there when the tower was built. Ironically, it't the same building the controller wouldn't give me permission to overfly at 7,100' a few weeks ago. Now I get a better look at it, closer to the ground. Carlos also explains his crazy scheme to learn to fly and build time as a commercial bush pilot in South America. I realize at this moment that we were so busy discussing his plans that I never got around to telling him that I might be working there this winter. Now he's going to kill me.

Back at ground level it's too late (i.e. within twelve hours of my report time) to have a drink at Carlos' favourite bar, so he vows to find me some dessert. He consults with his dispatcher from work while driving around the city. It's amusingly similar to me trying to get airport information from the FSS while in descent. It's late enough that the best bet turns out to be Dairy Queen, so Carlos pulls up to some young ladies on the sidewalk, cranks the charm up a several notches and gets directions to the nearest. Ice cream doesn't have to be fancy to be good, and this was quick and delicious to get me home in time for my required duty rest.

I remember asking Carlos if he wanted me to hold anything back in my description of the evening, and he said to go ahead and tell it like it was, so I must have been planning to mock him for something, but I've forgotten what it was. Probably his driving. I don't think I screamed at all though, so it's all good.

It's funny sometimes, that a guy doing his best to impress you might not come off as the most impressive, but it makes a girl feel good that he's going to the effort, so in the end she's happy. Carlos was tired and busy, but he postponed some important tasks to make sure I felt welcome and had a great time in Calgary. Yeah, tip for everyone: spend more effort making the person you're with feel important than making them believe that you are important. That takes me right back to some advice I received may years ago from another Albertan: "stop trying to show people how smart you are, and concentrate on letting them see how nice you are." It's a rare friend who will offer constructive criticism that requires them to point out your personality flaws. I don't know where he is now, but if you're out there, K'Harv, you know who you are.

Carlos came to Canada from Colombia and over the past few years I have had the privilege of witnessing his gradual mastery of the English language and his pride in his new country through our e-mail correspondence. He teased me with a put-on accent when I remarked on having expected one. He sounds almost like he was born here now. He's even writing eloquent letters to the CBC, and just had an excerpt from one on climate change read on-air on a province-wide show. You can listen to it via podcast (at minute 20:34), or read the unedited version at his new blog. He notes that the units for the diesel consumption mentioned in the letter read on air should be km/liter, not liters per kilometers.

I'm proud to have friends who stand up and speak out for what they believe in.

It's interesting how some sports need little "special provision" for it to happen. Then you get something like the ski jump, and I guess the bob-sleigh too, where a large, and I guess fairly expensive structure (that can't really get used for anything else afterwards) has to be built.

So, if it HAD been winter, would you have been up to try a jump? Or a quick "spin" on a bobsleigh?

OMG, just been looking at stuff about the Calgary Olympic site: you can go down one of the ski jumps on a ZIP WIRE!!!!

Who's up for THAT?