None Shall Know the Day Nor the Airport

I did an IFR flight test on an unfamiliar airplane several months ago, so I should be good at this now. I know I know my IFR details, but this is a PPC ride, where I'll be grilled on the airplane. I have been asked crazy details on PPC rides, like how many vortex generators an airplane had (88), the identity and amperage of the largest circuit breaker (hydraulic motor and I think it was 30A), and the identity of every antenna and line sticking out of ports in the belly and engines. Sometimes you have to fall back on, "I don't know! If it comes loose or leaks a lot I'll take a picture of it and e-mail it to maintenance." But I should know how this airplane works. I spend a day with its manuals and many supplements and hope I have the right things memorized. When you're working towards a PPC ride with a particular examiner, the person training you knows what the examiner is sticky about and primes you for such questions. I would not, otherwise, have been counting vortex generators. But not only do I not know who the examiner will be, I don't have anyone training me. I'm a pilot, so I'm supposed to know how to fly this thing.

And now the monitored ride with the Vancouver examiners is unlikely, because company wants me to take this airplane back to Alberta. They're going to find an examiner for me in Edmonton. Okay, I can do that. Except maybe I can't right now, because the mountain passes are choked with stratus and fog, and there is weather all around Vancouver, too. Oddly, although I need an IFR PPC on the aircraft in order to fly it around in beautiful weather at 20,000', my regular IFR rating is sufficient for me to launch into actual IFR conditions, for a ferry flight. It's only for revenue flights that I need a PPC.

So the pilot is approved and the operation is approved, but what about the airplane? It has an autopilot. I have a yoke-mountable chart holder, and a headset with a boom mike, almost archaic (as in who doesn't have these things?) requirements for single-pilot IFR. The airplane, however, does not have leading edge ice protection. It is therefore "not certified for flight into known ice."

So we look at the icing forecast, of which this is part. Red is turbulence, blue is ice. 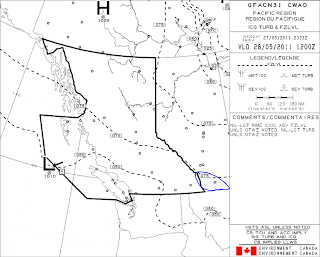 I'm headed from the bottom left of British Columbia, the province outlined in black, to the middle of Alberta, the next province to the east. That route goes nowhere near the one patch of blue on the whole forecast. So does that mean there's no ice? It doesn't. This seems so weird now that I have to explain it, but if you look at the bottom of the chart, right above the red Canadian flag, you see some bold yet cryptic notes proclaiming that CB TCU AND ACC IMPLY SIG TURB AND ICG. This translates to a reminder that cumulonimbus, towering cumulus and altocumulus castellanus clouds can be counted on to be full of the supercooled water droplets that cause airframe icing. An airplane without leading edge ice protection definitely cannot safely fly through such a cloud. To see where those clouds are, you have to consult the corresponding clouds and weather chart. 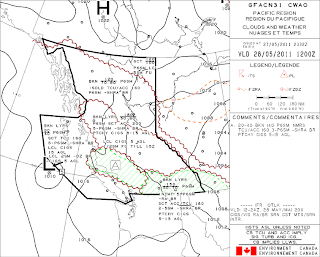 Even if you don't read weather, you can pick out ACC and TCU in the bubbles I need to fly through. They are 'scattered', which means that theoretically I could go around them, but what if they are inside other clouds? This looks tricky. Later in the day they are calling for better weather on the coast, but thunderstorms through the mountains. I tell them tomorrow looks better, and they believe me. And now they can't get an examiner this week in Edmonton, but there might be one at some little northern airport somewhere. I'm not sure whether I've finally done enough flight tests that I'm not panicked about this one, or whether I don't really believe they will be able to find an examiner on such short notice.

Vancouver, meanwhile, lives up to its reputation of being rainy.

I have to wait until I can get my camera fixed, because I want to properly document our game of nosewheel roulette (and I'm embarrassed to ask someone else to photograph it for me), so its still not too late to enter the contest to win a pair of sunglasses.

Is there a difference between "known" ice and "implied" ice?

Is there a difference between "known" ice and "implied" ice?

A question much debated here in the US. From the FAA's point of view in an interpretation (pdf)...

Summary: If all available information indicates a likelihood of ice accumulation, flight is conducted into the ice anyway, and ice affecting safety of flight accumulates.. you have conducted flight into known icing. If ice is only "possible", and your exit strategy works fine you're in the clear. So to speak.

Personally, flying light GA aircraft with no deicing provisions, any possible ice in broken or overcast cloud is a no-go forecast.

One of the scariest flights I can remember was stumbling into unexpected icing conditions in a C172 while on a parts run for a FBO. The little Cessna had no ice protection, and the only advance warning I had was hearing another pilot on the radio reporting "moderate icing and turbulence" shortly before I hit it myself. Rime piled onto the plane at an incredible rate. And of course, I was over a mountain range at the time. Of course.

I called Center to report the icing, request a lower altitude and a direct vector back to my departure airport. At around 5000 feet, the ice melted off, the plane was happy and the landing was uninteresting.

No one else had reported ice, so my boss was adamant that I get my cargo to its destination and assigned me a bigger plane. On my second flight, there were no problems - no ice, no nothing - just stratus, then lots of blue sky on top. But once I was on top, I could see a few cumulonimbus clouds jutting out of the stratus here and there. I'd probably flown into one of those "bad" clouds on my first flight.