I went to an agricultural fair recently. You know the sort I mean? With cows and pigs, and games where you try to throw a dart to win a giant stuffed dog, brightly coloured spinny rides with loud music, and cotton candy and barrel racing. I was describing the events of the day to a friend, when I realized I remembered all the animal pictures (you were supposed to "collect" them on a checklist, but I didn't bother) displayed inside a maze made of straw bales, and I could recite biographical information on the various cows I saw. Why did my brain choose to store that? That storage capacity would be much better occupied by information on how to ensure my autopilot doesn't fly me into a tree today. I got it to work well once, but ever since when I have tried to engage it, it is excessively pitchy. 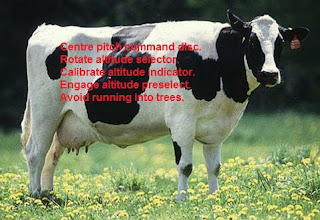 It has approximately five on/off switches. There's a large rocker switch for roll, square push on-push off buttons for heading, altitude, and something else not clearly specified on its switch, but probably pitch, plus a separate wing leveller. That's five, or it's six if you count the red pushbutton on the yoke, which doesn't work quite the way I expected.

Roll is the basic mode. There is a left-right roll knob, like balance on an old stereo system. You're supposed to centre that knob, toggle the heading lock button off, and engage the roll rocker switch. The airplane should now roll up to a 30 degree bank angle in response to turning the roll knob. If you toggle the heading lock on, bank should be restricted to twenty degrees.

Pitch only works when roll is already engaged. You're supposed to disengage the altitude on/off push button and centre the pitch "command disc," a vertically-mounted edge-on wheel with a flat spot that presumably represents the centre position. It tells me "with the airplane in level flight," implying that this isn't something I can do on the ground before takeoff, to rotate the altitude selector DN/UP knob (looks just like the roll knob) until the trim UP/DN indicator is level. The trim UP/DN indicator is a tippy line in a circle. The instructions next say to calibrate the altitude indicator to match the altimeter by rotating the knurled altitude indicator dial. The altitude indicator is a wide vertically mounted edge-on white plastic wheel with numbers on it representing altitudes, and intermediate lines between them. One edge of it has knurled ridges, so you can change which altitude is displayed, but it doesn't go that far. When I was at 8000' it was displaying 13,500' and I could only coax it down to 12,000'. Just two more steps: rotate the altitude selector knob to select the desired altitude and finally push the altitude preselect button to ON.

The pilot can trim the airplane with either the trim crank or the electric trim on the yoke, but trimming is automatic when the pitch section of the autopilot is engaged. There is a pitch trim warning light which should illuminate if the pitch is out of trim for four seconds while the pitch section of the autopilot is engaged. To me this could mean inoperative trim, runaway trim or possibly some balance problem with the trim surface such as ice accretion. You shouldn't use an autopilot in icing conditions.

Wing Leveller: The manufacturer has given this a cutsie name, shared by a passenger briefing system and a kind of torque converter, obscuring for the pilot what this function is supposed to do, but the hints that it is approved for use during take off and landing and is automatically disengaged by selecting the roll rocker switch suggest to me that it's a simple wing leveller. The pilot is advised that to make turns using this mode, she should press and hold the the off button on the control wheel, make the turn and then release the off button to re-engage the wing leveller. That would be the first 'momentary off' yoke-mounted autopilot disconnect button I've ever encountered. It looks to me as though the wing leveller mode is needed because the rest of the system is so crazy that it can't be momentarily engaged so the pilot can take her sweater off.

The instructions do summarize this in a way that sounds simple:

My issue has been that there is so much pitching that I can't troubleshoot it with someone in the back.

There is also an array of navigational functions that the autopilot can be selected to follow. There's heading, to follow the heading bug, OMNI and NAV to track the selected radial on the VOR receiver with approach or en route precision respectively, and there's a LOC and BC mode, which I've had no chance to check. There's also a glide slope coupler, and curiously, the instructions imply that the landing gear must be extended in order to use this mode. Or perhaps they just figure that extending the landing gear is such a good idea they will include it in the instructions.

There is also a procedure to ground check the systems before flight.

Turn everything off. Engage the roll rocker switch and rotate the roll knob full left and right. The yoke should follow. Centre the knob.

Rotate the pitch command disk full DOWN and full UP and see that the control column similarly moves fore and aft. Then centre the disc.

Engage the pitch function and hold the press-to-test for the trim warning indicator. After four seconds it should illuminate.

I'm going to need a pretty big cow for all this, aren't I? I wish I were as resistant to stress as Highland cattle claimed to be on their info card.

Update: I've since found some better instructions, and seem to have better control of it now.

Funny to read this straight after this. 1950s style automation is going to put people out of work. Yeah, right.

Maybe the windshield wiper control in on that panel as well.

Ooooh, a Magic Hand? I always those should have coin slots to run a chair massager.

While your autopilot manual appears to be rather incomplete, at least it's not in Engrish.

Some of the the computer hardware manuals we had to use back in the mid-80's were seriously confusing. Written by foreigners with only rudimentary English skills, they frequently resulted in unintended humor. After wiping tears from our eyes, we'd have to figure out what the author actually intended to say. It wasn't always easy -- especially when we couldn't stop laughing.

I was amused to read this just after reading the opening pages of Donald Norman's book, Living with Complexity. He is a great observer of how things work (and his earlier book, The Design of Everyday Things is a brilliant account of exactly what it says). On page 2 of his new book he asks, rhetorically, "Does the cockpit of a modern jet airliner look complex?" The answer he gives to his own question is:
"To the average person, yes, but not to the pilots. To them the instruments are all logical, sensible and nicely organised into meaningful groups."
Perhaps he hadn't come across your autopilot.