I guess I should tell you what we're doing here. There's a million-dollar camera mounted in the belly of the airplane and I'm contracted as a photo survey pilot to fly it around and take pictures. The mystery crosshairs and dot from a couple of days ago are part of the pilot guidance screen. Let me explain that.

The crosshairs is only one small part of the guidance system. While I am on line, the main screen depicts a red line for the track I am supposed to follow and an amber line with a green airplane on it for the track I am on. There are also two other parallel lines denoting out of bounds to either side of the central red line. That only gives my lateral positioning over the ground. I also have to keep the camera level and maintain the proper groundspeed and altitude. Groundspeed and altitude are poorly represented with tiny-font tapes slightly too far from my area of focus, and the targets not marked on the tapes but hidden off to the side, in among too many other unnecessary pieces of data. But the pièce de résistance is that little green dot. 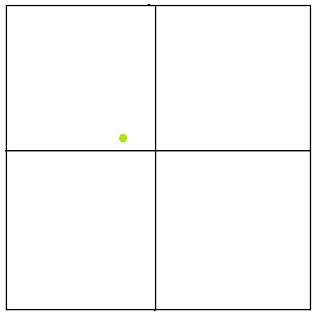 With the green dot centred exactly on the crosshairs, the airplane is perfectly level and the camera pointed straight down at the ground. (The operator adjusts the camera to maintain "level" for different cruise attitudes at different power settings). You see that in my representation the green dot is slightly above the line and a little bit further towards the left. Many of you guessed that it represents a needed change in aircraft pitch attitude and bank angle. Did you guess that I have to steer towards the dot, by pitching up slightly and rolling left a bit more? You would be wrong. Did you guess that I have to "fly the dot" back to the centre by pitching the nose down ever so slightly and rolling to the right? You would also be wrong. Amazingly, one person did get it, albeit on his fifth guess, but you've mostly demonstrated the natural way to think about it. This is not a natural interface.

The configuration shown indicates that I should pitch down slightly (away from the dot) and roll left slightly (towards the dot). They are both minuscule corrections. The airplane is pretty much wings level in a level pitch attitude, but it is asking me to apply the tiniest bit of forward pressure on the control column and a touch of roll to the left. I was completely baffled as to how any sane human being could think this was a reasonable interface, until I showed it to a computer programmer. He explained, "If the dot is up, the nose is too high. If the dot is to the left, the left wing is too high." It makes perfect sense, so long as you don't know how an airplane actually works. And thanks to the amazing adaptability of the human brain, I am able to use this thing. I don't know if I'll be able to fly IFR on an attitude indicator anymore, but we shall see.

The crosshairs depiction on my screen is at the bottom left, far enough away from the lateral placement line that I can just see both at once, and far enough from the altitude information that I almost never see that. If you're thinking, "That's an awfully pale dot colour. Why didn't you use a brighter green?" then you are thinking something that I have spent several hours thinking. The dot on my screen is actually paler than the one in the simulation above, and the crosshairs on my screen are tiny. If the light is bright, I can't see the dot at all, and because of how pale it is, I have to focus on it to see it, not rely on peripheral vision. When the dot goes "too far" (I don't know how that is defined) from the centre in any direction it turns red, which is helpful in that the colour change allows me to see it, but bizarre in that in bright light it's like playing whack-a-mole, just flying along wondering where the red dot will pop up next.

It is a lot like playing a video game all day. I make Pac Man jokes all the time. "Maybe this dot will give me the energy boost!" I loved all your creative explanations of the nature of the dot.

The position of the dot relative to the target makes immediate and perfect sense to me. It's where a laser beam shooting straight out of the camera lens would hit the ground. With that perception, the proper adjustment of aircraft attitude seems natural and obvious...but I'm a computer programmer, not a pilot.

Oops, left out a phrase: "...would hit the ground *relative to a point directly beneath the aircraft.*"


(I don't know what to make of the verification word: spumflu.)

So what does all this have to do with The Mile High Club?

I have to ask -- wouldn't it be easier if the whole electronics brick were connected to the autopilot brick so you could press a big green button once and then just "see and avoid" and make sure nothing bad happens?

The autopilot, I am told, isn't precise enough to ensure the airplane is always wings level at a photo centre and isn't quick enough to respond to sudden turbulence just before one.

So the square-and-dot thingy is a representation of a flight guidance device for a aircraft mounted camera. I am delighted to say that that explanation never even crossed my mind.

I agree that this guidance display was most likely invented by a computer programmer who was not a pilot. The programmer was probably not color-blind, either, or they would have come up with something a bit more accessible than red/green dot whack-a-mole. It's also likely that the programmer was a video game fanatic, and that their company's marketing department is either non-existant or didn't get to have any say in the device's appearance. Which is not necessarily a bad thing.

DataPilot: pilots and electricians are amongst the few types of users it's not unreasonable to assume are not colour blind.

Ed: Except that a colour-blind person can hold a commercial pilot's licence in Canada, with a restriction forbidding night flying (at night you have to be able to see different colours of lights). And the two daytime-only jobs a colour-blind pilot can easily hold are float pilot and photo survey pilot.

Most people with red/green color deficiencies can obtain a medical here in the US as well. Their medical usually comes with a restriction limiting them to daytime flying only. It's not much of a handicap for private pilots that fly VFR.

While it's possible that the most severely color-blind individuals could be disqualified from obtaining a medical, I've never known anyone that that happened to. I have known a couple of perfectly capable color-deficient pilots, however. One of them was a computer programmer.

A person with color deficient vision can also be a commercial pilot and fly at night. I have a friend who is in that boat. He has what is called a SODA, or Statement of Demonstrated Ability. Getting that, IIRC involved demonstrating that he could differentiate between a red and green signal from an Aldis Lantern (that's what they use for light signal for no-radio operations at a control tower.

I'll agree that an indication that it hard to see (like the green dot) is poor design. Visibility aside, I'm not sure that I agree that the presentation lacks sanity or reason. It is simply raw data, and a fairly straightforward presentation of the raw data, ie: where is the camera pointing vs where do you want it to point. True, it is not processed into a "manipulate your flight controls thusly" cue, but Raw data never is.

I would suggest that you deal continuously with raw data indications which are every bit as non intuitive, it's just that you've become accustomed to them to the point that it has become second nature and subconcious to process the raw data into a flight control maniplation.

One example would be altimeter indications, there is nothing about having the hundreds pointer point at 1 instead of zero, which inherently suggests "push forward on the yoke", and attempts to develop a system to translate pointer position to flight control input would have to include the fact that when it points to 9, it requires the opposite input, and you'd likely have to invert that system when the desire altitude is xx500 ft. Such a system of trying to translate pointer position into a control input would be pretty unwieldy, and a lot more difficult that simply reading the altimeter for what it is, altitude, checking how that compares to what you want and deciding how to move the controls to achieve that.

Another example would be the inclinometer. (The "ball") There is nothing intuitive about correcting an out of center indication of the ball, and in fact, for many new studen pilots it's pretty confusing until you apply the rules of thumb to "step on the ball" for rudder input and "Roll the ball" for aileron input.

Both the altimeter and the ball are every bit as non-intuitive as the the camera aiming display, it's just that you've been using them for so long, you are no longer aware of the interpretation you mind does in translating their indications to a flight control input. I'm pretty sure that if you spent some time using this system, your reactions would soon become as automatic and free of conscious thought as are your responses to an off altitude or out of trim indication.

As far as the significance of the responses of the readers, that has to be filtered through the fact that in the complete absence of information of what is being represented, everyone was forced to guess. And everyone, myself included at first, guessed incorrectly, assuming that it was a flight navigation display, for controlling the airplane in the more normal sense. Arriving at an incorrect conclusion because of an invalid assumption is not the same as arriving at an invalid conclusion despite being in possesion of the relevant facts. I'm not complaining about the game, mind you, it's fun and I enjoy playing. I'm just saying that having people guess without any understanding of what is being presented sheds no relevant light on the sanity or reasonableness of the presentation. A far more accurate measure would be to explain to people what the display is indicating, and ask them to figure out what control inputs are required. I would be willing to bet that the vast majority of people would be able to quickly determine the correct control inputs. After all it's not like they put you in the plane and said: "We're not going to give you any indication of what this display means, we're just going to hit you on the back of the head with a rolled up chart whenever the green dot isn't on the crosshairs"