I've spent my career flying airplanes with instrument panels that haven't been substantially updated since the aircraft were designed in the 1950s or 1960s. Anything electronic is a newfangled after-market device not in the original aircraft specifications. Of course I haven't had any trouble using the newfangled stuff with which my various employers retrofit their aircraft. A new installation always comes with a manual, and you can usually find manufacturers' information online, too. I've enjoyed electronic tachs, EGTs, navcoms, and even a Sandel-OMFG-it's-everything-in-one-instrument, please don't let me push the button that makes it turn into a microwave oven just as I'm intercepting the glideslope (okay I had a little trouble with that one, but not as much trouble as the poor guy who owned it and had hired me to help him pass his IFR renewal with it). There's an instrument I've seen a few times, in airplanes I've flown once, or flown for short flights, and never bothered to learn how to use, but now there's one installed in an airplane I will fly for work, so I'd better learn to use it properly.

It's a Shadin Digital Fuel Management System, a fuel flow meter that, given information on how much fuel you started the flight with, should give excellent information on how much is left. See, normally you spend the flight comparing the known time and power setting with the fuel gauges and hoping everything you are looking at is as accurate as the agreement among them. You could have some weird fuel leak on the same day as you had a fuel gauge over-reading error and had your watch stop. It's not likely, but you could. That's the sort of not likely but it could happen scenario that pilots are paid to think about every day. The Shadin is another tool for tracking fuel consumption, and it's supposed to be extremely accurate, much better than fuel gauges, and it's digital, with readouts like fuel endurance so I don't have to peer at parallax, estimate needle widths, or even do any math.

Here's a post based on the manual for the Digiflo model, with notes on the slightly different Digidata model, which I think is on another member of the fleet. I start by verifying the fuel quantity the only way I really can, by visually confirming how much fuel is in the tanks. So this is on the ground, immediately after fuelling. Then I enter fuel on board into the device. It doesn't have a keyboard. In fact it's one of those nifty little pieces of electronics designed to fit in the dashboard hole made for a traditional round instrument, about the size of the bottom of a standard soup can. The picture below isn't quite the right product. Mine has three display windows, three push buttons, one three position toggle switch and a four position rotary knob. The top window normally displays whatever is selected by the rotary knob: NM/GAL, GAL. TO DESTINATION, GAL RESERVE or ENDURANCE HRS:MIN, and is flanked by the GAL REM. and GAL USED push buttons, which while held change the display appropriately. The bottom two windows display the fuel flow per engine. 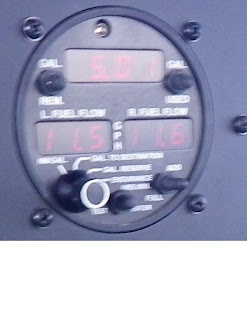 The Digidata has the "ENTER/TEST" button in the left, a "REM/USED" toggle in the middle, a "FULL/ADD" toggle on the right, a rotary knob, and two display windows, one for the fuel flow and one for whatever is selected on the rotary knob. On that model, to display the fuel flow per engine you squeeze the REM/USED and FULL/ADD toggles together. I'm not sure if this is the right picture.

There are three options for entering fuel on board on the Digiflow. One is if I have filled all the tanks, in which case I move the FULL/ADD toggle to the FULL position and hold it there while pressing the ENTER/TEST button. I can then press the REM button to verify that it reads the full amount as fuel remaining. That's already set for the airplane. If I'm not filling the tanks I have to specify how much fuel I have added, by holding the REM button and pressing the TEST/ENTER button until it reaches the right level. For some reason there's a second way to do this, by holding the FUEL/ADD toggle in the ADD position and pressing the REM button to reach the right number. If I overshoot, I can press and hold the USED button and then press and hold the TEST/ENTER button until the right value is shown.

Once the amount is entered, I press the “ENTER/TEST” button and it should display in succession:

It achieves the fifth calculation because it can talk to--and I love this old meets new specification--the panel mount GPS or the LORAN C. Someone must have really loved his trusty LORAN C.

Fuel flow transducers are like little turbines spinning in the fuel lines, but if you thought "hmm, the speed of the turbine might not always be directly proportional to the fuel flow rate" then you would be right. If you not only did not pause to wonder that, but aren't sure whether it's worth pausing to wonder what it means, then you should pause instead to give thanks that there are engineers in the world, because it's important. The math to take into account the effect of 'viscous', 'transient' and 'turbulent' flows is probably fascinating. Maybe instead of stealing linguistics, I should have been stealing fluid dynamics. Those classes are probably harder to figure out when you drop in three quarters of the way through the semester, though. The manufacturer also assures us that if a transducer somehow gets stuck and stops spinning, it will not impede fuel flow to the engine.

The readout updates very rapidly and is easier to see than the EGT. I can see that once I get some familiarity with the airplane I will be setting mixtures by fuel flow, and then confirming that the EGT is within limits, rather than peering at the tiny digital or usually inaccurate analog EGT gauges. Also the display flashes if the fuel remaining is insufficient to reach the selected destination with 45 minutes reserve fuel.

Very cool, I want one for my new (to me) Bonanza.

"l'essence aviation" - seems like it's missing something. I think I would have said "l'essence d'aviation", but my French is super rusty after 30 odd years of near total disuse - not much call for it in Texas. And the last time I was in Quebec and my car needed fuel what I bought was called "gas" or "gaz". I think I also bought a "tire". Perhaps the linguistic police have stamped those out.

But my French is still good to agree 100% with your last statement!

(most pilots would even omit the "de" in front of "carburant").

Nice post, as always. I won't touch the French language stuff as way out of my class. As for the fuel gadget, USE IT, but only a double-check on the basic math that you already know - I hope - do on every flight. When your regular calculations are close to IT, check again in 15 or 30 minutes. When the calculations do not agree, 1) drive the airplane 2) check your math and 3)drive better. You already have an alternate and know of suitable fields on your path. If the numbers do not agree within reason, figure it out on the ground, please. Cool gizmo, but not as smart as a sharp pilot, paying attention to the details. More often than not, the gizmo is a good reason to land early and measure the tanks. Duh? -C.

Hi,
Probably a silly question. But, assuming that you are flying in Canada, is there a way for this device to display/calculate in Litres rather than Gallons? Does it distinguish US vs Imperial Gallons, or is it another case of the US way being the "right/only" way?

We just picked up another airplane with that unit installed. Honestly, what's in your post is now all that I know about it. I'll try it out next time because having a little red LED display flasing 'low fuel' at you all day tends to become somewhat annoying and possibly a tad unprofessional.

D.B.: I think aviation is an adjective, not a noun in that phrase, hence you don't need the d'. L'essence bleu - blue gas, l'essence aviation - avgas. I know that tire is pneu and I thought gaz only referred to gaseous phase, as in est-ce qu'on peut obtenir de l'oxyge\ne aviation ici?.

sean: I believe it has that capability, but we keep it in gallons because the aircraft POH and markings are in gallons. I'm sure if you had an airplane not from the US, Myanmar or Liberia you could get it programmed in modern units.

Jepps: Glad I could help. The trickiest part was at first I was pushing the FILL switch the wrong way. Full manuals at the manufacturer's website, but you have to right click to download, they don't just open.