Rivers and Mountains and Chocolate

I sleep for not long enough, but there's too much noise and light to sleep more, so I get up and make a phone call. I sit on hold for half an hour. I ordered The West Wing complete series earlier but the friend who receives mail for me e-mailed to say he already owned it and I could borrow his any time. So I wait on hold until I get a Return Authorization Number to send mine back, then go for breakfast. I take the Do Not Disturb sign off the door for my weekly room cleaning.

I get back from breakfast (a waffle). The room is cleanish, but the TV is still not fixed. So I nap. Then I go to Boston Pizza. May I go home yet?

The a.m. crew got off to a late start again. Fog, of course. I meet them after landing at four and we discuss a brake that was spongy on the taxi out, and the left inboard fuel gauge showing half full between half and quarter tanks. Neither of these is groundable now, so the AME says he will look at them tonight. That discussion over, I say, "Well, I guess it's time to make airplane noises," and both the other pilot and my mission specialist immediately and simultaneousy make propeller noises with their lips. I love my coworkers. We get in and make airplane noises using the actual airplane. 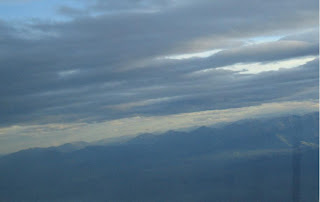 It's a good flight, out over the mountains and rivers, with the sun slowly creeping past the layers of clouds down to the horizon. The clouds serve as a sunshade from the glare of the sunset. I'm grateful when they do that. Finally the sun does go all the way down, and then darkness follows, about the time that we're almost done anyway. We finish up and head back to the airport. It's harder to track a straight line in darkness, especially without an HSI. I scan across to the right side one, and use the GPS. I might be quite literally lost without them. The compass is not that useful here. The wisdom of the rule stating that I need a heading indicator at night is sound. 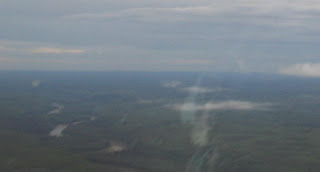 The airport is invisible on our first pass, because we're not in the direction of a runway and the trees alongside the airport block the edge lights I might have seen. Or maybe they weren't turned up yet. They are bright enough to find the airport, and on final I have red-blue-green and a light in the mirror. (That's the red mixture levers forward, the blue propeller levers forward, three green lights on the dashboard and the light mounted on the nosewheel reflecting off the mirror on the nacelle, confirming that the nosegear is down and the landing light works.

I'm wired after the night flying. I haven't done a night landing in ages, having been the morning pilot or in the north all summer. It's still legal for me to have done one tonight because there are no passengers on board, just crew. It goes well. I guess I haven't forgotten how. The AME meets airplane as I shut down, here to look at the gauge issues reported by the a.m. pilot. I can't confirm the fuel gauge issue because I landed with half tanks on the inboards, and the brakes worked fine for me. He opens an access panel to confirm the type of fuel sender. He'll order a new one.

The FBO charges $50 for a callout between five and nine pm and $100 for one between nine pm and seven a.m. Fog is not forecast tomorrow, and even if they don't get going before seven, they will want fuel first thing, so we decide to pay the $100 callout fee now, and not risk not being able to get a fueller to come on Sunday a.m. Sometimes you can't buy fuel before noon on a Sunday at all. It's not that they are closed, just that you can't get anyone to come out. Just because there's a callout phone doesn't mean the person who took it home is going to answer it. They answer my night call--I did warn him we might call around midnight. It looks like the fueller's friends have decided to keep him callout company. There are about half a dozen people here, one wearing pajama bottoms. I ask if I may just leave now and come back and pay tomorrow. They okay that, so yay, day over.

I've had the same very slight headache for three days. I self-medicate with chocolate.

Completely off-topic, but did you see that Toronto Airways has an agreement to close Toronto-Buttonville Airport and redevelop the land within five years? It's not terribly surprising given all the development around the airport, just disappointing. Here's the Toronto Star's article.

I made airplane noises while reading this post. I bet I'm not alone.