All Aboard the Pan Am Clipper Ship

At the beginning of the year, I introduced you to Elizabeth, who spends much of her spare time, energy and money on the Postcard Project, sending postcards to anyone who wants one, especially to those whose lives are improved by the gesture. She's still alive, beating all kinds of odds, and still sending hundreds of personally selected and hand-decorated postcards. I keep telling her not to send them to me because firstly I'm never home to receive them, secondly she really does have limited resources, and thirdly I didn't think she was ever going to beat the very first card she sent me. But just as she defies the expectations of all medical professionals, Elizabeth defies any attempt to get her to stop sending postcards. And I think she may have found a better one. 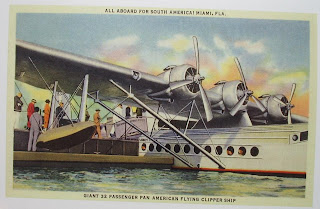 It's not just a postcard, but an actual card depicting the boarding process on a "Giant 32 Passenger Pan American Flying Clipper Ship." That's a flying boat, a seaplane, with a giant high wing fitted with four Pratt & Whitney engines. I can only see three in the picture, but I assume it's an S-42 and that artistic licence has hidden the edge of the fourth engine in the picture, so they didn't have to depict part of the engine cut off by the frame.

Elizabeth puts a lot of pictures of pictures on her blog, and they don't have big camera flash solarization marks on them. I found out how she does it, too. She waits for a sunny day and photographs them in natural sunlight. Next I'll have to get her to teach me how to make them not be crooked.

I've never flown an airplane of that size, especially not a seaplane. My experience of flying boats is that on account of the hull being down at water level, I don't have a good enough view of the water around me to spot sticks and deadheads and waves. It's nerve-wracking not knowing for sure that your takeoff surface is clear. I see that a number of the clippers were destroyed in take-off accidents so perhaps my caution is justified.

When I told Elizabeth I would be posting this one on my blog she urged me to tell you that she has other classic airplane and car postcards, plus railway, cats, dogs and space. I only ask that if you're going to take advantage of her generosity that you consider getting something for her, from her wishlist.

The Golden Days, I think... Pan Am Clippers! I wonder if there were tattooed drug addicts boarding in shorts and flip-flops.