I wake up and check my text messages. I should buy a scrubbing brush so I can clean my nails better. There are three texts for me. The first one says the a.m. flight departed at 16Z. The second one says it didn't depart after all, but aborted on the runway for an engine problem. One of the engines--not the one that had the problem earlier--wasn't making full manifold pressure. The third text asks me if I noticed any unusual yaw or power loss. No, I didn't. It climbed like a dog,but it was thirty freaking degrees out, so I can't blame it. They're disassembling it looking for a problem.

Meanwhile I play on the Internet. Dav e Carroll, the United Breaks Guitars guy has release the third and final song to make good his threat to United. This one is no longer angry or sad. It acknowledges that United "broke" his career, but that while he has come out well from the incident, there are a lot of other customers whose damage claims have been ignored and who haven't been able to fight back as well. And it's funny Canadian folk music, which is what I like. 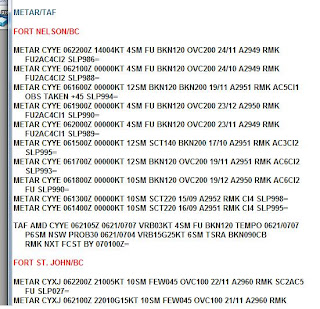 I check the weather and it's ... um ... interesting. Not the weather itself, but the delivery. The METARs have been served up on the screen in completely random order, not chronological at all. The number after 06 in each row is the observation time. There are hardly any two in the right order, just scrambled all over the place. The weather turns out to be irrelevant because the problem is suspected to be a failure of the fuel servo, brand new with the engine, and we don't have a spare with us. We are getting one on Greyhound, yes, the bus. It's the fastest way to get it here, short of chartering a plane to fly it directly.

As we go out to dinner I hear the AME on his phone telling someone about the problem. "And then the GFY light came on," he explains. I ask the other pilot sotto voce what that is and he whispers the answer back to me. Oh. Right.

I'm only a student pilot. What is a GFY light?

Um. Whilst not suggesting this myself, it would mean an invitation along the line of go ... ah, friendly ... yourself.

I believe it's in the genre of fubar and snafu.

To deal with the light, some part or component will be found that will have to be marked NFG and replaced.

Dave Caroll's songs aren't the first on this theme: Tom Paxton's "Thank You Republic Airlines" is splendid - 1980s, I guess?

I think your "abbreviations" post deserves an appended section for these less than official ones, since they're usually the most interesting ones.

When I raced sailboats, failing to start the race got you posted as "DNS," not finishing (ie, the boat broke really bad) "DNF," hitting somebody else and getting kicked out "DSQ," and somehow everybody knew that if you just sailed badly and came in last, you were "DFL."

I think your "abbreviations" post deserves an appended section for these less than official ones, since they're usually the most interesting.

When I raced sailboats, failing to start the race got you posted as "DNS," not finishing (ie, the boat broke really bad) got you "DNF," hitting somebody else and getting kicked out "DSQ," and somehow everybody knew that if you just sailed badly and came in last, you were "DFL," though you'd never see it on the score sheet.

Reading "thirty freaking degrees out" made me wonder how my sense of blog delay had gotten messed up. I was sure this was supposed to be summer, not below freezing...and then I figured it out.

I should have known that. Now that you say it, it makes sence what GFY means. In all my army years I have never heard that one. I will add that to my vocab. Thanks.