Ready When It's Ready

The next morning I sleep in until I wake up, which turns out to be seven. I expect to get the airplane back at the end of the day, so I stay out of their way until then. This hotel doesn't have guest laundry facilities, but the one in Lloydminster does. I have two more day's worth of laundry, so I can hang on without having to go to a laundromat.

In the afternoon I go out to the hangar again. They are still working on the engines, one cylinder on the right has low compression, so they are looking at why. I ask to borrow a shop vac and they have one, but it doesn't have wheels. It's pretty light, so I just carry it out to the airplane and set in on the floor. I vacuum the floor of the cockpit and all the upholstery on the walls and seats. It looks a lot better, a bigger improvement than I expected. It's a pretty powerful vacuum cleaner. As I go through the cabin trying to get all the dust and grit from between the seat rails and the floor and out of the little apertures for seats and other equipment to snap into, I almost vacuum up an entire tiedown strap. I hope there wasn't anything important on the floor that I missed seeing!

I clean and apply Ice-X to the wing and tail boots. That's a coating that it supposed to protect the rubber and help it release ice better, and it also makes it look nicer, which in this season is more what I expect to do with it. I do the propeller elements, too. The instructions say every 50 hours for boots and every 15 hours for propellers. They certainly don't get that. That would be every day. I suppose I could make it part of the preflight.

Every once in a while the maintenance crew calls on me to play pilot inside. With everything shut down I work all the levers: throttle, prop, mixture, alternate air on each side as they test the travel and make sure the relevant system is responding as it should. Then they call me for the gear swing. I hate this one. The airplane is up on jacks, but sitting in the cockpit all I see is that it looks as if it is on the ground and I am raising the gear. The gear horn wails and they signal me to advance the throttle to turn it off. I should actually be testing that more often, briefing the crew that they will hear a horn briefly, then retarding the power on final before extending the gear to make sure the warning system works. I don't have an SOP on testing it.

Here's the plastic piece I threw away. 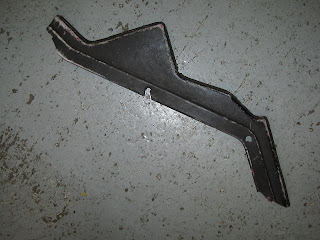 Once the airplane is ready to come off the jack they need a couple of people to get inside to take the weight off the anchor that is holding the tail down, so they can remove it. It looks as if the airplane will be ready on schedule, but then the the head of maintenance asks me when my duty day ends. "I left the hotel at noon, so two a.m." But I admit I'd really prefer not to be flying the airplane back to Lloydminster at one in the morning. He says he'd never make me do that. He'd flatten a tire or something rather than force that on me. I think he was hoping I'd duty out at 5 p.m. or something so he wouldn't have to make the decision whether or not to ask people to work late. Fortunately it's the PRM's job not mine to crack the whip over maintenance crews, and he's in the communications loop. I let them know that (a) we wanted the airplane to be ready the second after it arrived, and that (b) everyone involved knows that airplanes are ready when they are ready. They work hard up to the end of the day, but decide that in the interest of safety and having things done right they will keep the airplane another night and finish up in the morning. They promise the airplane by eleven.

The hotel where I spent the previous night is now full, but for two dollars less I get another one that has guest laundry and a pool. I do my laundry in my swimsuit, swapping from washer to dryer between laps of the pool. That way I can wash all my clothes at once and get a workout. I think the extra weight I brought into this rotation is gone now, and that I would look hottt in my swimsuit, if only it weren't such an ugly utilitarian one. Inspired by a Facebook conversation about the difference between an American and European monokini (and definitely vive la difference), I rectify the ugly swimsuit issue, going online to order a better one for this summer. A monokini. But the American kind, so I can wear it at conservative venues.

Excellent point about the gear horn... It's annoying in the sim, but under normal ops there's never really a place you should hear it. We (usually) check the ELT, and the stall horn on preflight - why not the gear horn?

And, my how times have changed. 'Trix talking about swimsuits and monokinis and nary a comment. I can recall tawdry talk of compression tights and flexibility...

I think everyone took the Victoria Day long weekend off and never came back. Hardly any comments this week.