If a cellphone has an alarm, the concept that the device might sit next to a sleeping person has occurred to its manufacturer. And they have probably grasped the idea that during the day the user would be moving around, not next to an outlet, and thus that nighttime would be a reasonable time to charge it. So why then would they have it beep every hour or so while it is plugged into a charger? With my cellphone fully charged, I check out of the hotel and meet my coworker at seven a.m.

The weather is good, with the exception of very low visibilities in Revelstoke, but I attribute this to valley fog. The river there will be open now, but there will still be snow in the valley, setting up conditions for moist air to be cooled from below. I don't think it represents extensive cloud to altitude. The latest visible satellite photos are still black for BC, and the infrared show clouds but you can't tell the heights. We just have to go on experience. There are still headwinds, but not the crazy turbulence-inducing ones from yesterday, so it's a go.

We load all the gear and secure it, coil our electrical cords, and put away the engine plugs and tents. After warming up the engines while sitting on the grass, I just power off the grass and onto the apron. It's pretty level and not that soft, doesn't even take run up power. We climb out westbound towards the rocks, keeping below ten thousand feet and then climbing again when the looming rocks suggest it's necessary. I note the time as we pass 10,000' so we know how long we can legally stay above it. We have oxygen equipment on board, but we'd rather not breathe with tubes up our noses or bags over our faces if we don't have to. The weather is good, with excellent visibility and we fly right over Golden airport, position reporting with Flight Services on the Golden RCO as we do so. I seem to recall they didn't answer, so I just made the report blind. Perhaps their antenna was damaged in yesterday's windstorm. I don't remember seeing that NOTAM.

I don't know how many times and in how many places I've flown over the spine of the Americas, but I never get tired of admiring the sharpness of the peaks and the tenacity of the snow and ice that highlight them. When you see mountains from the plain or from the coast they look two-dimensional, a jagged line between you and the other side. But every peak you climb over seems to reveal another one behind it, and they stretch on to the north and south all the way to Alaska and Chile. My coworker regretted not having a camera and I pointed out mine for his use, but now that I look at the card I see he didn't take any pictures, so I have none to share.

The next valley over is Revelstoke, but we don't see the airport, just a glimpse of the river, as most of the valley is choked with low cloud. After Revelstoke the mountains subside into big hills and we come over one of those hills to descend into the valley where we land. Through the magic of time zones we're there bright and early. We immediately fuel and then take off for another flight over the hills and valleys. It's really beautiful country. We imagine waterskiing down that long lake. It's probably still way too cold for swimming, but the grass is green and the lake is blue. We're looking forward to spending some time in a town that exists because people want to be here as opposed to because the town is where the minerals are.

I notice a column of smoke coming from the ground and we look at it more closely as we go by. It's a house on fire. Firetrucks arrive fairly quickly, and after a while the smoke subsides. I hope everyone is alright down there. 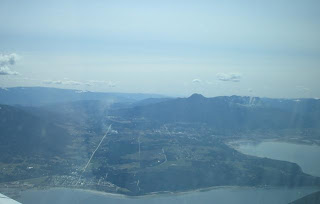 After some hours I'm hungry and cranky. There are granola bars up for grabs (last summer's Alaska food box is reaching its expiry date) but I haven't brought enough water to eat them. I bemoan my plight and am rewarded with someone's spare water. Drink, eat, happy. Life is good. We're almost done the work so we land for more fuel.

The fueller is great, offers to stay late to fuel us again if need be, and offers us premium parking in front of the terminal, within reach of an electrical outlet. This airport is well supported because there are over 200 medevacs a year out of here, and there's also a very active local pilot community. It might have more hangars than Red Deer. There's no airline service because the valley fogs up too easily and is too narrow to design a safe GPS approach that would come low enough to reach the runway in those conditions. There are literally high hills on all sides of the little runway and the CFS warns that only those familiar with the local area should use it during the hours of darkness.

We have a couple hours before dark, and seeing as we started our day at 7 a.m. we are good until 9 p.m. for duty day, so we have time to go up and finish the mission. I offer the flight to my coworker, but he says to go ahead and finish what I started. He's making things efficient by fine tuning the engine so I can concentrate on not flying into the hills. I give him the radios too, so he can watch traffic while I watch rocks. There's a slight tailwind for the more easily accessible runway, and as I didn't take full fuel for this hop and considering the moderate temperature, I elect to take it for flight efficiency. When we call airborne, another pilot calls up with intentions to join downwind for the runway we announced vacating. I know from his callsign that he's flying an ultralight, much more sensitive to a few knots of tailwind than I am. As I draw breath to ask my copilot to warn him, he's already on the radio doing just that. The other pilot thanks us and amends his intentions to land with the headwind.

We're about to set up for the aerial mission when the mission specialist discovers he has an equipment problem and asks us to land. We fly down the valley far enough to turn around and come back onto the same runway as the ultralight used. He's clear now. I pull off the runway into the runup area and wait while the problem is sorted out. It's almost seven o' clock and the mission shouldn't take more than an hour and a half, but I'm looking forward to it being over. After a few minutes on the ground the specialist decides it is over, to be continued tomorrow, and we taxi in and park. There is a chance of frost, and we want an early start tomorrow, so we cover it all up with tents and wing covers and head to the hotel.

As we check in we realize that we changed our watches crossing the provincial and timezone boundary, but not the idea that 7 a.m. to 9 p.m. is fourteen hours. As we turned our watches back we almost scheduled ourselves for a fifteen hour day. Scratching the second mission left us with only thirteen hours worked, so we're legal. But tired. I discover I have left my wallet in the airplane, but I have my passport for ID and the client pays for the rooms anyway. My most excellent coworker lends me supper money. After waiting way to long for supper and the bills, it's back to the hotel where I curse out the finicky hotel Internet as I do my daily report (10.4 hours flight time) to company, and finally I go to sleep.

re: "because the town is where the minerals are."

I often look down at towns and cities and wonder how they came to be where they are. And how long they'll be there.

Ha! My first thought when you mentioned you were crossing time zones was whether you got to report "7 a.m." to "9 p.m." as fourteen hours, or whether you had to use elapsed time.

But thinking about it further, wouldn't you just record all times in your logbook in UTC? I do that it work for things where it's important to know what time something really happened.

Wow. BC does look like a pretty nice change from frozen featureless prairie. Someday, I'll visit - by air.

Yeah.... timezones. The FoxClock plugin for firefox has saved me, but can't when the data is too vague.

I hate daylight savings time. That throws another "locally decided +/- hour on political boundary" thing into the mix.

And then there are the people unclear on the concept. I got an email announcing a conference call which mixed local (European) time, "central time" in the US and helpfully noted "daylight savings time adjustments are not included in the above times". huh? I guessed wrong and missed it.

I wish more people would just use GMT in these cases.

My duty time record and airplane logbook does show all times in Zulu, but my what time I started work this morning record was stored in my head in local.

Ah, that's the problem. The hardware clock should always be in UTC, and never use that Linux kernel option that lets you keep it in "local time" (whatever that heck that is). Sure, if you dual boot, Windows displays all times in UTC. But you're used to using that anyway, right?

(I am serious: all my Windows boxes actually do run in UTC for this exact reason.)

((Though I must admit, even I have my limits, apparently: my Playstation 3 is on UTC+0900, as I discover to my dismay every time I copy a file to a USB memory thingie.))

Hi Aviatrix: I know where this nice airport is located - just to the north of where I live. Have been reading your blog for a long time now, off and on - if I had known you were going to be in town, I would have come up to meet you! I'm just a 150 flyer but do enjoy your blogs.