To the Nipple and Back

Next morning my coworker knows there is frost on the airplane, because he watched it starting to form as he was holding the flashlight for the AME. Ay carumba, I know he doesn't have very good gloves either. He still has all his fingers, and he's ready to fly, so we go. We don't have proper deicing fluid, because it's not available here and it's considered a hazardous material that we don't have a permit to carry with us. So we're using winter windshield washer fluid, which you can buy at any gas station in Canada, but which, when diluted with water from the frost, will freeze to the airplane in these temperatures. To get around this, we first brush off as much frost as we can, then as we apply the deicer and immediately wipe off the resulting solution with rags, before it can freeze. Yes, this is slow, cold and irritating. But it works and our airplane is now as clean as one in a Transport Canada training video. What do other people do? Other people most likely don't operate out of an aerodrome with no hangar space or deicing services in the Yukon in October.

There's a helicopter parked at the fuel pumps, so I walk down to verify that it isn't blocking the avgas. There's room, so we bring our critter around to top it up. The bonding strap is broken. Like most fuel pumps, there is a retractable reel of wire next to it with a big spring clip on the end. But when I pick up the spring clip, I discover that it isn't actually attached to the wire. I run the wire out to the airplane, wrap it a couple times around a contact point on the nose gear and then clip it down with the spring clip. I'd call the fuel supplier and get them on fixing it, but it's Saturday of Thanksgiving weekend, so there's unlikely to be a response.

We chat with the helicopter guys while we are fuelling. They are with the Yukon department of natural resources, coming from Whitehorse, I think they said. They ask where we're going. It doesn't have a name that I know of, so I wave my hands in the air and say it's by a particular wiggle in the Yukon-NWT border. "Oh I know where that is," says one of the helicopter guys, "I use it for navigation reference, too. I call it the nipple."

The flight is spectacular. I take pictures knowing that they will never convey what it is like t be in the clear cold Yukon air looking out at these peaks, range after range of mountains all perfectly iced with snow. There are literally thousands of peaks and probably no one has been on most of them. Most of them have never even been given names. I jokingly name one after the mission specialist, and we take some pictures of it, but now that I look at my photos I don't know which one is his mountain. Feel free to claim one for yourself. I think there are enough mountain peaks here for everyone to have one. 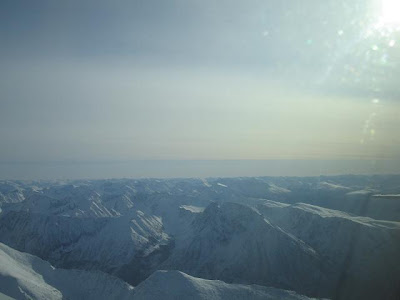 There are flatter valley areas, but much of the area is like the picture. Some of the mountains are unbelievably steep. I'm not sure how the snow and ice cling to it. In places the rock itself has strata and the striations are visible through the snow, because each layer juts out a different amount. We try to guess which areas of white are glaciers and which are just October snow, but it's hard to tell. I imagine bighorn sheep balanced on the edges of the rocks, but it's hard to know the scale, and I never see any sheep.

We return to Watson Lake after six hours, and as my co-worker turns final I tease him. It's a perfectly aligned approach, with two red and two white PAPI lights at the side, so I say, "What's with this stabilized approach thing? I thought you were an aerial work pilot?" He knows what he's doing. The CARS guy notes us down and reads the zulu time to us as we taxi off. Quite useful, really, for pilots who aren't good at remembering to note their downtime as part of the after-landing checks.

There are literally thousands of peaks and probably no one has been on most of them.

I envy your glimpse of the edge of the world. I just finished watching Werner Herzog's "Encounters at the end of the World". Absolutely unbelievable. You could easily imagine being on another planet entirely in the Arctic - or Antarctic.

Especially under the ice. If you ever wondered what could be under Europa's ice in the water... it could scarcely be stranger.

Not sheep, you should be looking for Sidehill Dodgers!

Those who think they can Google-zoom in on the satellite and see where we were working will be disappointed after a couple of clicks on the plus sign, though.

Here's a de-icing trick I learned from an old freight dog. Go to the local Wal-Mart and pick up one of those plant sprayers (that you pump to pressurize). Get some of the 50/50 car radiator antifreeze mix, and make sure it's the one that is safe for aluminum (I bought Prestone Premium at $9US/bottle). Mix it 50/50 with hot water in the spraying bottle.

Take it out to the plane, spray the wings and other iced-up areas - et voila! A de-iced plane. The viscosity of the antifreeze coupled with the heat of the water makes it very effective at first de-icing, and then anti-icing until you can get airborne.

Hope this tip helps you out...

Ah, the MacKenzies - one of my favourite parts of the world. I've had the privilege of hiking, padding and even driving through them (once getting my Land Cruiser throughly bogged down well into the NWT side of the Canol Road past Mac Pass) but will never forget a perfect flying day from Watson over the hills and then down the South Nahanni to Cli Lake...simply magical! Lucky to be working up there, Aviatrix!

Other people most likely don't operate out of an aerodrome with no hangar space or deicing services in the Yukon in October.

Hangar space almost anywhere in Canada during the deicing season seems impossible to obtain unless you are based on the field. Frustrating when you show up in the middle of the night after being promised space by the FBO to find no room at the inn or anywhere else on the airport or even at the next one just down the road. Planes built in the desert do not like sitting around in minus 40 degree weather.

Kevin's Wal-Mart deicing trick is doable but risks the wrath of the local airport authorities as well as the aviation regulators. Besides the environmental and other liabilities, they lose out on their cut of the deicing fluid money they would otherwise receive. Nothing like furiously pumping and spraying almost 1000 square feet of wing while looking over one's shoulder hoping someone doesn't show up before you can get the hell out of Dodge City International Airport. Or so I have heard...

Just makes me want to get my sledge out, and go weeeeeeeeeeee down the hill =)

I know I'm about to admit to breaking the "golden rule" of deicing airplanes, but since we all live in the real world (with the exception of TC of course)... I've found that the thin layer of frost left over after the application of windshield washer fluid typically sublimates off and is completely gone within 5 minutes after takeoff.

With the plane I fly, which does have the laminar flow wing design, I've never noticed any change in flight characteristics, even at gross weight. Different airplanes may vary of course... but thats been my experience.

You may all now admonish my foolishness if you wish.

@ Chad:
I'm about to break the primary rule about blog comments by asking a pointed question on something I know next to nothing about, at what point did you say "hmm, I think I'll go flying in a mostly de-iced airplane today?"

Tyler: I've personally seen it done before, and my dispatcher/boss (who's owned the company for over 30 years now and hasn't done ME wrong yet) also said it would be fine.