The first day that the customers are ready to work, it is raining with low cloud, unsuitable for their job. I update my blog, do a workout, and start an e-mail to my mycologist friend pictures about the mushrooms I saw while out walking. One of the customers comes by with a truck and offers to take us anywhere we need to go. This we gratefully accept, as the temperature is about one degree, and walking in the wet at almost freezing temperatures is usually unpleasant. 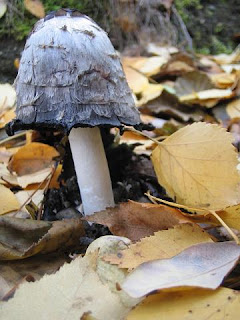 We go first to Department Store, a general store with two or three thousand square feet of merchandise. There's clothing, souvenirs, shoes, camping gear, knick-knacks, tools, jewellery and toys. Amongst the four of us we acquire a pair of longjohns, three postcards, a souvenir magnet, a cribbage board, a deck of cards and a package of instrument air filters. Hand lettering on the building next door touts it as offering Fast Food, so we try it next. It's very fast, entertainingly so, as the cook slides a smokey into a bun, hurls on the toppings and wraps the whole thing up. He made my wrap so fast I didn't see it happen. And it was good, although I admit to being disconcerted by the crunching sensation when I first bit into a crouton, inside the wrap. I thought I'd broken a tooth.

We go up to the airport next to check on the airplane. We also try unsuccessfully to find hangar guy, who still isn't answering his phone. The terminal is a historic log building, like just about everything else in town, and it's practically a museum, filled with photographs and exhibits about the place. I'm not sure all charter passengers would be comfortable waiting for their flight while surrounded by photos of famous air crashes and remnants of airplanes dredged out of Watson Lake, but I'm fascinated, and the place is warm, very clean and well lit. The airport operations guy is there, so I have a chance to compliment him on the terminal. He expects that hangar guy will have room for us, but doesn't know where he is, even though I quiz him about whether he has a cabin or a favourite hangout. It's a town of 800 people and hangar guy is a long term resident and business owner, so it's not an unreasonable expectation. There's no bar in town except at the hotel, no Tim Horton's. Where do old guys hang out in really small towns?

The rain is turning to snow now. That's why ops guy is here: waiting to start up the snowplough if required. We finish browsing the museum displays and go back to town and stop at the grocery store. We went yesterday so don't really need anything, but it's more interesting than sitting at the hotel. A co-worker elbows me, "You were wondering where the old guys hang out?" The grocery store has a few tables and sells coffee and doughnuts. I approach a group and ask about hangar guy, by name. They suggest his home, the airport or his brother's place. Enough people know we're looking for him now that he's sure to hear about it.

The snow is fairly heavy now and staying on the ground, but it stops before it reaches any depth. We go back to the hotel and my co-workers play cribbage while I finish e-mailing about mushrooms. Later that night I hear my chief pilot being introduced to hangar guy, and I come out to meet him, but it turns out that it was just a telephone introduction, via the hotel proprietor. And after all that the answer is no, because all the available hangar space is spoken for by the float plane owners who will be taking their airplanes out the water now that the snow has started.

Air Force Lodge lights just went out, shortly followed by a pop-up announcing that I've lost my internet connection. Uh-oh. Northern power failure. On the bright side--or at least the warm side--I'm pretty sure the heat is propane, and that people have lived here long enough not to be relying on electrical power to get fuel from the tank to the burner. I turn off and unplug the computer, turn off the light switch and wonder how long it takes for cabin fever to set in. I don't have to find out, as the lights are working again by the time I've made the bed.

I've switched to Blogger's new editor and it no longer has a button for adding photos on the HTML Edit tab. If I switch to the compose tab, where the photo upload option has gone, I lose all my paragraph markings and gain inappropriate line breaks. I had to put the photos in a separate post and then cut and paste the html. 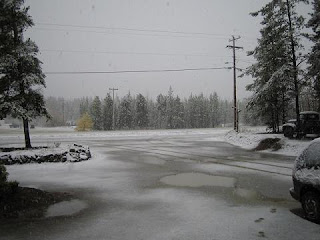 My friend identified the mushroom as a Coprinus comatus. Instead of rotting, it digests itself into black ink. I got some on my hands and it wasn't gooey or sticky. It was just like I'd been playing with a sharpie with the lid off. It came off easily with soap and water, but didn't rub off.

a package of instrument air filters ...

You're a master of continuity. That got me about 2 mins of LOLs. I love the atmosphere, too -- felt just like I was in a snowed-in little town.

I'll never look at a box of tampons in the same way again!

The black fluid is Coprinus comatus spores. C comatus is edible, but only if it hasn't begun to blacken, and not with alcohol.
The classic recipe is to collect them before breakfast, cook gently in butter and serve on toast. Over here it's been too dry for them this year so I'll just imagine the flavour.
Your snow picture is gloomily beautiful.

irrelevant but amusing I am sure you have found similar

re: "I lose all my paragraph markings and gain inappropriate line breaks."

Don't you just hate that? I go ahead and put the photos in at the top of the post, then return to HTML mode and cut and past the code blocks associated with the pics where I want them. And then go ahead and restore the paragraph tags.

Good post as usual. I am curious about "1 degree," would you if the temperature was a bit lower said "0 degree, or 0 degrees." Never could figure this out when living in Canada, it doesn't happen much in my new environ.

If I had to read 0° out loud I would definitely say "zero degrees." It's normal to use the plural with a zero count in English. "I said no camels!" or "There were zero cars in the parking lot."

I probably wouldn't actually say "It's zero degrees," though. That sounds a little stilted. If "It's zero" by itself didn't have enough context, I'd be more likely to say "the temperature is zero" or it's "right at freezing."

I think the logic of pluralizing zero derives from "zero" being a substitute for "none" or "no". In other words, "There were no cars in the parking lot." (What were you asking me to find? CarS. How many did you see? None, zero. Therefore, there are no/zero carS.)